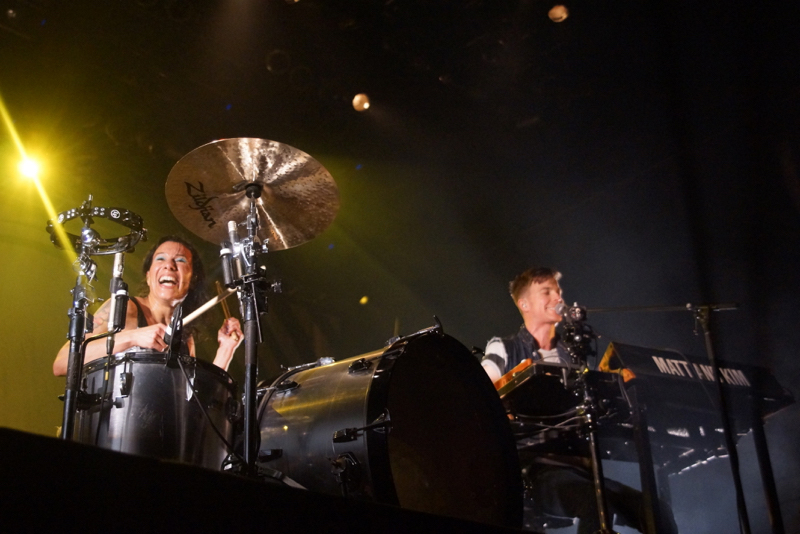 If you like Matt & Kim, unless you only just discovered them (and if so, where’ve you been?/welcome!), then you have most likely seen them live, because it is their amazing live reputation upon which their fervent fan base has been built over coming up on a decade. You’ve seen drummer Kim Schifino (QRO interview) climb atop her bass drum multiple times, and singer/keyboardist Matt Johnson (QRO interview) play keys while standing one-legged on his bench. You’ve seen them throw balloons and confetti into the crowd. You’ve probably even checked out Schifino’s ass when fans hold her up so that she can bootie-dances over the crowd. So what more is there for one to catch at a Matt & Kim show these days? A lot – plus the classics, like when they played two sold-out nights at New York’s Terminal 5 (QRO venue review) on Thursday & Friday, May 14th & 15th. 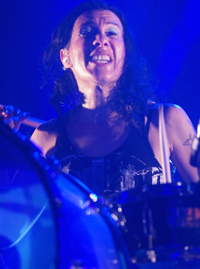 Matt & Kim were returning to their hometown venue (QRO photos of previous T5 performance) touring behind their new record, New Glow (QRO review). By this point, the duo have enough albums & songs that they have to pick and choose – and some of your favorites are going to be left off of the set list. Many of their songs are punk rock-short, but they use that extra time with all of their banter and stage antics – and use it well. At Terminal 5, there were the ‘usual’ Matt & Kim stage acts, like throwing out uninflated balloons to be blown up and bounced around, or Schifino being held aloft by the crowd to bootie-dance. But the band acknowledged that these were things that they’ve done before: Schifino mentioned needing the balloons to get bounced to the back to make up for her lack of throwing distance (not due to her buff arms, but the un-aerodynamic uninflated balloon form), while Johnson detailed why they weren’t retiring the bootie-dance (“The crowd needs that bootie, and that bootie needs the crowd…”). They even commented multiple times on how often Schifino says ‘fuck’, “She’s like a painter with how she uses the word ‘fuck’,” describing the warning on a concert poster of her inappropriate language (which even 2chainz’s poster didn’t get – so “Kim might be more bad-ass than 2chainz…”), or pointing out a dad ear-muffing his daughter as Kim spoke. 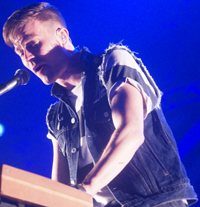 But there was more. Johnson got everyone to put one hand in the air before “Cameras”, while Schifino called for crowd-surfers before “Lessons Learned” (noting that a guy had surfed “dick-down,” but she prefers to surf with the other side up and get her ass grabbed, not her vagina…). Johnson got finger-guns from the audience at one point, while Schifino got her ladies to get on shoulders before her “Ten Dollars I Found” (Johnson added his request for a double-shoulders, “totem pole”). The band extended a fifty-foot parachute over everyone that it could reach, and got those under & outside to shine their camera flashlights for “Cinders”. Johnson strapped on a guitar for “Much Too Late”, Schifino noting how hot he looked, Johnson interpreting that to mean that no one looks hot playing keyboards, and Schifino reluctantly agreed.

He put that guitar on because the duo were signing it and raffling it for the night’s no-kill animal shelter charity – named “Badass Brooklyn Animal Rescue”, of course. Schifino couldn’t even get through her charity speech without getting dirty (“She’s the Benjamin Button of maturity,” Johnson remarked, “As she gets older, she gets less mature…”). At other times she mentioned queefs, “Everybody gets laid,” showed off her flame tattoo above her groin (pointing out that she was in between laserings down there…), telling guys to put Gold Bond on their crotch, taking her shirt off for the last song “It’s Alright”, and, yes, even talking 50 Shades of Grey. As Krusty the Clown would put it, “Talking about stuff that would embarrass Redd Foxx – God rest his smutty soul.” 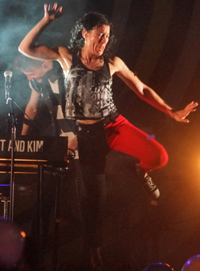 Oh, and there was music to boot. In retrospect it is easy to get caught up in the between-song material, but at the shows it is easy to get caught up in Matt & Kim’s sheer musical energy. “They can’t be stopped,” Johnson remarked after the crowd went wild during opener “Overexposed”. For a tour behind a new album, the performance was not as weighted towards it as one might have expected with only five songs out of twenty (prior record Lightning – QRO review – had seven), but included the best like “Make a Mess” (appropriate), “Hoodie On” (though it was too sweaty for that), and “Can You Blame Me”. And there was still time for oldies-but-goodies like the first song they ever wrote, “Silver Tiles”, Johnson solo on “Lightspeed”, and into the encore break with “Daylight”. 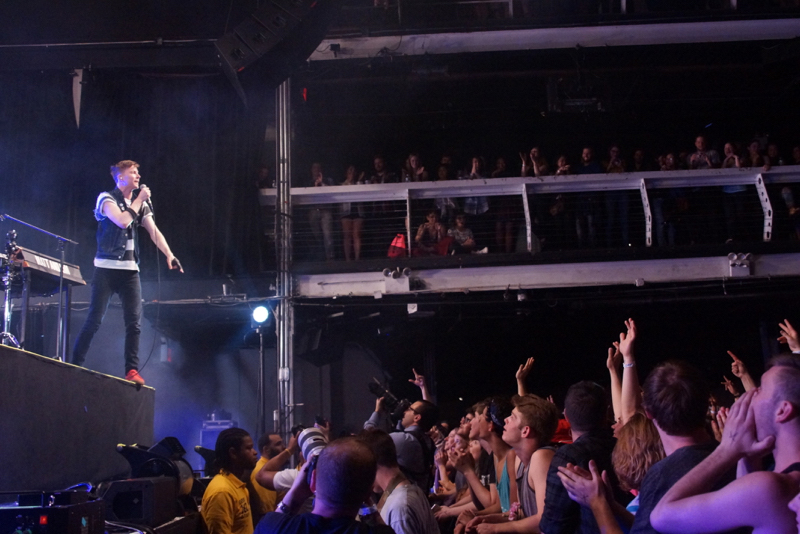