Matt Pond – The Lives Inside the Lines In Your Hand

Matt Pond might not break through with The Lives Inside the Lines In Your Hand – but he deserves to.... 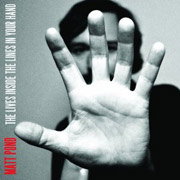 Philadelphia-to-New York singer/songwriter Matt Pond has been making music for fifteen years now, but has never quite broken through to the big time.  He’s too alternative for the pop-country/rock that litters the mainstream, despite doing what they do, just way better – but that also makes him too mainstream for the hipster crowd.  He’s also too prolific for his own good, never satisfied to let a strong full-length from his band Matt Pond PA stand and grow on its own, but instead constantly tacking on extra EPs (QRO review).  Pond might not break through with The Lives Inside the Lines In Your Hand – but he deserves to.

Matt Pond’s first record since dropping the ‘PA’, Lives is a decidedly bright affair, but one of earned brightness, after the rain.  That comes through most clearly on opener “Let Me Live”, but there’s also a natural expanse to middle track “Go Where the Leaves Go” and pressing into brightness with “Hole In My Heart”.  Pond’s upbeat power-pop is best in second song & single “Love To Get Used”, which manages to encapsulate what’s great about MP.  Admittedly, Lives is weighted towards the front, with “Let Me Live”, “Love To Get Used”, and the ‘letting go’ Pond uplift “Starlet” one-two-three on the track listing.  Meanwhile, final three “Human Beings”, the title track, and “Strafford” don’t stand out as much in their sweetness.

Wherever Pond calls home, he’s clearly comfortable in his skin and showing it to his fans.  And his sheer enjoyability is all that you need.

Matt Pond – Love To Get Used