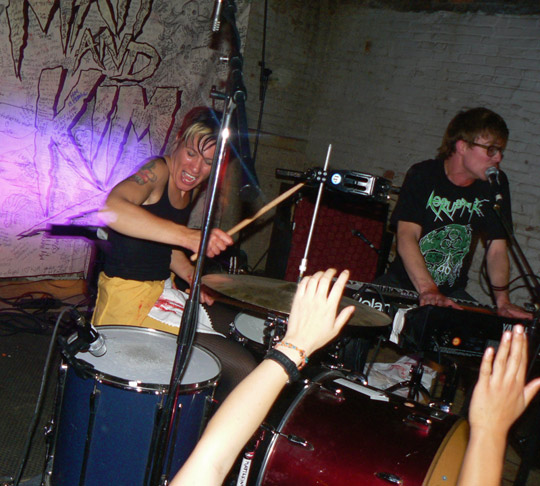 Click here for photos of Matt & Kim at Hammerstein Ballroom in New York, NY on Halloween ’09 in the QRO Concert Photo Gallery

Click here for photos of Matt & Kim at another Todd P show in Brooklyn, NY on June 22nd, 2007 in the QRO Concert Photo Gallery

Matt + Kim + Halloween + Brooklyn = crazy, crazy times.  In the run-up to next year’s release of the long-anticipated Grand, Matt & Kim are touring the Northeast and Great Lakes area this November – but started things off at home in Brooklyn, with a wild show on Halloween.  Playing DIY concert impresario Todd P’s new Danbro Studios warehouse (QRO venue review) after about a million bands, Matt & Kim were high on life as they rocked the hyper crowd with new songs & classics.

Expectations are naturally raised for Halloween shows, and they should be, because, as singer/keyboardist Matt Johnson pointed out, “I know you had options – I sound like an airline, ‘Thank you for choosing us…’”  In addition to Greenwich Village’s infamous Halloween Parade up 6th Avenue (with an after-party, featuring Apes & Androids and Dirty Pearls, at (le) Poisson Rouge – QRO venue review), there was Ryan Adams & The Cardinals uptown gig at the gentrifying Apollo Theatre, Black Crowes + Patti Smith at Hammerstein Ballroom (QRO venue review), Polysics & Jaguar Love (QRO spotlight on) at Bowery’s Mercury Lounge (QRO venue review), the second night of MGMT’s two-night Halloween show (QRO live review of night one) right there in Brooklyn at Music Hall in Williamsburg (QRO venue review), plus some huge event just nearby in Bushwick that seemingly everyone on the L was headed towards, and much more.  And the massive line-up of acts, including Japan’s DMBQ (QRO photos), Baltimore’s Ponytail (QRO photos), locals AIDS Wolf (QRO photos) – a.k.a. the band that killed the trend of ‘wolf’-named bands (QRO’s Indie Wolves) – and Britain’s Homosexuals (QRO photos), among others, meant Matt & Kim were scheduled for one AM – and didn’t go on until after two!

But the duo rewarded patience with an excited set, even by Matt & Kim standards.  As Johnson said, “This feels more real to me, even with all the costumes…”  The crowd was certainly decked out – no too-cool-for-costumes hipsters here – in everything from Waldo (of Where’s… fame) to a guy in a Christmas lights suit (QRO photo) – though some skinny hipster really should have put on some horn-rimmed glasses and gone as Matt.  And Matt & Kim reciprocated, Kim in a nurse’s uniform and Matt, a bloodied chef (as if taken from all their videos, which all seem to feature fake blood and are set in a kitchen – and looking even more like a young Dexter with glasses).  It certainly made for a very colorful crowd at the otherwise dank & spooky Danbro Studios warehouse (which also had Pet Cemetery playing silently on a loop, projected onto a wall overlooking the stage floor).

While their 2006 self-titled record still dominated the proceedings, the first half of Matt & Kim’s set did include a few new numbers.  One was "Spare Change", a little slower and sadder fare from the notoriously happy & fast duo, showing some range one hopes will continue on Grand.  Another was “Good Old-Fashioned Nightmare”, a song they were only trying for the second time live – and they said the first time hadn’t gone so well.  Thankfully, this time was a good old-fashioned good time, with the crowd easily singing along.

But when in Brooklyn, the hometowners have to play the ‘hits’ for the hometown crowd, and Matt & Kim did that with such uproarious pieces as “Silver Tiles”, “Yea Yeah”, “Lightspeed”, and “It’s a Fact (Printed Stained)”.  They also hit up instrumentals like Matt & Kim’s “Grand” (which presumably will be on the titular record…) and a newer eighties-synth piece (that went very well with Pet Cemetery).  And like all their shows, it did feel like it went too fast – the late hour, plus the inebriated and rowdy (if good-naturedly so) crowd, probably shut things down a little quicker than usual (though having a wild band like Matt & Kim on after two AM, after several other acts, on Halloween, with a tour manager/security man dressed like a clown (QRO photo), in a dark, dirtybegged the people there to get drunk and crazy…).  With CMJ and Halloween now past, New Yorkers have a couple of cold months of fewer and fewer bands to look forward to – but Matt & Kim left something warm to tide us over until the new year and Grand.