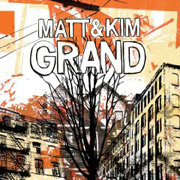 Matt Johnson (vocals/keyboards) and Kim Schifino (drums) paired up and blew up playing Brooklyn house parties a few years ago, delivering hyper-energetic sets that were known for the young crowd going crazy right from the get-go, crowd-surfing at the first note, along with Johnson’s hilarious monologues (often delivered while standing on his keyboard chair), beginning/ending shows with “I’m Matt, this is Kim, and we’re Matt & Kim!”  Cross-country tours, festival appearances, two releases (2005’s To/From EP and 2006’s Matt & Kim), and more all followed, as the band gained notoriety in many circles.  Now all that energy and momentum goes into the much-anticipated sophomore full-length, Grand.

First things first: Grand cannot completely capture the energy of a Matt & Kim show.  But no record could, unless there was a dance party going on right in front of your stereo.  Their previous releases played it relatively simple, giving a straightforward recording of their material, which unfortunately did tend to have tracks sound rather similar to each other.  But on their new record, Matt & Kim have embraced higher production values.  It sounds like they were taking advantage of greater technical specs that were available to them from FADER magazine’s new label, but, in actuality, it was all recorded in Johnson’s childhood bedroom in Vermont, and produced by Johnson before label involvement.  The higher quality no doubt helped them sign to FADER‘s label, delivering a record that does get a little further away from the band’s much-heralded live experience, but is altogether more varied and interesting.

Grand was preceded by the release of two early downloads/singles, “Daylight” and “Good Ol’ Fashion Nightmare”.  Those two pieces are bright, and show off such new studio effects as double vocals from Johnson (“Daylight”) and strings-like-keys (“Nightmare”).  “Daylight” tends a little more towards the skill, expertly bouncing off itself; while “Nightmare” (paradoxically) goes more for the sunny fun with a big stomp/thump beat out of Schifino that sways.

While both pieces are strong, they are not, however, wholly representative of Grand.  The slower tracks, like “Cutdown”, “Spare Change”, and (also paradoxically) “Don’t Slow Down”, are unfortunately a little forgettable, lacking in Matt & Kim’s quintessential energy.  But then there are change-ups like the high, and slightly sad, “Lessons Learned”, the stripped and cute keys with “Turn This Boat Around”, and the finishing “Daylight Outro Remix”, which takes the opener and goes darker (though “Boat” might have actually served better as a finisher, especially if you’ve got the CD/playlist on repeat, and go from one “Daylight” to another).

But Grand is not without the big, bombastic pieces to accompany “Daylight” & “Nightmare”.  There’s the spastic instrumental “Cinders”, which follows in the footsteps of Matt & Kim’s “Grand” (paradoxically not on Grand…) in bringing the duo’s live sound to record, especially Kim’s drumming.  Following that is their ode to New York, “I’ll Take Us Home”, which carries with skill.  And in the middle of the record, “I Wanna” matches Matt & Kim’s hyper-ness with slow, expansive parts, making a great mix of the two main strains on the record – along with being really catchy.

After blowing up from virtual DIY beginnings, Matt & Kim managed to stick to that while making a record that sounds like it took advantage of the bigger sound more money affords, which is how other blowing-up young bands do it (such as Annuals’ recent sophomore release, Such Fun – QRO review).  Those weaned on the band’s live shows might be disappointed that you can’t quite get it on a record, but the pair were wise not to try to ape that unique experience.  Instead, Matt & Kim went, well, ‘grand’, putting as much effort into recording in the studio as they do into performing at a house party.