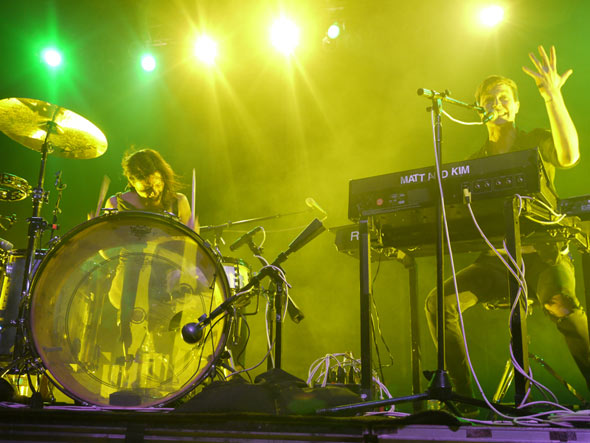 WFNX’s second night of the “Miracle on Lansdowne Street” at the House of Blues in Boston brought one main ingredient – energy.  The unfortunate souls on Lansdowne Street, who didn’t have a ticket Friday, December 9th, had to at least think to themselves from the roars heard inside, “Who’s playing tonight?”  Those heading to Cask n’ Flagon or Tequila Rain were likely thinking they were heading to the wrong place – and they were.

The supporting bands, Mean Creek and Mutemath, fed off the crowd (and vice versa) and the energy steadily built until finally reaching the end of the night’s climax with headliner Matt and Kim (no pun intended, even after all the sexual stories and innuendoes made throughout the night – we’re looking at you Matt and Kim!).  It was a typical WFNX atmosphere from the get-go, starting with Boston-based Mean Creek.

It did seem the majority of people in this Boston crowd knew little about Mean Creek but the four-piece definitely won over that last, small percentage of Bostonians that hadn’t heard them yet.  At least we know now Boston is on the same page with this band.

It would be easy – too easy – to say Mean Creek is a reminiscent mix of Explosions in the Sky (QRO album review) meets Cold War Kids (QRO live review), but they truly have a sound of their own that will not, and has not, gone unnoticed.  The loud, heavy guitars and thumping drums overlaid with lead singer Chris Keene’s sometimes melodic, sometimes powerful bellows, welcomes us back to the ‘90s and screams, “DON’T SLEEP ON US!”  Most of Boston has figured this out already.  After being named ‘Boston’s Best Act in 2010,’ The Boston Phoenix has now named Mean Creek’s Hemophiliac album of the year.  The emotion displayed on stage showed that a big part of this recent success stems from the camaraderie on stage.  This won’t be the last we hear of them especially with their new album dropping spring 2012; ask WFNX, “They’re the best Boston-based band since The Pixies!” 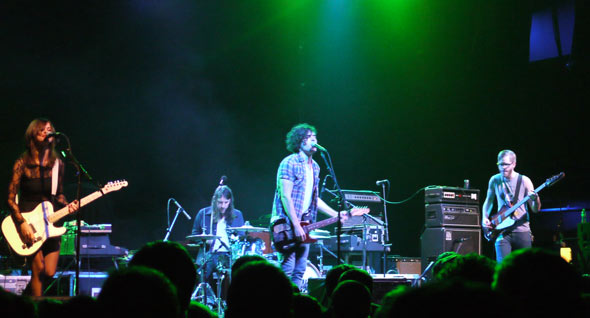 …And that was just the first band.  Hailing from New Orleans, alternative rock band Mutemath took the saying of “working the stage” up a notch when they worked the whole venue.  There was as much time spent in the crowd, on the crowd, and above the crowd as there was on stage.  After sifting through the eager bodies from the back of the House of Blues, finally making it on stage with drums and tambourines in hand, Mutemath began their electric, up-tempo set.  If there was any doubt that you would enjoy them, it was quickly diminished by the abrasive, in-your-face antics of lead singer/keyboardist/keytarist/whatever-else-he-can-get-his-hands-on, Paul Meany, who played with the crowd throughout the set – first by hopping down to the photographers pit, then lending his futuristic-looking keytar to the front row for fans to solo on, and ending it with laying on top of the hundreds of hands in the pit.

This was a rock show that was nothing short of awesome and surpassed all expectations for the Mutemath virgins (maybe a little pun intended on this one…).  The dark lighting and simple black backdrop complimented the band quite well by providing a certain spacey aura feel.  Their dreamy ambience set really took off when crowd favorites “Typical”, off their self-titled album, and the new “Blood Pressure” from their most recent product Odd Soul, quadrupled the number of hands raised and propelled them into a frenzy.  Mutemath brought that southern hospitality all the way up to the Northeast where they made sure this crowd was having fun in their own environment, since it felt like many didn’t know much about them aside from their singles.  It was quite the rockin’ psychedelic space trip but as entertaining as they were, the anticipation had been building for only two people the whole night.

Photos of Matt & Kim at Hammerstein Ballroom in New York, NY on Halloween ’09

With a Brooklyn-esque apartment building backdrop, the fiery Matt and Kim (Matt Johnson – QRO interview – and Kim Schifino – QRO interview with both) came storming out from the side stage, engulfing the venue in screams and loud cheers from all those in attendance.  The enthusiasm they had right out of the gate was unreal; screaming, pointing, running around the stage, and showing love to the 2,000 strangers that stood in front of them before playing a single note.  It was a yell-fest the first minute or so they stepped on stage before jumping into “Block After Block” and having this crowd go absolutely ballistic.

Schifino, with her never wavering huge smile, provided punch after punch that rattled from her drum kit into the crazed bodies in front of her.  Her crowd-surfin’-booty-dancing ritual where she balances on the hands of fans and

breaks it down of course made an appearance, along with Johnson’s keyboard (half) handstand.  It’s always refreshing to see such a unique duo bring such a unique style to their shows.  It’s evident that they truly love what they’re doing and it’s easy to appreciate a band that brings this much energy.

“I’ve said it before and I will say it again, Boston has what I motherfuckin’ need!” shouted Johnson before jumping into “Yea 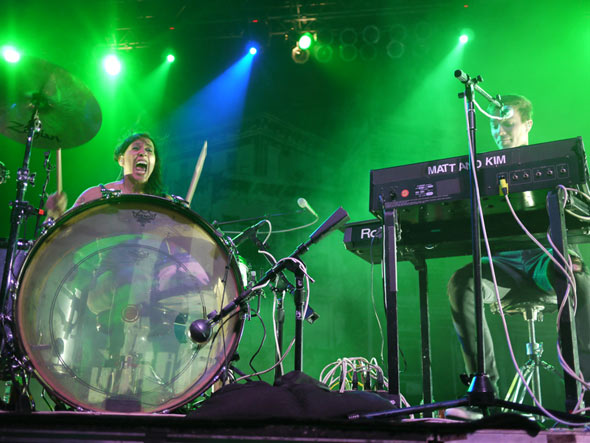 Yeah”.  Throughout the night he constantly commented on the love that they have towards this city.  They had just played at the same venue earlier this year and when asked to come back, Johnson said they jumped at the opportunity.  It’s good to know they feel comfortable here – they even gave an uncharacteristic kiss on stage for the crowd.  The display of affection echoed how much fun they were having.  “This is only the second time I’ve done this on stage,” replied Johnson.

Favorites such as “Good For Great”, “Good Ol’ Fashion Nightmare”, and “Cameras” kept the momentum alive.  “Northeast” gave everyone a little bit of a breather but cue the crowd surfers, and wave of bodies bouncing up and down in unison again just three short minutes later and everyone had started right where they left off when Matt and Kim busted out their fastest song, “Cinders”.

Energy drinks?  An abundance of coffee?  Hyperactive drugs?  Who knows what fuels Matt and Kim?  Whatever it is, someone make sure they continue to always have enough of it.  Schifino said it best: “Motherfuckin’ fire Boston, motherfuckin’ fire!” in response to the night – and that was before ending it with the biggest roar from the night as they began playing “Daylight”.

Note to self (and everyone else): Don’t ever miss another Matt and Kim show when they stroll through Boston. 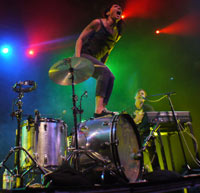