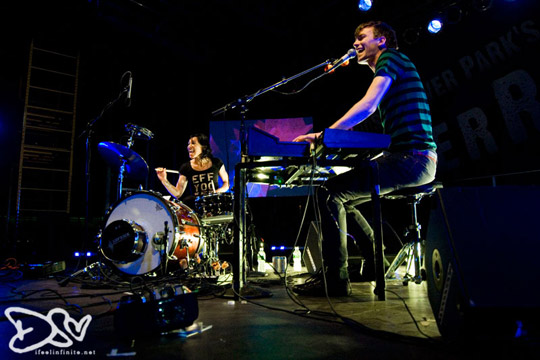 Matt & Kim do give the hipster-haters a lot to work with.  There’s their super-cheery attitude, all smiles and hyper-kinetic energy.  There’s their music, not over-complicated in just vocals, keyboards, drums, and songs like “Yea Yeah”.  There’s their popularity, propelling the band out of Brooklyn house parties and onto the national stage.  And then there are their fans, über-young, über-excited, and über-active.  But if you don’t like ‘em, you don’t have to see ‘em, and for those who embrace the duo, Matt & Kim (QRO interview) certainly give back in their wild live shows, like theirs on July 9th to kick off the 2009 RiverRocks season at Hudson River Park’s Pier 54. 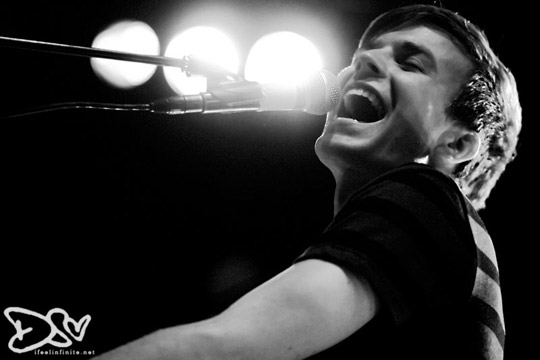 Click here for photos of Matt & Kim at Music Hall in Williamsburg in Brooklyn, NY on January 22nd, 2009 in the QRO Concert Photo Gallery

Pier 54 is an unusual venue (QRO review), and was made even more so by Matt & Kim & fans.  An actual pier, it juts out into the Hudson River from the west end of 14th Street in Manhattan, and the stage is located at the far end, making the stage floor very long, and while wide relative to other stages, thin compared to its own length.  A free, all-ages show, kids were lined up down the blocks along the Hudson for Matt & Kim (singer/keyboardist Matt Johnson – QRO interview – was even seen photographing the massive line).  Doors only opened a half-hour before the first band, Team Robespierre (QRO photos), was to go on, so those who came very early got to be right up at the front for the whole event. 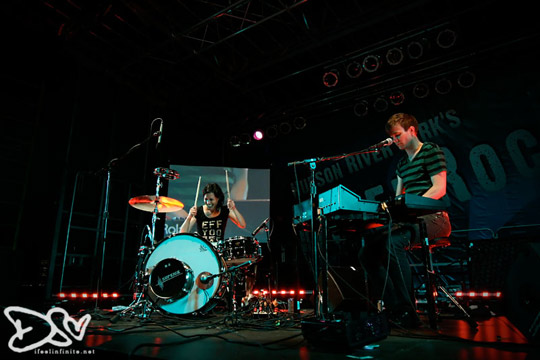 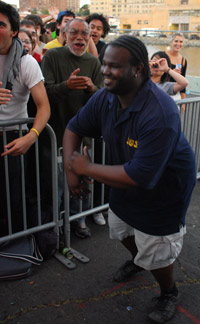 And it was an ‘event’.  Late-adds Team Robespierre kicked it off, but it was DJ duo Flosstradamus (QRO photos) who surprisingly really lit the early evening up.  It would seem like the energetic-if-sloppy punk of Robespierre would be the more fitting of the two for Matt & Kim, but Flosstradamus (who have played with Matt & Kim before – QRO photos) turned the front of the crowd into a dance party – even had the security guys with their hands in the air at times, and busting the occasional move.  Security also had to keep the front of the crowd from pushing too much against the photo pit barrier, not to mention handle a crowd-surfer & shoulder-rider or two – it all presaged the craziness that was to come. 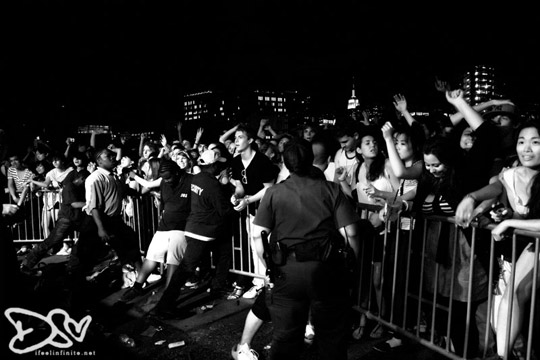 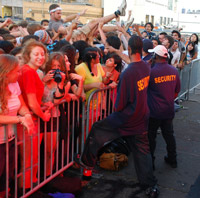 Matt & Kim shows have always been known for the crowd going wild, and the band has kept that as they’ve moved up from house parties to Pier 54, the largest venue they’ve ever headlined.  People were crowd-surfing pretty much from the first notes of opener “It’s a Fact (Printed Stain)”, sometimes getting surfed right into the photo pit, where security ended up having one man watch for surfers coming in, while the rest held the barricade line.  Those who got to see the entire show up front also had to deal with being crushed from behind for the entire show. 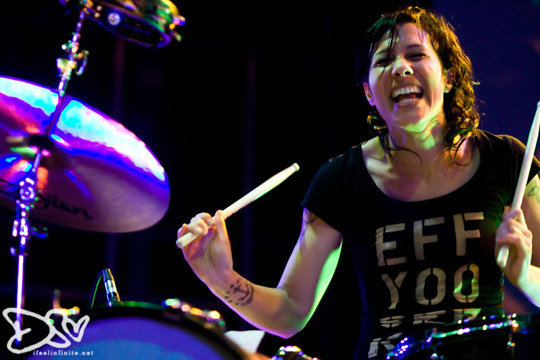 That energy & fervor was mirrored on stage by Matt & Kim.  Johnson opened the show by saying that the pair had just seen Beyonce at Madison Square Garden, and felt they needed to “step up our shit, and this feels like we’ve stepped up our shit!”  Kim Schifino promised some “surprises”, which included her throwing CDs into the crowd, later crowd-surfing herself (she did thank the security guys for saving her when she came back, with which Matt added, “But they didn’t grab your ass, did they?  ‘Cause then…” and jokingly shook his fist in the air), and Johnson busting out a t-shirt cannon.  He still had to play, so he handed it off to Autobot (Curt Cameruci) of Flosstradamus, who launched many a shirt into the air (hopefully none went into the Hudson…). 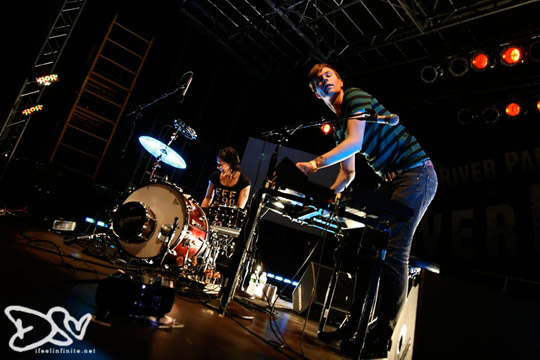 Coming off their release earlier this year of sophomore LP Grand (QRO review), Matt & Kim drew from it and the self-titled debut full-length that got them so much attention (even threw in some oldies from debut EP To/From).  They sped it up for instrumental “Cinders”, and slowed it down for “Lightspeed”, though they’re always pretty fast.  Johnson threw in some 80’s synth riffs at times, like when Kim was crowd surfing.  It was all amidst Matt & Kim songs like “Yea Yeah”, “Cutdown”, “I Wanna” (“It’s about how I never want this show to end for the rest of my life…”), “Good Old-Fashioned Nightmare”, and “Silver Tiles” (“This song goes out to NYC being the first place we ever played, and hopefully the last, right before we die, because I want that on my tombstone!”), ending with single “Daylight” (the one made extra-famous by their music video, which sees the pair walking down Times Square, shedding clothes all the way down to the a-naturale, in winter – ends with cops busting them, and them breaking away). 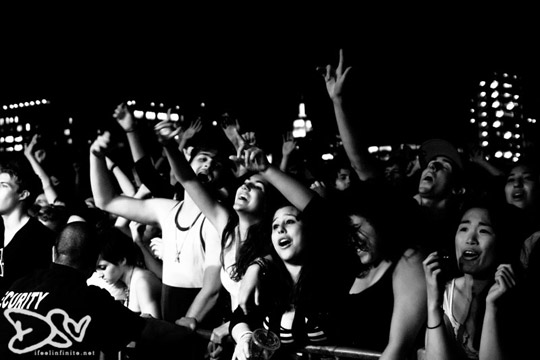 Click here for photos of Matt & Kim outdoors as part of the Siren Music Festival on Coney Island, Brooklyn on July 21st, 2007 in the QRO Concert Photo Gallery

Yes, your experience at the show did depend on where you were standing, whether crushed up front with the super-fans, or farther back with the rest (there were large display screens behind Matt & Kim, with video of the performance streaming for those further away).  And yes, it was a show that hipsters would have hated, from the hyper kid crowd to Matt & Kim’s profusions of thanks to their fans (“We get to do this because of you!” – Schifino; “Fourth of July, we played Disney World with DJ Jazzy Jeff … Let me tell you: there is nothing real about Disney World, and there is everything real about this situation…” – Johnson).  But let the haters have their hate, and let the kids have their fun. 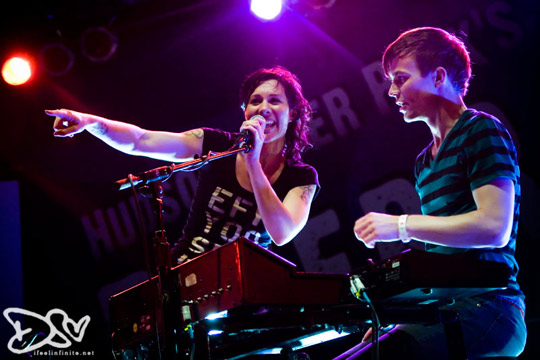