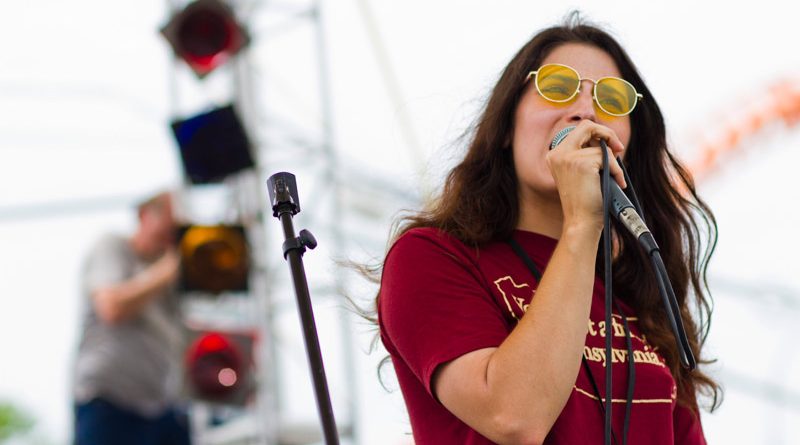 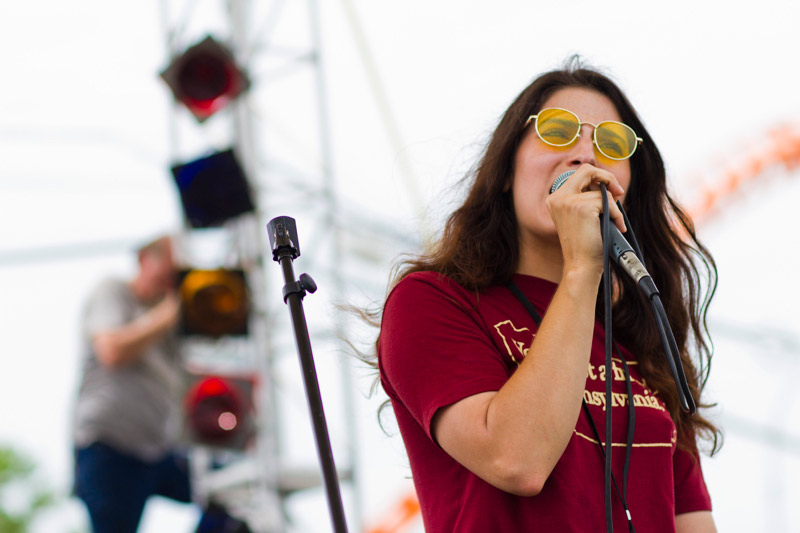 The Joycean novel entitled A Girl is a Half-formed Thing by Eimear McBride received a great deal of veneration in the literary world for its blazingly beautiful depiction, in stream-of-consciousness prose, of the psychic fracture endured by an unnamed female character inhabiting a society of equally appellation-free people, who all live inside an adumbration of Ireland that possesses not a single epithet denoting real places or dates. Rather than feeling like a jumble of blank nothing tangles the story, that book feels instead like everything mismatched is ad hoc and the natty nubs of the narrative somehow sing in tameless harmony. Atina Mattiel Brown, known to the music world simply by her given name of Mattiel, seemed to have strode straight out of that selfsame fictional obsolescence orb on Saturday, February 22nd, when she brought her Satis Factory tour for a hometown pit stop at The Earl in tragically hip East Atlanta. Though “half-formed” would be the very last term anyone could equitably choose to befittingly render the artistic ubiety she uses to unsympathetically remind that no frame can hold her, and none should try. Like the book, and to put it in overwrought internet slang, Mattiel is everything.

Click here for photos of Mattiel at 2017 Burger Records Beach Bash in Brooklyn, NY in the QRO Concert Photo Gallery

The primary property to headmost admire in her is that she wantonly outdares all genre, including most attempted amalgams. If you have been quietly hoping for the Meryl Streep of mood rock, Mattiel has got you thoroughly covered. Her signature eerie, reverb-drenched warble-screams sound like crow poems. There is some hearkening to Grace Slick in the shrewd scowl of the vocals. There is also something like post-Mick Marianne Faithfull pitched off a cliff. Mattiel projects elements of inchoate normcore extrapolated through Kathleen Turner with a peck of Blondie-style aloofness and all the brusque cool factor of Nico. She is underdone rather than understated, the acme of all things amorphous, an isoelastic Isis operatically derived from some obliging splinter faction in the more penumbral aspect of Cher.

In order to begin to appreciate Mattiel properly, you must a) have the valor to admit aloud your childhood dreams and b) mentally sojourn to the U.K. for a minute. There exists in Southampton, England a collective of open thinkers, unapologetic darers, brave idealists, and determined star-gazers called The Silver Boots Supper Club, run by the fiendishly splendiferous Stacey Heale, and for whom the official incantation is: “Wear the silver boots.” This psalm is intended to remind all Silver Boots participants and onlookers not to let their lives pass them by whilst they idly trill about some pie-in-the-sky day in the unforeseeable future when they will start to follow the true compass of their hearts, but rather to recognize that that dream-day is actually now and thus not to let fear pickpocket the possibility of even their most Walter Mitty of aspirations. Mattiel is bob-slinging, mic-howling proof positive of what is within reach if you will just wear the damn silver boots.

The now fanciful prelude tale of how Mattiel made her way from MailChimp graphics maven to beau ideal balladeer is the silver boots inspiration story of the past year, and, perhaps most gratifyingly, involves no hat trick element in her journey from the cubicle all the way to Jack White’s door. She simply did that thing the ancients used to call grind, keeping chiefly to herself and working as hard on her songcraft in her spare time as she did on her daily designs at the office. The difference is she did it purely for herself, and with no thought or belief that it could ever be much more than her unpaid creative outlet. Mattiel’s initial background in visual art and marketing illustration is integral to understanding the overtone of her music. She lays songs out with the same kind of blocky, high-minimalist balance that would characterize a strong webpage. Her self-titled debut album, released in 2017 by the infallible Burger Records – who signed her sight unseen – revealed her to be a swami of the elusory, a writer of cagey and polysemous lyrics for highly personal, almost psychosomatic stories that managed to resonate as something antiquarian and familiar.

Sometime after that first album, Jack White stepped in, much to Mattiel’s continued disbelief and joy. She has scarcely gone a sentence on record or off without citing his influence on her desire to do music in the first place. White vocally championed her merits as an artist and took her on tour with him as an opening act in early 2019. Barely two years out from her first record, Mattiel has now played everywhere from Jools Holland to a noteworthy three sets on three separate stages at Glastonbury. With last year’s Satis Factory, her much-celebrated second album and reason for being at The Earl this night, some further recurring thematic bents she shares with her Third Man lodestar emerge – a powerful emphasis on the dangers of complacency in any of its many corrosive forms, altruistic biblical references that sound more like verbal pogroms the way she uses them, blues-minded backstories, and even a predilection for a certain prowling lead-in bass beat – to say nothing of their shared furniture-making divertissements. Cosmic alignments galore and the most bewitching exemplar of what this writer’s father always taught was the true biomarker of success: that moment when your heroes become your peers.

Alternatively quasi-swallowing and fight-dancing with her mic at The Earl, Mattiel paid hallowed homage to Jack in an unearthly cover of “The Air Near My Fingers” off 2003’s seminal White Stripes album, Elephant. She also commendably saluted her opaque punkish lineage with a harum-scarum version of The Clash’s “Guns of Brixton”. In her presentation of some of her own songs, you could almost see her in a silo somewhere within her own imagination, synthesizing garage into goth into country rock into some enigmatic Lethe-like loci where the music forgets its own hard tag and just becomes whatever she commands. In video-fave “Food For Thought”, which she has described to Paste Studio ATL as a “kind of spoken word song,” one could be knocked sideways by how deeply Atlanta she is. Her dance is all self-aware shoulders and crooked back. Her attitude as she is singing about empty promises and flimsy nostalgia all nebulous nerves. In other places, like “Keep the Change” for instance, she sounds as cocksure and schismatic as Alex Kandel of Sleeper Agent, and with all that Kandel-like almost-baritone too.

A word about Mattiel’s success in this particular venue is necessary to entirely acknowledge her melodic might. For those who may not know, East Atlanta can be highly affected. There is at times a fair deal of raffish, scruffy-same strutting that goes on, and the flurrying street-snootiness associated with too many copies of copies of copies of cool meticulously curating identi-tuff looks in dirty, rented mirrors. Brassy, black-leather parlor poses that some of the locals presume visually allude to CBGB aesthetics domineer, pitiably, without the wearers ever realizing that the clothes came from the ethos and that you would have to have the ethos before the clothes would have the same meaning as when Joey Ramone wore them. These people bond over the agreement that nothing is cool (except themselves and their artisanal lagers, naturally). So, that Mattiel had this crowd thrashing in panegryics like 13-year-old Shonen Knife fans? Yes, you may kiss her silver boot now.

Part of Mattiel’s gravitational appeal is her willful failure to look like a rock star. There is a way to be nondescript where you are invisible wallpaper. Then there is the other way to be nondescript where you can be anything at all in a split chameleonic breath. Toying with iconographic imagery relative to the sports of tennis and dressage, industrial warehouses, Southern state fairs, the deserts of the American west, and the kind of ugly-pretty, high-sequin prom dresses Miss Havisham from Great Expectations might have worn had she bothered to go to prom in 1986, Mattiel is a ballgown on the Bowery.

Her optic style is slick, but with a gothic grammar and the quirky livery lexicon of a librarian who also happens to be a lush. She reminded me more than once of a professor I had at university who looked for all the world like your harmless neighbor cat lady, but also jovially drunk-pissed herself in front of every one of her prestigious international colleagues at the end-of-term bash as she effortlessly out-partied all of her students – and I intend all of this as a massive compliment to Mattiel. Not everyone can appeal in equal truth to the fun-strumpets and the doyennes of inceldom in this world. Not every voice can keen balefully but without a droplet of minacity. It is too dismissive by a monstrous measure to revert to the spent “still waters run deep” platitude when venturing to describe Mattiel. She is woman enough to recognize, and have the stones to present, the fact that womanhood cannot be so spiritlessly boxed, and she shows an admirable lack of ego in raising blasé brows at anyone who makes it their miscarried business to try. It is a rational race of rock she vends and there is no place for cheap sweet talk.

Even a microscopic examination of the sartorial spheres of Mattiel lends one no specifics as to the engine of the shapeshifter inside. She has been professionally photographed wearing a clear, glass-like cowboy hat, and then shot a video for “Millionaire” wearing a rodeo-meets-sombrero version featuring chandelier beading. She is Kings of Leon crate-digging with Jemima Kirke. You are as likely to catch her in a Penny Lane-esque, fur-trimmed coat of leather patchwork as you are to see her flash a tiny black bra under a silver, big-shouldered ‘80s blazer, as she was doing on the night of the Earl show, invoking no one so much as Annie Lennox circa that second life-altering Eurythmics album. Mattiel, a bonafide curio and clearinghouse of a dame, managed to look both disco and new wave, but swellegant too – like a competent but severe rock-n-roll receptionist at a record label in the clouds that happened to be run by LeeLoo of The Fifth Element. She is certainly something quantum and droid-like in the best sense.

Unlike her peers in the nymphet nebula of one-moniker wonders, the sensation is that Mattiel likely threw her other names aside for the ergonomics of streamlining rather than the suggestion of all-encompassing fame or self-importance. Multiple names, like classifications, were just one more extraneous thing that she did not need impeding her gumption and one more stock detail to leave as front-footed and scant as possible. Mattiel is a reverse Monet where “Monet” means what it did in Clueless. She is many, many dashes and dots of gorgeous color, yet whether you stand back from the painting of her personage or lean close enough for your nose to touch, she gives nothing away about the bigger picture or how all of these banderoles should intertwine, or even if they should. Come see Mattiel if you need your childhood dreams jumpstarted or kicked lightly in the rear. No doubt she will make even the wallop a wonderment, and there is much more than an outside chance you will be instantly emboldened to march right out and seek your own sterling footwear.