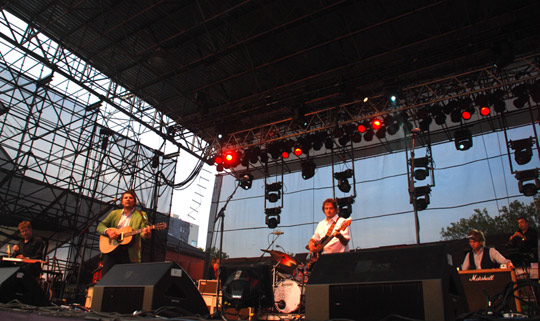 Note: As of August 30th, 2008, McCarren Park Pool, the venue, closed for good.  The space was refurbished into an actual community pool (using funds generated by its time as a concert venue).

The entrance to McCarren Park Pool is on Lorimer Street, between Driggs Avenue and Bayard Street.  It was an actual community pool, an F.D.R./Fiorello LaGuardia/WPA-style ‘great public work’ that had once served as a major social hub in the Greenpoint/Williamsburg area, before urban decline and the spread of private pools led to its closure in 1984.  While numerous attempts had been made at restoring it to a community recreation center, nothing ever really got off the ground until Clear Channel paid for basic safety renovations in 2005.  Now during the summer, it serves as a venue for both large paid acts, as well as free ‘McCarren Park Pool Parties’ concerts on Sunday afternoons, all right in the middle of the oh-so-hippest part of Brooklyn, just to the east of Sound Fix Records.

Pockmarked and run-down, the cement and brick structure is a long ways from being a pool, but corporate concert promoters Clear Channel were able to make it an enormous venue.  The actual stage is located on one side of the shallow, empty pool, opposite to entrance.  The stage is quite large, and between its own risers and the depth of the pool, looms about eight feet above the crowd.  The gigantic pool has enough space to create festival-size crowds.  There’s usually a photo well in the front, a series of metal barriers with a step up.  Beer other tents dot the sides of the pool.  An enormous semi-circle of Porta-potties lies to the house right, around what was once the separate diving pool (now filled-in, with the concrete remains of the diving board looming over it), with hand-washing stations in the middle.  During the free Pool Parties, there are tents against the hot afternoon sun in the back of the pool, dodge-ball tournaments to the house-right, and volleyball and an inflatable slip-and-slide to the house-left.

The paid acts, usually on taking place on Saturdays, tend towards the largest in the alternative music scene, including Feist, Depeche Mode, and Sonic Youth performing their legendary Daydream Nation in its entirety.  Jelly NYC (managers of events at other Brooklyn locales, including the BAMCafé, Brooklyn Masonic Temple, and Brooklyn Bridge Park) created the free Sunday afternoon Pool Party concert series, and while their acts aren’t necessarily Madison Square Garden-size, they’re at least Webster Hall/Terminal 5-level, such as Blonde Redhead, Band of Horses, and TV On the Radio.  Plus, there are usually three bands in total, with the main openers like The Thermals and Celebration a draw in and of itself, and some up-and-comers leading off, like Illinois, YACHT, and Dan Deacon.  There’s an RSVP option through Going.com, the necessity of which depends upon the weather and size of the act (it was essential for Band of Horses, but inclement rain dampened the would-have-been-huge TV On the Radio turnout); moreover, the events grew more and more popular as the summer went on.  Going into a Pool Party at Brooklyn’s McCarren Park Pool can be a bit of a shock, as it is empty of water, but filled with swimsuits and sun-bathers; free and easy, yet run by professionals; outdoors, but surrounded by thick brick walls; wide open, however filled not with grass and trees but cement and mortar; old and falling apart, yet teeming with the young and pretty.  But a lot of the same things could be said about the Borough of Homes and Churches itself, and one learns that it’s the people who make the place, no cost doesn’t mean lowered expectations, outside is wherever you want it to be, big can rock, and the old can be new again.

The entrance is on Lorimer Street, between Driggs Avenue and Bayard Street 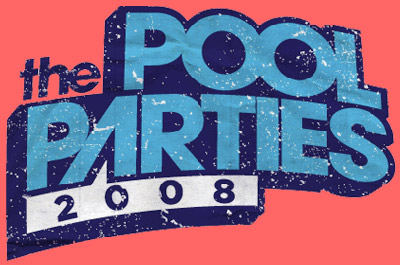