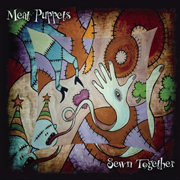 Many cite the reunion of all The Pixies, including Frank Black/Black Francis (QRO album review) and The Breeders’ Kim Deal (QRO live review), at Coachella in 2004 as the beginning of the alt-rock reunion trend that’s brought in everyone from The Police to the upcoming reuniting of guitarist Graham Coxon (QRO photos) with the rest of Blur.  One reunion that flew a little under the radar was the one in 2007 of eighties/nineties grunge-punk icons the Meat Puppets, where bassist Cris Kirkwood finally overcame his drug and legal problems to rejoin singer/guitarist (and brother) Curt (though not original Puppet drummer Derrick Bostrom) for Rise To Your Knees.  Maybe that’s because the Meat Puppets never quite found a category to be iconic in: while they started as one of the classic eighties hardcore punk acts on label SST (along with Black Flag, Hüsker Dü, and Minutemen), by the time of their second record, Meat Puppets II, they’d developed country tendencies which would later be called ‘cowpunk’, but at that time were just considered apostasy.  The band got a second life on a major label thanks to appearing on-stage with Nirvana for their famed MTV Unplugged session (QRO DVD review), wherein “the brothers Meat” accompanied Nirvana on renditions of their own material.  Their most significant success, 1994’s Too High To Die and single “Backwater”, followed, but so did mounting drug abuse problems, especially by Cris, leading the band to break up too soon to really cash-in on the post-Cobain interest.  Curt got a new Meat Puppets behind him for a few years around the turn of the millennium, but it was only when he reunited with his brother (after Cris’ stint in jail for assaulting a security guard – and in the hospital for being shot by said guard) that the Meat Puppets reunion began in earnest.  But the decidedly alt-country leanings of the decidedly older-looking pair on Rise put off older fans and puzzled the younger ones who’d heard that the Meat Puppets were important, only to think that time had passed these brothers by.  So the comfortable progression with their second reunited record, Sewn Together, comes as something of a relief, as the band seems to be finding more of a place for themselves.

Click here for photos of Meat Puppets at CMJ 2007 in New York, NY in the QRO Concert Photo Galleryy

The Meat Puppets take on indie and country is more country-indie than indie-country: the overt tools on tracks such as the titular opener are country twang, but lain underneath is an alt-attitude that makes a compelling piece.  Most alt-country is done by musicians in the way of Wilco (QRO live review): they started in country as a youngster, then heard more alternative fare, and introduced that to their music.  But the Kirkwood boys started in punk, then heard more countrified fare, and introduced that to their music.  It’s akin to the way fellow SST punks-turned-early nineties big-then-broke up-then-back together again-recently Dinosaur Jr. (QRO live review) started in punk and then added guitar power.  Meat Puppets’ alt-punk drive provides a very different basis for the indie-country on pieces like “Blanket of Weeds”, “Rotten Shine” or “Nursery Rhyme”, something that stands above today’s cowpunk or workingman’s punk (like that of Lucero – QRO photos – or Titus Andronicus – QRO photos).

Both genres do lend themselves to going on a bit, and that is a trap the Meat Puppets fall into in their sadder work on Sewn, especially in the back-to-back-to-back “Go To Your Head”, “Clone”, and “Smoke” (“Clone”, in fittingly particular, is quite similar to the preceding “Head”).  And the brothers sometimes indulge too much in their country leanings, like with the backwoods-y “I’m Not You” and definitely the unnecessary high hoedown “The Monkey and the Snake”.  But closer “Love Mountain” is an interesting, slightly ‘tronic alt-country ray of sunshine, after the rain.

In many ways, the real revival of the Meat Puppets didn’t really happen until a festival, last year’s inaugural ATP NY, where they played Meat Puppets II, in its entirety, giving the record its due as the foundation of today’s country-influenced cowpunk.  So Sewn Together sees the brothers on more solid footing than perhaps ever, finally living up to what everyone saw in them, whatever that might be.