Meet Me In the Bathroom

Just around and after the turn of the millennium, New York City hosted a musical explosion that has since become the stuff of legend.... 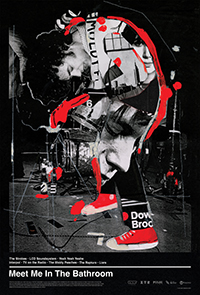 Just around and after the turn of the millennium, New York City hosted a musical explosion that has since become the stuff of legend. The Strokes. Yeah Yeah Yeahs. Interpol. LCD Soundsystem. Bands that conquered the world in a way that feels alien today, something more of the twentieth century music scenes that today’s everything, everywhere, all the time mass social media internet. It was not only era-defining, but perhaps one of the last era-defining musical moments, before every & any moment was captured & dissected live as it happened. Author Lizzy Goodman compiled the stories of the where & when for her book Meet Me In the Bathroom, and now comes to the documentary to match, from Will Lovelace and Dylan Southern.

Like any documentary, any history, any retelling of things that actually happened, Meet Me In the Bathroom does not fit into easy dramatic story arcs, no specific rise-and-fall, lessons learned, etc. Indeed, the early aughts NYC music scene seemed particularly difficult to wrangle, bringing the directors to naturally focus on a few acts, primarily The Strokes, Yeah Yeah Yeahs, Interpol, and LCD Soundsystem, plus some appearances from others like The Rapture, TV On the Radio, Liars, and The Moldy Peaches (the last one as kind of an anti-scene introduction, The Moldy Peaches having been essential in the anti-folk music scene of the time, but not with later success like the others). This leaves tons of other artists on the cutting room floor, but you didn’t come to see a documentary about The Realistics and Oneida (seen only in split-second shots of bygone flyers). It is, like the book, a ‘history of the winners,’ even more so – no quotes from even the likes of Har Mar Superstar; the closest is a random appearance by since-fallen #MeToo subject Ryan Adams, where he tries to say that The Strokes were jealous of him.

Still covering more than one artist, that does mean no definite dénouement, no Sex Pistols-like break-up, no Kurt Cobain-like tragedy (though Courtney Love & MTV make some unwanted appearances…), and the movie can feel a bit disjointed at times. The rise of James Murphy, DFA Records, and LCD Soundsystem in particular feels disconnected from the rest, but that seems to be how their dance-punk scene was back then, happening beside, but not with, the indie-rock of the others. There are references to wider world events, mostly early on, from the nothing-burger that was Y2K to the massive shock that was 9/11, with footage still moving to this day (and the dichotomy between the two exemplifying the shift from the easy-going Clinton nineties to the much more fraught George W. aughts).

What most comes through in Meet Me In the Bathroom is the focus on a few essential people. Strokes frontman Julian Casablancas naturally gets attention, including noting his privileged Swiss boarding school upbringing (bonus points for having footage of interviewer extraordinaire Nardwuar being the one to bring it up), with some deeper dive into band tensions such as the difficulty of following up breakthrough Is This It?. Best is showcasing Yeah Yeah Yeahs frontwoman Karen O’s experience as a woman in a male-dominated scene/industry (the close-up of her singing their seminal “Maps” for the music video is heart-wrenching). And former Interpol bassist Carlos D might be the best representation of that era that there ever was.

Most importantly, the film got some great footage. Any musical documentary rises & falls on its recordings of back when you weren’t there, and Bathroom has videos from what became legendary performances at Mercury Lounge (QRO venue review) and elsewhere, from stage-managed MTV sessions to British tours when they were only big across the pond. In particularly, the footage is not grainy, like so often a twentieth-century musical documentary suffers from (unless you’ve got Peter Jackson & Beatles time & money…), but crisp & clear.

Meet Me In the Bathroom isn’t some neatly-packed revelation of a documentary, no classic three act story of humble beginnings and a big finish. But that’s not how actual life is. Instead, it captures a time & place as best it can (that wasn’t that long ago or far away), through the musical acts you were looking for, that you remember & love.