On her eponymous eighth solo album, Melanie C has levitated from just such a leave-taking dressed in the plumes of a firebird.... 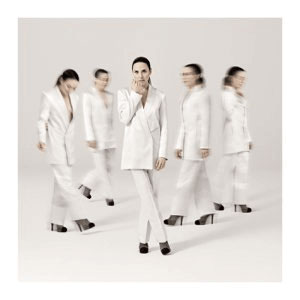 The phrase “girl power” is not, and has never been, a synonym for the syrupy, somewhat braindead wokerati definitions of feminism that dominate much of public discourse on the subject today. It isn’t as small as all that, nor as overtly whinging. Girl power is not up for Instagram interpretation or game to be morphed by anyone’s glorified online mood-of-the-moment. Back in the 1990s, it was a simple, injunctive statement of being, a declaration of a natural fact that should require no syllable of defense or explanation, nor any riverrun prose either. The fact is this: whether buccaneers or birthstrikers, women wield within them the whole shooting match and do not ever require, though may often choose to include, the honorariums of men. When in full possession of this inalienable truth, any wise girl must, at some juncture, heedfully trundle around the arterial Gethsemane gardens within her innermost heart and bid adieu, sometimes even forcefully, to very familiar emotional and mnemonic trinkets if she is to continue as arbitress to the next level of her individual serotonin syndrome. On her eponymous eighth solo album, Melanie C, human alter ego to none other than scorcheress extraordinaire, Sporty Spice, has levitated from just such a leave-taking dressed in the plumes of a firebird. In this case, the ready-for-the-charity-shop items included persistent body hate, patience for unsolicited opinions, and the paucity of confidence that once plagued her reckoning with the sight of her own image strewn across the tabloids of the world. Herein lies girl power poured like Lalique glass. Pour it into your ears immediately. Five minutes ago also works great.

For sheer celebrity breakbulk tonnage, you will likely never see another performing group outclass the fecund launch of The Spice Girls in 1996. Inspiring near-instant, Rajneesh-level devotion on a global scale, they sugar-plummed their way to the biggest-selling debut single of all time and even whomped the unstoppable Oasis at the 1997 Brit Awards. This delightfully offside ousting provided the general public with one of its first and finest chances to buckle onto the crowing confectionary that is Mel C, who pithily used her moment at the award acceptance mic to challenge Liam Gallagher to a fist fight if he found he had the balls to show up and try for it. Just a little mechanical ventilation for some of those who were having trouble breathing in the girl power of it all!

Like neon tetra fish wearing Union-Jack-emblazoned microminis and ravetastic track pants, The Spice Girls were five solar discs schooling the entire audio public on how to grok that pretty + profitable is a Parnassian cocktail more potent than any mixable (or controllable) by people with actual cocks. The kind of social saturation that followed reached towering transverse waves to which few of equivalent international fame can ever lay claim – in large part because few others at that level are working with so. much. girl power. It was a headier time wherein good danger, in every gender and genre, was infinitely more pervasive across all pop formats. When another salvific cultural needle-revver the likes of Eminem – an artist as disparate in style from anything that could ever be classified as sweetie-pie pop as possible – is freely name-dropping your supposedly twee girl group in his introductory, self-hype rap – that’s when you know.

The hortatory and hit-needy flesh trade of the music business proved a callow landscape for a Whiston wildflower like Melanie Chisholm. The industry is exceptionally savage toward pluripotent women who arrive painted with plaudits and campfire, but then refuse to obligingly submit to the kind of character curettage that always comes with that level of artistic recognition. If you are, like our gal Mel C, one of those malapert hussies who comes with your own militia? Yes, you will pay dearly for the impertinence of that insubordination.

After the jarring Jolly Roger of The Spice Girls, she sagely chose to become Comptroller of the Currency in her own rematriation, and a sapphirine solo career has ensued. Testing her potential stag waters in 1998 via a duet with Bryan Adams called “When You’re Gone”, Mel C’s debut album as an independent artist, 1999’s Northern Star, quickly followed. Featuring a priceless collaboration with the indelible Lisa “Left Eye” Lopes, this first showing illustrated early how enmeshed with the feminine predecessors that made her career possible Chisholm has always been. Later, everywhere-all-at-once club bangers like “I Turn To You” and gloriously idiosyncratic full albums of Broadway musical songs like 2012’s Stages showcased Mel C to be the kind of brightsmith that can forge crowns out of any melodic metal of her choice.

Pop music today may be parboiled, truth-shading, and neutered, but Mel C is decidedly, deliciously not from today and thus not beholden to the same confab with laudanum. With this self-titled latest record, she has created a miniature objet d’art partially inspired by time spent last year touring Pride parades with the drag troupe cum club collective Sink The Pink. True to her secondary roots as an accomplished DJ, this record is a ziggurat of deep house and ‘90s disco. Strikingly, there are also flickery phantoms of fellow Northern England force majeures The March Violets and The Comsat Angels in places one would never predict. Her voice is butter and metal, the top end all sidewinding pine. Like pixie corduroy, it dauntlessly offers its ridges and its glitter in equal measure. There’s a roof on it, but Mel C is standing astride, rather than under, its thatched angles, playing surefooted chicken with the gravity between its tonal turrets.

In every regard, Mel C seems to effortlessly evade the ostentatious determinism that can make attempts at aural autonomy by other group-associated performers feel so very one-speed. Like the famously flirtatious cigarette-selling girls at Manhattan’s ageless Stork Club, she still has that wonderfully owlish dance of the eyes, as well as that instinctive veer toward voir dire that so characterized her personality in The Spice Girls. At 46-going-on-16, she is buffer than your 23-year-old yoga teacher by a mile and still in possession of a face that ought to be molded for posterity, à la the example originally set to perfection by Grace Jones. These elements of her physicality are not offered to further objectify her elven élan, but rather to serve as evidential proof of the ichor surely running through her veins, and which very much comes through as the totemic spirit of this latest album.

With a video set in a veritable Museum of Melanie C, featuring statuesque (literally!) vignettes of every corner of her career/aesthetic, lead track “Who I Am” wastes no time announcing itself as a keen kitchen-twirler, making you feel for all the world as though you have serendipitously stumbled into one of those infamous London dance clubs of the alternative ‘90s in which Underworld has just left the stage and Blur is up next. “They don’t recognize when I’m being honest / Cause I wasn’t before,” croons Countess C, and an anthem of self-discovery worthy of the album’s running theme is born. “Blame it on Me” grasps that same message-baton and races away with it to a white dazzle of beats turning in chevrons and spirals around telling lyrics such as, “Now it is so clear to see / Your dark and twisted fantasies / Only like me when I weep / Trying to be my remedy.”

Read from top to bottom, even the trajectory of the song titles tells a worthwhile story, and it is a universal lullaby about liberation, authentic self-presentation, and queenhell. For all Mel C’s well-known appreciation and interior connection to the color red – extending through her founding of Red Girl Records and naming her daughter Scarlet – this album carries a distinctly ultramarine tint right the way through, and it exfiltrates itself in a wide spectrum of intriguing manifestations over the course of this group of songs. There are the Aegean rain droplet beats of “Overload” and its immediate shark imagery. There are the rippling synth tides of “Here I Am” with its inaugural lyric, “Head under water.” There is the sonic certitude that “End of Everything” sounds precisely like a paradisal pond spilling over with blue lotus.

Even if you don’t have a bead of water in your astrological chart and all these Piscean parallels and Aquarian antecedents don’t speak to you at all, this record can still be the flowering marjoram bush outside your window as it sports all of the earthy, conical fire now synonymous with its creatress. Ever the stereotactic Scouser, she enlists Nadia Rose, gobby gamine supreme of the galloping U.K. grime scene for “Fearless”, which functions as a kind of pulse oximetry test for your best self-talk. “Nowhere to Run” is a sigh in a candlelit castle that may or may not have man-eating manticores lurking, and the twin monsters of fame and love are fairly depicted as the bi-headed beasts they are. This is a song about the moats necessary for survival when you’re seasick-drunk off of other people’s shortcomings (or your own), and one written shortly after Mel C’s lifelong battle with anxiety produced its first public panic attack. Standout track “In and Out of Love” sings of those fickle infatuations so native to youth and dancefloors, and is set to a sexy little underbeat Quincy Jones would openly groove to – a naughty nod to the quest of getting higher, and sticky as succotash made with muskmelon.

Anytime a piece of art is about to make a micromatrix of the world, it is nearly always dismissed as a time-sensitive novelty. That goes for everything from impressionistic paintings to The Beatles. What gets lost in the great fuss that usually ensues within all critical circles but can easily be seen from astern once that permanent mark is officially made (and the fallacy in said art’s novelty-status thereby formally debunked) is the pungency in the parts of it that truly are frozen forever in their time – and what a good thing that is, and what that might then mean for the art becoming a powerful cultural artifact on a more poignantly historical level. Being something quirky, distinctive, and even anachronistic then starts to be the portal through which you let yourself be everything else.

With this self-titled release, Mel C demonstrates how masterfully she has gone from a dagger dancer to a dove merchant over the course of her career despite all standing odds, and that emphatically embracing the moment you are deemed “of” allows you full access to all other moments that come after. There can be zero debate that The Spice Girls impeccably encapsulate not just England in the 90s, but the actively shifting attitudes regarding what pop music could mean, the evolving beliefs about the ways that women could present themselves onstage or off, and the sort of seed sovereignty over their own identities that female artists could come to expect. Butterflying out of that type of rarefied titanolatry has its own violent kind of oppo. However, as cherished American photographer Rodney Smith piquantly noted, “what is truly magical stands outside the bounds of time.” Much like girl power. Much like Mel C’s badassery, biceps, and most recently proffered bars of burlando beauty.