Melvins – Live at House of Vans

House of Vans got some of the better louder to close out July with Melvins, Baroness, and Honky.... 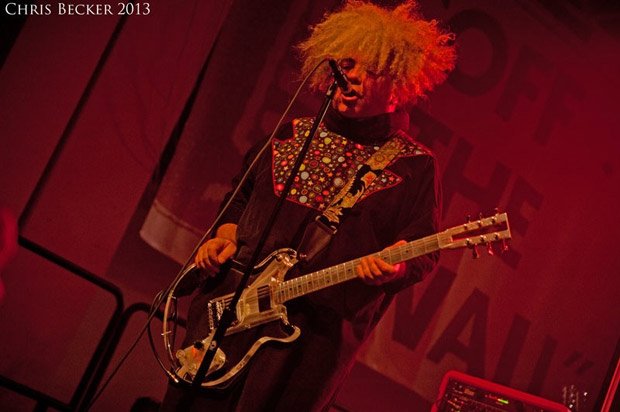 As befitting a space set up by a skate shoe company (a space that includes a skate park, even if you can’t bring a skateboard in there anymore, thanks to some young fan hitting someone else with his board in the first year there), House of Vans in Brooklyn naturally tends towards the harder rock each summer.  There are some chill shows there (see chillwave OG Toro y Moi’s set – QRO photos), but mostly it’s the louder fare.  Even the dance shows like !!! (QRO review) Louden Up (Now).  But Vans got some of the better louder to close out July on Wednesday the 31st, with Melvins, Baroness, and Honky. 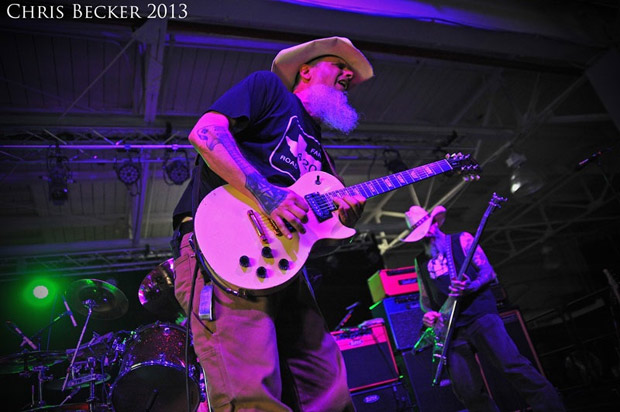 Admittedly, the evening didn’t start off stellar with Honky – though it did start early, with the band’s set beginning at 7:30 PM, not eight o’clock as is usual at the space.  The band was the kind of less-than-enjoyable punk-hard that turns people off of louder music.  Now, there were a good number of people there for the hard-rock from the get-go, but also likely a lot who’d showed up as early as possible to get as much free beer down their throats as possible, and the latter probably headed straight to the beer area in the back (which was separated from the main stage area by a big 21+ double-divider after that same incident in the first year of House of Vans – QRO venue review), and stayed there.  Even the folks handling the VIP list made sure to close the door from the main stage area into VIP to muffle the sound (but, then again, they seemed to do that for every act). 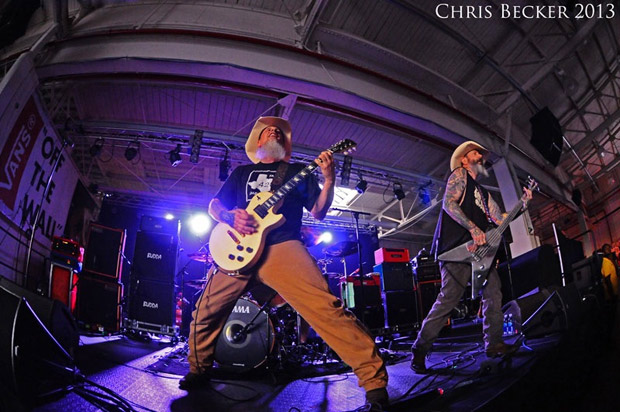 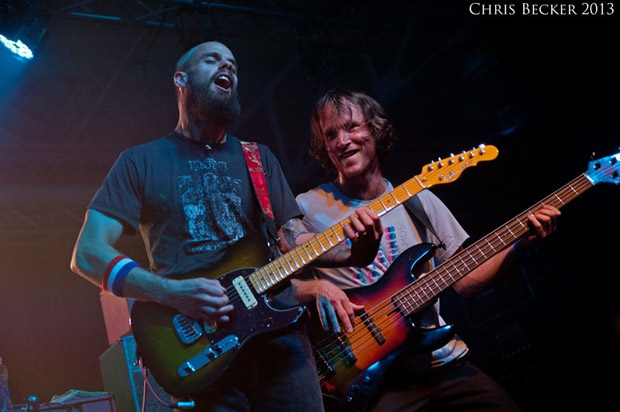 Click here for QRO’s review of Baroness at The Deluxe at Old National Centre in Indianapolis, IN on June 11th, 2013

But if you want your higher grade of metal, a great place to get it is Baroness.  Metal music has been enjoying something of a critical renaissance in recent years, being re-appreciated by hipsters and developing a whole new crop of high-quality acts (the Grammys are still stuck in the nineties, even the eighties, but that’s the Grammys for ya…).  And Baroness gets particularly warm feelings from across the music community, as, right after the release of their well-praised Yellow & Green (QRO review), the band suffered a terrible bus accident last year, preventing them from playing House of Vans that summer.  But the band is now back (though not with the quite injured bassist Matt Maggioni and drummer Allen Blickle), and has seemed calmer than in years prior, just appreciating what they’re once again able to do.  And there was a big crowd for the group, not surprising given their heightened acclaim, and that this was their first show in NYC since that accident.  Still being slotted as opener, the set wasn’t as long as Baroness fans might have hoped, but they’re back in five boroughs just two weeks later, this time headlining, at Irving Plaza (QRO venue review) on August 14th. 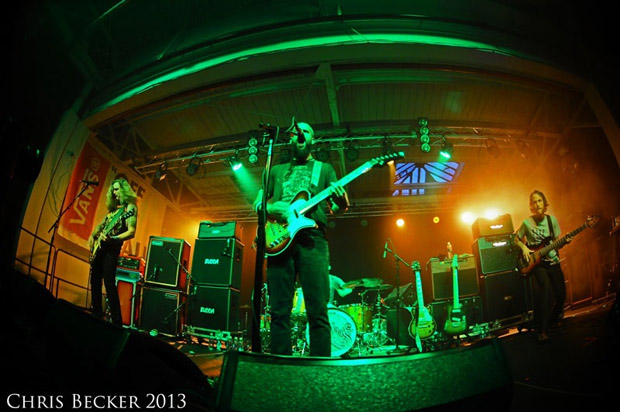 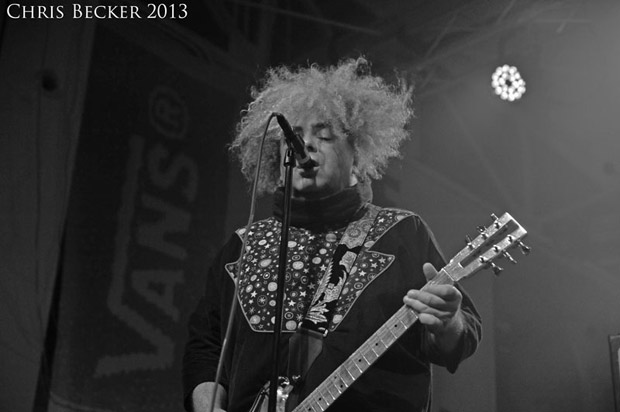 Click here for QRO’s review of Melvins at The Vogue in Indianapolis, IN on September 22nd, 2012

This all threatened to take away some of the thunder from House of Vans headliner the Melvins, but the Melvins know how to bring the thunder.  The band has been going strong now for thirty years, from early hardcore days in the eighties to a slower rhythm that helped inspire grunge in the nineties (they do hail from Washington State…), and while their commercial success was probably highest when lifted by the popularity of grunge back then (and a stint on a major label), they’ve never stopped touring or putting out new material, most recently with this year’s covers album, Everybody Loves Sausages.  The band played material old and new, and had fans old and new as well, from kids there at the all-ages space to a set of parents who brought their toddler with them in a backpack-like carrying device (thankfully had the kid in big noise-cancelling headphones…).  And for the last song of the night, Gibby Haynes of fellow loud veterans Butthole Surfers joined the group on vocals. 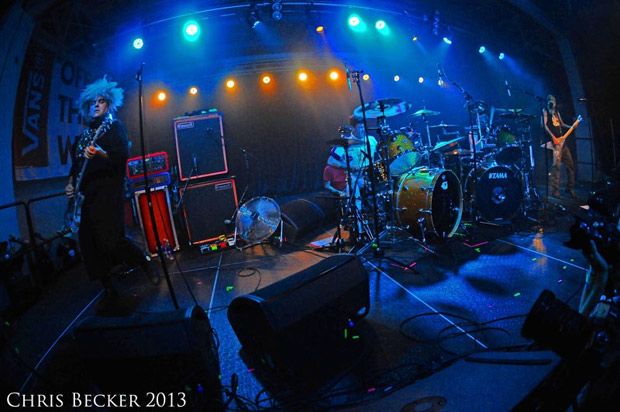 House of Vans has two more shows this summer (QRO NYC Show Preview), Kid Dynamite playing one of their last U.S. shows ever before wrapping it up as a band on August 15th, and then Les Savy Fav closing the space out near the close of August on the 29th (and like basically every night at House of Vans, LSF singer Tim Harrington was there on July 31st – this time wearing a kick-ass bright orange pants and blue & orange backpack).  So the knob will stay at eleven for one more month. 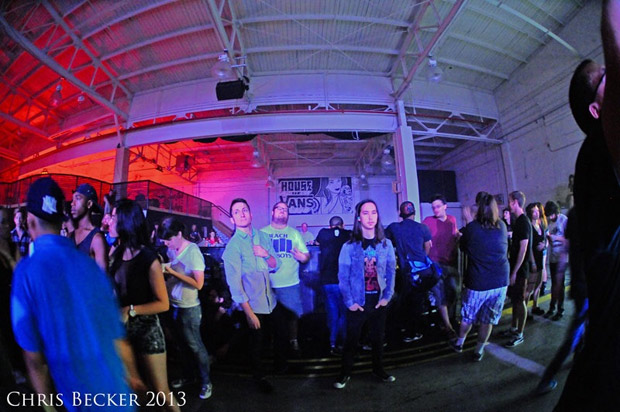