<img src="http://www.qromag.com/wp-content/uploads/2011/02/meridenesomethinglikeblood.jpg" alt="Meridene : Something Like Blood" />Meridene is one of those bands that isn't trying to make anything new, preferring good, clean fun over experimental soundscapes. ... 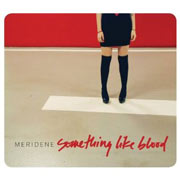 Meridene is one of those bands that isn’t trying to make anything new, preferring good, clean fun over experimental soundscapes.  The problem here, though, is bands like this have a tendency to be difficult to review.  Are they better off being left unnoticed because of this approach?  It’s hard to say.  While offering nothing listeners haven’t already heard before, Meridene’s latest still manages to polish the group’s sound well enough that it makes for at least a somewhat decent listen.

Something Like Blood starts off strong with its heavy use of simple yet effective hooks.  These pieces of ear candy make some of the less-than-spectacular tracks worth sitting through to hear their sweeter and more memorable sections, such as the lead-in yell of the breakdown at the end of "Parade of Fools" or the guitar outro of the title track’s final two minutes.

Unfortunately, the early strength that had the potential to carry the album to greater heights dwindles toward the end.  In the last fifteen minutes, the band ditches its early energy in favor of a softer, mellower sound that feels cliché and leaves the listener questioning why they’re still listening to this when they could just skip back to the very beginning.  Even the closing track "A Man of Faith, A Man of Fact" takes the placid route and ultimately forfeits the solid ending the album needed.

Considering Meridene got their start in the Bon Iver (QRO album review)-hometown of Eau Claire, Wisconsin, it would at least be fair to give them credit for going down a path less traveled in a town littered with a sudden overabundance of folk.  However, that path doesn’t divert far enough from the norm, leading to more of a "been there, done that" rock record instead of something unique enough to take notice of.

That said, Something Like Blood is a must for diehard Chutes Too Narrow-era Shins (QRO live review) fans that are looking to get their upbeat indie rock fix while waiting for James Mercer to quit dilly-dallying with side projects (QRO album review) and get to work on what everyone is actually looking forward to.  Otherwise, Meridene’s newest release certainly isn’t bad, but it’s not exactly essential either.