When a musical act has been around long enough, gotten enough success that they can be around ‘long enough,’ they will have established their signature sound.... 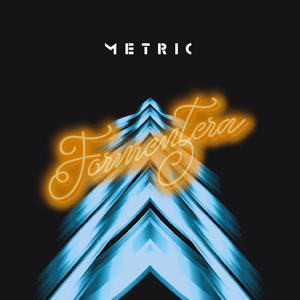 When a musical act has been around long enough, gotten enough success that they can be around ‘long enough,’ they will have established their signature sound, even if they’re alt-acts who would probably not like it to be said that they have a single ‘sound.’ Toronto’s Metric have certainly found success & longevity, one of the most successful of the ‘Canadian Invasion’ of the aughts, their electro-rock both alt- enough to be their own, but also appealing enough for wider reach. If latest Formentera doesn’t exceed what they can do, they still do it very well.

Admittedly, Metric do reach for more, at least in terms of length, with the ten-plus-minute Formentera opener, “Doomscroller”. But it showcases what they do so well, going from dark & subtle into something bigger, then something smaller (and isn’t just an indulgently extended version of one thing). From there, the group has their nice mix of both sad and hope, dance and meaning, singer Emily Haines an electric frontwoman and a compelling connector on pieces such as the sadly anthemistic “All Comes Crashing”, dark/dance “False Dichotomy”, and more.

If Formentera is very much a Metric record, it is a band doing what they do well, so well – again.