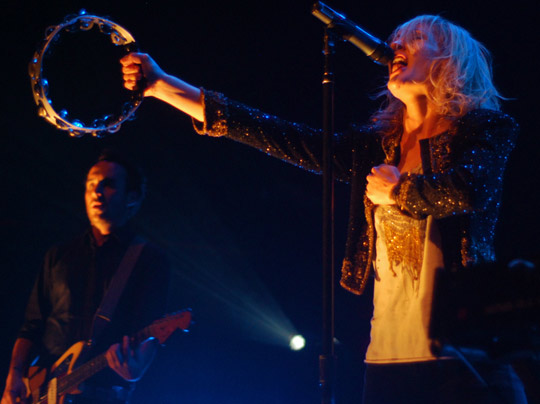 Is it wrong to begrudge a band for finally getting breakthrough success?  That’s a question that bedevils the alternative music world: alternative music is supposed to not have broken through to the mainstream, but you’re also always complaining that what’s in the mainstream sucks; the smaller the setting, the more special it is to see the band, but you also don’t want them to have to forever toil away in obscurity; ‘you listened to/saw them when’ is the utter claim of indie-cred, but it’s also the utter definition of hipster smugness.  However, when a band so clearly wants that success, so clearly revels in it, and is just so good at it, one can’t help but think this is where they should be right now, such as Metric playing New York’s massive Terminal 5 on Wednesday, June 17th.

With the Toronto four-piece’s newest record, Fantasies (QRO review), they were definitely reaching for even bigger acclaim and audiences, nowhere more so than with the bombastic “Stadium Love”.  The epic piece is truly anthemistic in the love of playing to huge audiences, and the love they give back to the band – at Terminal 5, singer/keyboardist & frontwoman Emily Haines called it “the new anthem”, encouraging fists in the air and even doing the quintessential hands out, ‘gimme more applause’, motion. 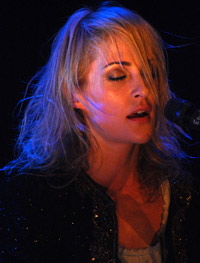 Emily Haines: she’s a great singer and an accomplished songwriter on her own (see her solo work – QRO review), but she also easily fits into the rock ‘n’ roll diva-goddess role, thanks to her gorgeous looks (is there a better-looking woman in indie-rock?…) and seemingly boundless energy.  During the quiet-to-loud “Empty” (another song that saw her physically 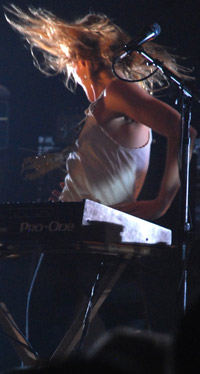 entreat cheers), Haines twisted like crazy, and during virtually the whole set she was pumping her legs and running around (when not tied to the keyboard or guitar – and sometimes even then).  Upon seeing that ‘blonde rocking’, does it bring to mind Kim Gordon 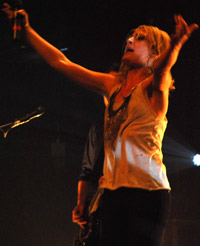 of alt-icons Sonic Youth (QRO live review), or Madonna?  If the former, you might think Haines has gotten too big and in love with her fame, but if the latter, you might think she’s perfectly combined alt- with mainstream success.  But Gordon was 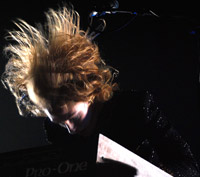 just drawing from Deborah Harry (of New Wave icon Blondie, if you have to be told), who was a mainstream success in her own right – and Haines, wearing leggings and a tank-top (not last year’s shiny bodysuits – QRO photos), was more like a modern, alt-rock version of “Let’s Get Physical”-era Olivia Newton John.  And while it might be tough to match Gordon (no knock on Haines – who could?), Haines beats the (tight) paints off of mainstream acts from Madonna to Newton John.

There were still problems with Metric at Terminal 5, but they were mostly relating to the venue itself (QRO review).  Haines impressively is even more popular among young girls than in any sector of the XY crowd, but at the all-ages Terminal 5, you get quite a crowd of just-over-tweener girls, making for a packed house of young girls – plus some kinda skeevy, bridge-and-tunnel type, greasy hair dudes –

who are over-excited, entitled, and know little about ‘show etiquette’ (like thinking they can just move as close to the front as they want to, bring their over-tall boyfriends in tow and block the view, or even actually thrusting their arms up in the air to give a physical thumbs down to the opener, and good friend of Metric, Sebastien Grainger – QRO photos – during his set).  Terminal 5’s massive size (and all-ages crowd) also over-amplifies the focus on Haines, over guitarist/songwriter James Shaw (who started the show by rocking the metronome, but despite that & being the only one lit up at that moment, all the cameras in the photo pit were focused on Haines) and especially bassist Josh Winstead, who couldn’t quite get enough attention to fulfill his usually well-done role as lead energy man (and forget about seeing any of drummer Joules Scott-Key – but that’s always the lot of drummers…). 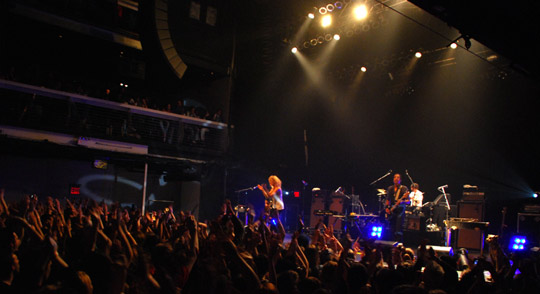 Fantasies naturally dominated Metric’s set, at almost two-thirds of the tracks, though weighted towards the front of the set list, at six of the first seven songs, starting with opener “Twilight Galaxy” & single “Help I’m Alive”.  But the show really hit its highest stride with the one non-Fantasies piece in the early goings, “Handshakes” (from 2005’s last record, Live It Out), always a great one live, and it was matched by the following Fantasies-ers “Gold Gun Girls”, “Gimme Sympathy”, and “Sick Muse”.  From there, Metric most fully embraced their massive crowd, starting with “Empty” and going through to “Stadium Love” – Fantasies’ “Front Row” was a little too grinding, but “Dead Disco” (off of 2003’s Old World Underground, Where Are You Now? – the only non-Fantasies/Live It Out piece of the night) kept up it’s place as quite possibly their best live song.  “Stadium Love” led into the encore break, and Metric returned for two Live It Out live staples, “Monster Hospital” and the title track. 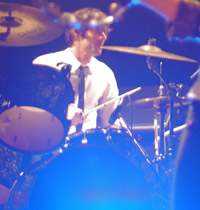 Haines gave “Monster” opening “Bam-chicka-bam chicka-boom-boom-boom chi-wa-chu-wa-boom chi-wa-chu-wa-boom” [note: as close to verbatim as possible] as much energy as she ever does, and she & Shaw ended the set with their slow, “hippie” version of “Live It Out”, where Winstead & Scott-Key slowly reenter for the now-torch song rendition. 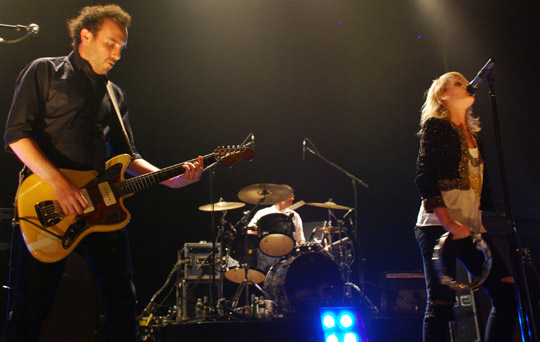 That ending has become something of a staple of Metric though this time they were playing to a crowd large enough for them to ask for lighters in the air (or, more frequently, “lighters by Nokia”).  And it doesn’t take Terminal 5 for Metric to have a somewhat douche-y crowd (QRO previous live review).  Also, Metric originally formed in New York, making them particularly amped about playing such a large place 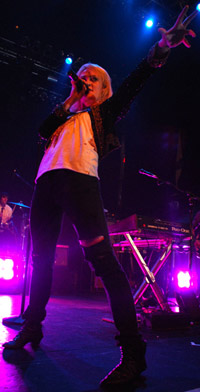 (even reminiscing about their early days in the Big Apple, including “taking the subway to play for The Rolling Stones”, lamenting the late nightlife hotspot Fez).  Are you being a ‘hater’ if you say, “I liked Metric better when they played smaller places” – especially when that ‘smaller’ place was some place like Webster Hall (QRO live review there), a large venue in its own right (QRO review)?  Is it wrong to wish your beloved indie-rockers hadn’t hit it so big?  With a band that as clearly loves their success as Metric, and so good at it, just be happy for them and enjoy the show. 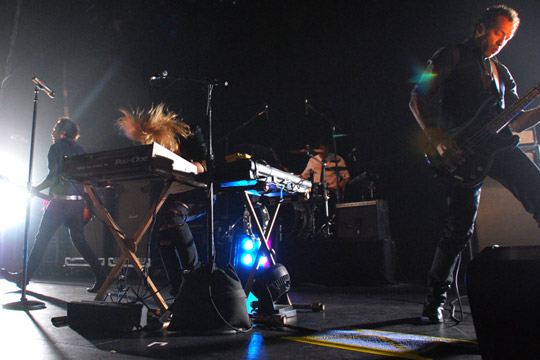