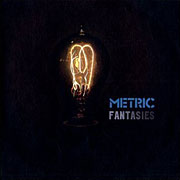 For a band with the soaring power-pop ability that Metric has, they seem to recklessly drift in and out of the spotlight.  It’s been four years since their last album, Live It Out, and since then, side projects formed and singer Emily Haines escaped to a different continent for a while.  Perhaps that’s what gives their newest album, Fantasies such vigor as well as enigmatic charm.

Fantasies is forty-two-plus minutes of fierce, driven pop-rock with the band’s sharpest edge yet.  Present on the album are Haines’ requisite, sharp-toothed vocals, which aim at unnamed, decadent individuals (“Gold Guns Girls”), her forced circumstances (“Blindness”), and uninspired romance (“Collect Call”).  Haines nails all of her targets, and with her usual, wonderfully clinched delivery. Some of Metric’s finest melodies appear on Fantasies, like the galloping sing-a-long “Gimme Sympathy” that features several fetching references to the two biggest bands in history.  The high-end strain on Haines’ vocals beautifully traverses the jagged riff on “Sick Muse” and “Blindness” is the band at it’s anthemic finest.

As the reluctant superstar, Haines has the role down pat.  Leading a band that can fill stadiums around the world, but with the aura of a near-recluse, she gives Metric a mix of glamour and fear that is truly unique.   Fantasies is another genuinely solid example of it.