<img src="https://www.qromag.com/wp-content/uploads/2011/10/metricfantasiesflashbacks.jpg" alt="Metric : Fantasies Flashbacks" /><br /> Metric is a band that lends themselves well to remixes. ... 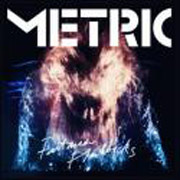 The last two years have been good times for the Canadian based indie rock band Metric.  The band had spent most of the decade working their way up passed the parapet of the underground with acclaimed, yet low-charting releases such as 2001’s Grow up and Blow Away EP, followed by their first full length, 2003’s Old World Underground Where Are You Now.  That all changed come 2009 with the release of Fantasies (QRO review), an album with the band’s former indie/post-punk aggression cut with a heavy drum emphasis and danceable melodies.  Fantasies charted higher than any other of the band’s former releases, earning a #1 slot on U.S. Billboard Top Heatseekers and #6 on Top Independent Albums.  Since the album’s release and take off, Metric has launched an year-long appreciation campaign for their fans, all culminating in the release of Fantasies Flashbacks, a collection ten 7″ vinyl singles featuring fan made remixes of Fantasies tracks along with the original versions, bonus remixes, and fan site exclusives, adding up to a 33-track release.

Metric is a band that lends themselves well to remixes.  The tracks on Fantasies have a sort of rave/trance feeling to them, with deep echo and re-verb effects used on both lead singer Emily Haynes’ vocals and percussionist Joules Scott-Key Kit lending to a sort of out of body feeling while Josh Winstead’s and James Shaw’s stiff and straight bass and guitar lend well to a simple and hooky dance equation.  So the remixes on Fantasies Flashbacks have an extremely good set of material to start with as a base.

The remixes are mostly new millennium techno with shots of ambient trance, mainly utilizing Haynes’ modulated voice as a melodic hook.  Some of the stand outs on the album do break away from this equation and step into dirty, club grinding numbers (i.e. TrashTalk’s sexed up take on “Gimme Sympathy”), while others take out some of the inherent dance features of the originals to give a new, more intimate feeling to the songs (i.e. Maur Due & Lichter’s take on “Sick Muse”).

The release is not without its weaknesses.  The digital release track listing, for example, places the original tracks interlaced with the remixes, so anyone who owns the original Fantasies album will have to do some organizing to separate the redundancies.  This also causes a sort of break in the trance like set up of the remixes, which is a cardinal sin when composing a dance album.  Also the album is a little too full, with an extra 14 bonus tracks on top of the original tracks and featured re-mixes, leaving fans to siphon through and pick their favorites from the litter.

Metric seems to have released Fantasies Flashbacks for two reasons.  The first was to further bridge the ever-shirking gap between indie rock and techno, using the success of Fantasies as a launching point, and the second is to give fans of the album as much of a full spectrum look at the potential of the tracks as humanly possible (also, all the proceeds from the limited-edition deluxe vinyl set will go to the Center for Addiction and Mental Health).  In this way, Metric has succeeded in celebrating and utilizing their success.  Despite the girth of the album and the inherit weaknesses of it being a re-release, Fantasies Flashbacks is a good buy for any hardcore Metric fans and anyone looking to expand their dance music collection.