Right before rocking Jersey, Metric hit up a late night set in Manhattan.The Toronto/New York-based band were going to be playing the new All Points West Festival (QRO Festival Guide) across the Hudson at Liberty State Park in New Jersey on Saturday, August 9th, but they still managed to fit in a show at Highline Ballroom the night before – or rather, the morning of, since the doors opened at midnight and Metric went on a little after one A.M.  But the place was packed (albeit not with the most enjoyable of crowds), and everyone there got to see the band up close and personal.

Fronted by the impossibly beautiful Emily Haines on vocals and synth, Metric opened with a bang, thanks to “Dead Disco”.  That excellent piece from 2003’s Old World Underground, Where Are You Now? is a natural live favorite, and was only made more so in the posh Highline Ballroom (QRO venue review), with its great lighting and yes, a disco ball.  Following that up with its preceding track on Old World, the more subdued “The List”, was a bit of a strange choice, yet “The List” was still taken up a notch, live.  And it didn’t matter if you were XX or XY; one couldn’t help but go nuts to Haines’ own ‘girl power’ anthem, “Poster of a Girl” (from their last record, 2005’s Live It Out).  The new “Satellite” featured a heavier bass from bassist Josh Winstead, with the driving piece playing darker.  That drive pressed forward into an explosion as Metric returned to Live It Out with “Handshakes”.

Maybe because it’s been so long since their last new record, but Metric is a band that has their live show down pat.  A lot of the focus rightfully goes to Haines, and she earned it with her wild twists on Live’s “Empty”, wherein she also got the crowd to sing along.  But don’t over look Winstead, who seems to spend every moment he’s not picking bass cheering the crowd on, even doing the ‘I can’t hear you’ move to his ear during sing-alongs.  Winstead was especially effective on the tech-slide “Rock Me Now” (the only track that night from their would-have-been-2001

debut, Grow Up and Blow Away, which finally saw its release only last year).  In between those two crowd participation numbers was Old World’s sadder, but still electric, “Hustle Rose”, and Metric went into the encore break in the Old World with the graceful “Calculation Theme”, and the anthemistic “Combat Baby” brought the house down.

Of course, Metric returned to the cheering crowd, with the night’s other new piece (and an easy live favorite), “Stadium Love”, big and rocking, with “whoo-hoos!”.  While Metric have a lot of crowd favorites, is there any bigger than “Monster Hospital”?  From the first “bam-chicka-bam”, from the moment Haines leaned over, mike lost in her hair, the place went nuts. 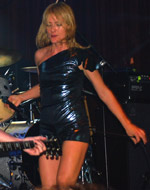 For their conclusion, the band tilted things a bit as Winstead and drummer Joules Scott-Key left the stage.  Haines first told the crowd about how, since the band moved from New York, back to Toronto, right around Election Day, 2004, “I think I’ve turned into a bit of a hippie…”  Yet Haines was proud of that, saying couldn’t we be hippies who “just wear better clothes?” (Haines herself was wearing some sort of silver, reflective, pseudo-seventies jumpsuit-meets-short-shorts), and told how happy she was that acid was making a comeback over crystal meth.  She and guitarist James Shaw then delivered a slow, almost acoustic version of Live It Out’s title track, which Haines called, “The proof of my increasing hippie-dom – and my effect on my rockin’ brothers in Metric…”  The whole thing was a massive sing-along from the get-go, with Winstead and Scott-Key returning to the stage to encourage the crowd on – not that there was any need…

The only real downside to the set was the crowd.  While there were certainly a large number of fervent Metric fans (both female and male), there was also a large contingent of rather entitled drunks.  Many were probably in town for All Points West, maybe back from the first night of Radiohead, and when they saw this show listed so late (probably so it wouldn’t conflict with APW), they figured they’d head on down.  That left a massive line outside of people without tickets, most of whom would first walk up to the front door and just assume they could get in, and have to have security point them to the line they’d ignored.  What’s more, the late hour meant that the crowd was drunker than usual, more full of themselves – one dopey-looking guy with a backpack climbed on stage early on (with Shaw pushing him off between guitar licks), while many attempted to squeeze their way forward, past others, then just stop in some place that wasn’t a place to stand (the worst was tall guys who were pushing forward with their pushy little girlfriends – stopping where she could see meant that he would stop in front of many not as tall as him…).

But those were minor quibbles – and everyone there certainly had a better view than anyone at All Points West (where Metric delivered the exact same set, including hippie speech – though Haines (in a gold version of the same outfit) admitted there that anyone who’d been at Highline would have already heard this).  We’re all still waiting for Metric’s new album (Grow Up and Haines’ solo outputs, Knives Don’t Have Your Back and What Is Free To a Good Home? EP (QRO review), don’t really count), which hopefully comes out later this year – but nothing’s quite like Metric live…