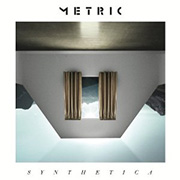 Click here for photos of Metric at 2012 Sasquatch! Festival in George, WA

Click here for photos of Emily Haines & Sebastian Shaw at Juicy Couture for Fashion Night Out in New York, NY on September 10th, 2010

Click here for photos of Metric at 2010 Osheaga Music Festival

Click here for photos of Metric at SXSW 2010 in Austin, TX

Click here for photos of Metric at All Points West 2008 in Liberty State Park, NJ

Metric aren’t approaching stardom – they’re there.  The Toronto-based indie-rock four-piece broke through as part of the ‘Canadian Invasion’ in 2004, alongside such acts as Broken Social Scene (QRO spotlight on – with Metric singer Emily Haines getting additional exposure as BSS’ guest female vocalist around that time – QRO photos of Haines with BSS).  But after 2005’s Live It Out, the group disappeared for a while, with Haines even releasing solo material (QRO review) – yet they returned in force with 2009’s Fantasies (QRO review), a record that launched them into true “Stadium Love”.  Since then, the group has remained in the stratosphere, from Twilight soundtracks singles (QRO album review) to Haines joining the latest breed of high-profile alt-singer/songstresses/feminine icons.  And with Synthetica, Metric embrace all that they’ve become, even as they start to shake out of their skin to become something more.

Synthetica‘s release was preceded by that of single “Youth Without Youth” (QRO review), a pumping Metric that delivered the indie-rock electro-dance you were looking for – but the record as a whole is more than just that.  It opens with an actual slight synthetic haunt in “Artificial Nocturne”, just before “Youth”.  “Speed the Collapse” is expanding, meaningful, and has a hook beat.  Haines sings in praise of the power of song on “Dreams So Real”, while the following catchy ditty “Lost Kitten” still has her underlying subversive nature.  Penultimate “The Wanderlust” adds some spoken back tracks from none other than Lou Reed to the electro-up piece – and Lulu (QRO review) this is not…

Metric’s impressive success since Fantasies has meant a less agitated feel to Synthetica, and more of their straight-up empowerment.  But there is nothing artificial about the triumph of Metric.