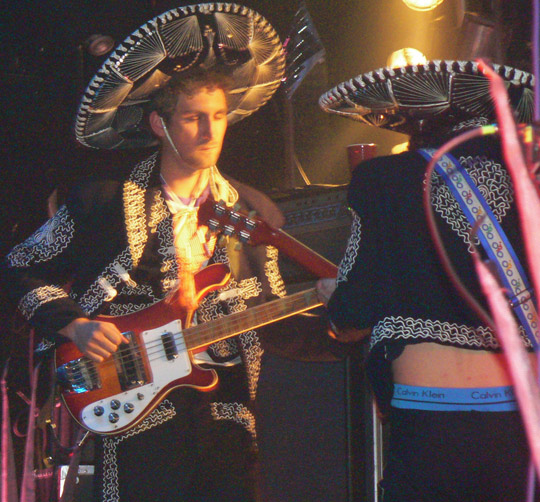 MGMT got Halloween started early with a wild show by the wild bandeleros.  Playing the first night of a two-night Halloween event, the Brooklyn band hit Manhattan’s Webster Hall (QRO venue review) on October 30th dressed up like the Three (plus) Amigos, in full mariachi outfits.  MGMT has grown since their days as a duo, up both from just Ben Goldwesser & Andrew Van Wyngarden to five or six members by now (not counting the soundman, who was wearing a Mexican wrestler mask – QRO photo), and in popularity, after last year’s breakout Oracular Spectacular – they were even on Sundance Channel’s Live from Abbey Road (the repeat of which was on TV the very same night – QRO Indie on Late Night TV).  But they were always a grand-sounding band, more akin to seventies stadium guitar-rock than today’s intimate indie, so they could fill the Hall.

Click here for photos of MGMT at McCarren Park Pool on July 28th, 2008 in the QRO Concert Photo Gallery

Sticking almost entirely to Oracular, MGMT opened with the record’s weird twinkle-synth “4th Dimensional Transition”, introducing their psychedelic edge from the beginning.  But then came the other side of the sixties & seventies with “Pieces of What”, whose straight-up rock reached the rafters in its uplift.  MGMT are a surprisingly spirit-raising band, whether rocking like on “Pieces” or going high psychedelica on the night’s following “Of Moons, Birds & Monsters”, or both with “Weekend Wars”.

That combo led into MGMT’s breakthrough single, “Time to Pretend”.  Its grand expression of uplift and bright seventies still brings one up to this very day (though its second line, “Let’s make some music / Make some money / Find some models for wives”, is a little ironic now, given rumors that someone in the band is dating Spiderman’s Kirsten Dunst…).  But after their most recognizable song, the band hit up two non-Oracular numbers.  First came a cover of Jesus & Mary Chain’s “Teenage Lust”; not surprisingly (but still good), it played less like the eighties New Wave of the original and more like the rock of the decade before.  Then came MGMT’s recent non-album single, “Metanoia”, a grand seventies psych-guitar odyssey.

MGMT returned to the Spectacular with their second single, “Electric Feel”.  The totally catchy sexy-synth seduction was all that and a bag of chips.  The band slipped back into psychedelica with “The Handshake”, before regaining the synths – though with a little more soul – on latest single, “Kids”.  But they still had one more surprise up their sequined sleeves, in an absolutely awesome cover of Cyndi Lauper’s classic “Girls Just Wanna Have Fun”, to go into encore break (first Princeton does a great cover of “Girls” during CMJ – QRO CMJ Day One recap – and now MGMT?  Let’s hope Lauper’s having some extra fun…).  And the young-in’s stayed in the picture on the encore return, with the finish of the band’s ‘young people triptych’, in the super-high psychedelic atmosphere, “The Youth”.

Tonight, MGMT crosses back over the East River to play another Halloween show (QRO Concert Calendar listing), this time at Music Hall in Williamsburg (QRO venue review).  Maybe the crowd will be a little less ‘frat boys and their girlfriends – with all the girls dressed as ‘sexy devils’ with little red horns…’ (and hopefully there won’t be that annoying fan that brought his own tambourine – and insisted on shaking it non-stop, from the moment he got there).  And the slew of openers (Amazing Baby, Violens – QRO photos, Francis & The Lights, and Boy Crisis) will certainly be stronger than the boring, ‘supposedly legendary’ Suicide (QRO photos).  But wherever they rock, whenever they rock, MGMT will deliver on their promises.