<img src="http://www.qromag.com/wp-content/uploads/2010/04/mgmtcongratulations.jpg" alt=" " />MGMT's second album may be the classic sophomore slump, but it's only one mediocre issue from a band that will live to fight another... 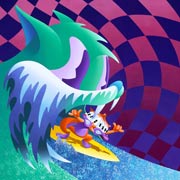 From the penthouse to the doghouse in one record?  Don’t believe the hype.  MGMT’s second album may be the classic sophomore slump, but it’s only one mediocre issue from a band that will live to fight another day.  In case we’ve forgotten, let’s recall why expectations were so high for Congratulations: The Brooklyn-based band’s debut Oracular Spectacular was an absolute grand slam with nary a weak track, plus a few immortals like “Time to Pretend” and “Kids”.  The masterminds behind MGMT’s sound, Ben Goldwasser and Andrew VanWyngarden, mixed rock rhythms, dance beats, and electronic textures into a psychedelic stew that spawned a thousand imitators.  Sure, there was some grousing about weak live shows (QRO live review) and an affected image, but quality talks and bullshit walks.  If you didn’t attend at least one late night dance-party involving “Electric Feel” in 2008, then you’re probably a gun-toting philistine who should be put out of your misery.

Enter: Congratulations.  After big tours, big festivals, and a beef with the president of France, MGMT looked poised to reenter the studio to cement their accession into the ranks of the Untouchables.  Then something funny happened: the tide started to turn.  Fan-boys and blogheads got their first taste of the new album in the puzzling nugget “Flash Delirium”, which MGMT rather lamely introduced with the caveat that it wasn’t a single.  Rather a ‘taster’ from an album that was, in their own words, “…a collection of nine individual musical tours de force sequenced to flow with sonic and thematic coherence.”  It was around this time that the boo-birds began to make their voices heard, led by the silent majority that had always found MGMT affected.  Fairly or not, “Flash Delirium” has come to stand for everything that is right and wrong about Congratulations.  It’s the acid test of the album.  If you can walk away from that ‘taster’ with pleasant memories, MGMT will stay on your all-star list.  If not, well then, you might bump them down a few notches.

Since everything about MGMT has been analyzed, QRO will do the only thing left: over-analyze.  Here’s our second-by-second breakdown of all that’s good and bad about the pivotal “Flash Delirium”:

The track opens with a spunky little drum beat and some too-cool-for-school vocals (00:00-00:20) by way of introduction.  At the :20 mark (00:20-00:56), the wall of synth, which served them so well on Oracular Spectacular, makes its first appearance.  This is what the fan-boys really want from MGMT: more dripping wet synth anthems delivered triumphantly over electronic dance beats.  Around :32, the synth drops out and the song feels like it’s preparing for some good old-fashioned, Pixies (QRO live review)-esque loud/quiet/loud storytelling.  Then we get the first curveball.  At the :56 mark (00:56-1:11) MGMT hurls the listener about forty years backwards into the history of rock and roll with a rising crescendo that belongs on an early Beatles album.  An unexpected turn, though genre mash-ups are nothing new.  Instead of developing that hybrid, however, a third genre jumps into the mix at the 1:11 mark.  Let’s call it ‘scuzztronica’ (1:11-1:40): dark, danceable, minimalist.  The whole song could have sounded like this scuzztronica and the music press would have called it genius.  But MGMT just can’t restrain themselves.  At the 1:44 “Flash Delirium” enters the posse band zone with group-shout lyrics, making for another awkward transition.  And, insult to injury, the infamous flute solo cues up at 1:58.  It’s a bizarre moment in a bizarre song.  There are two minutes left in the song, but the flute has put the last nail in the coffin.  The flounce-y solo highlights everything about “Flash Delirium” that is patchwork, bloody awful, and worst of all, boring.  There’s zero “sonic and thematic coherence” in this track, never mind the entire album.  By the end MGMT cycles through Beach Boy choral studies, Pink Floyd reprises, and even a hardcore assault in the last ten seconds.  Each little piece of the pie has individual merit: why were they sewn and squashed together like some smarmy rococo Frankenstein?

What were they thinking?  Were they thinking at all?  Were they thinking too much?  Sophomore slumps are mostly a psychologically induced phenomenon.  Artists, adrift in the hyperbole of the music press, lose themselves for a little while.  The result is either an overly ambitious follow-up, or a tepid imitation of the debut.  Thankfully MGMT fall into the former category.  For all the eye-rolling turns of Congratulations, you are not allowed to forget that when MGMT fails big, it’s because they went big with the cringe-inducing grandeur of an Oh No Ono (QRO album review).  The twelve-minute “Siberian Breaks” is a mini rock-opera that’s not going to get anyone on the dance floor.  Nothing wrong with that in itself, but the scarcity of five-note synth motifs is going to let down the Saturday night crowd looking for another jukebox classic.  MGMT seem more interested in proving themselves to their musical heroes, like Dan Treacy and Brian Eno (see the homages, “Song For Dan Treacy” and “Brian Eno”), than pleasing their fanbase.  It’s like playing a live gig facing backwards: expect confusion, if not outright hostility from the audience.

MGMT muffed this one, no doubt.  History will judge Congratulations more kindly than current opinion – but not by much.  The band overreached; and when they came up short there were no singles to provide a soft landing (only a silly scratch ‘n’ sniff album cover with limited edition MGMT scratch coin).  It’s back to the drawing board.  Happily the proven formulas of Oracular Spectacular are laying in wait for the time when MGMT decides it wants to start making pop music again.  Let’s hope it’s the next album, and every album after that.