Mice Parade : What It Means To Be Left-Handed 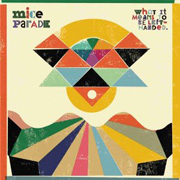 What It Means To Be Left-Handed is without a doubt Mice Parade’s most focused record to date.  After ditching their instrumental, jam-based roots on their previous release, the group has finally begun to fully realize the new direction they’re heading in.  Adding more polish this time around, their latest release proves to be their best and most accessible yet.  This is what fans of Mice Parade’s last album have been waiting for.

Perhaps it would be best to first describe that previous album.  Mice Parade had already released six albums full of instrumental jam sessions.  Then, with their 2007 self-titled release, the band decided to change gears and create shorter indie rock songs, with bandleader Adam Pierce (whose name is an anagram for the band’s name) providing lyrics and vocals.  Now the band is running full-force with this concept on WIMTBLH, integrating more rock roots than fans can shake their left fists at.

Fortunately, it works exceptionally well here.  While WIMTBLH may be less jam-based and more accessible than previous releases, it still takes the listener to areas they wouldn’t normally expect in an indie rock album.  If you’re looking for something new that dares to change things up a bit, this album has it all.  Songs vary from simple mandolin melodies to heavily distorted guitar parts more akin to My Bloody Valentine.

Fans of the earlier Mice Parade will still feel right at home as well.  The album still has Pierce’s signature authentic and memorable drumming that refuses to ever take a backseat for any of the new sounds being shelled out this time around.  Even the overall melodies and rhythms still contain that sense of jam potential in a similar vein to The Slip’s Eisenhower (QRO review).  While the songs may be cut short in the studio, there is still that opportunity for stretching them out a bit in the band’s live shows.  Pierce has also continued to incorporate a number of exotic female guest vocalists as well, providing a wide range of genres heard throughout the album.  At one point, listeners will find themselves hearing tropical island themes, while at the next they’ll be bobbing along to alternative rock anthems, all in the span of a few minutes.

That’s not to say this album isn’t without its faults.  A couple of the short, instrumental tracks begin with a good build up, but ultimately end just as they start to get really interesting.  This is something the band had difficulty with on their previous release as well, but again, it would appear as though the band is mostly using these as stepping stones as they stretch them out in their live shows.  Pierce’s voice also continues to be rather monotone, but there isn’t much that can be done about that.  Mice Parade’s initial albums have chiefly lacked vocals, so it’s at least nice to see the band’s main member start to come out of his shell a bit and reveal his voice to the world.  Plus, there are enough distinguishing guest vocalists here to keep even those who are somehow offended by his voice occupied.

All in all, Mice Parade remains a band that will always be indefinable.  Their latest release, while stepping further away from their roots, shows an overall sign of growth in how much the band has changed in the past decade or so.  With eight albums now under their belt, that each offer a unique experience, their presence has become somewhat staggering for those not already in the know.  That said, What It Means To Be Left-Handed not only proves itself as an exception standalone record, but also as the perfect gateway for those looking to see what Mice Parade has to offer.