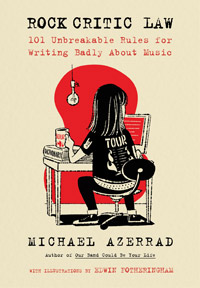 Rock music criticism can often seem like it’s trapped in the amber of the sixties and seventies, from Hunter S. Thompson to Cameron Crowe’s Almost Famous. However, Michael Azerrad has been breaking it out of that stasis for decades now, with such books as Come as You Are: The Story of Nirvana and Our Band Could Be Your Life: Scenes from the American Indie Underground 1981-1991. And now comes the hilarious Rock Critic Law: 101 Unbreakable Rules for Writing Badly About Music, a fun & illustrated skewering of his own field.

Rock Critic Law is not detailed histories like much of Azerrad’s output, but a ‘list of tweets turned into a book’, a kind of book that Azerrad even admits he doesn’t like. With a sentence every two pages, it can be read in a single sitting. But pretty much each sentence is funny, at least if you’ve read music criticism, especially rock music criticism before (Azerrad also admits that the book is focused on the genre, which he describes as slowly moving into “niche status”). Each “rule” also comes with an illustration by Edwin Fotheringham (New Yorker, Vanity Fair) that likewise skewers the field’s self-seriousness.

Admittedly, someone such as this critic, who does music criticism (for not nearly as long or as successfully), will like this book more than just about anyone else. But it’s a charming takedown, one that can be revisited multiple times. Now to see how often I’ve said “seminal”…