If this is Midnight Oil's last tour, they went out in style at New York’s Hammerstein Ballroom ... 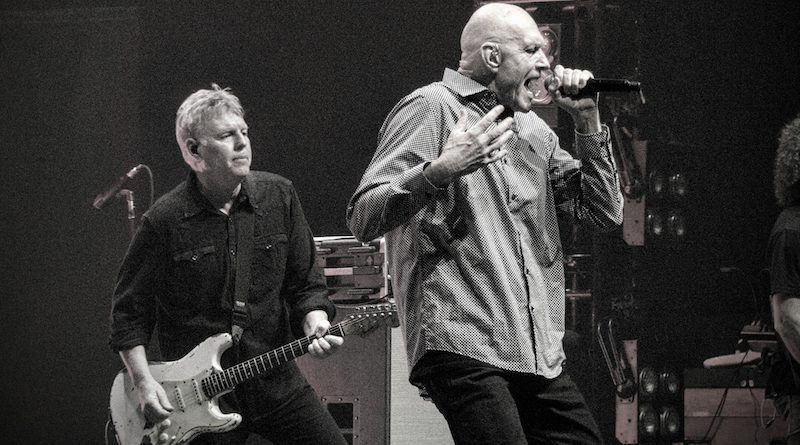 Click here for photos of Midnight Oil at Fox Theater in Oakland, CA on June 4th, 2022 in the QRO Concert Photo Gallery

If it feels like we’re living in end times, there are good reasons for that (disease, war, inflation, climate change, death of democracy, etc.), but they can also be overblown (remember Y2K? Remember how George W. Bush was going to end the world? How Reagan was going to?). But the endings that do happen now feel so final, from celebrity deaths on. Thus, it was very real when Australian greats Midnight Oil announced that their 2022 tour was going to be their last, and if it is, they went out in style at New York’s Hammerstein Ballroom on Sunday, June 19th.

The tour is officially behind this year’s Resist (QRO review) – which they insist isn’t their final album – but one couldn’t help but feel the ‘last big hurrah’ atmosphere at Hammerstein. A band that’s been around since the seventies has garnered a long & loyal following, and so many were out at the NYC stop. The group had only done two American tours since reuniting in 2016, the last one five years ago, as the next one planned was cancelled due to COVID lockdown. So, this wasn’t just your last chance to see the Oils; it was also your first in a while.

And they did not disappoint. The group had the tough task of marrying both a tour behind Resist and doing as many oldies that the fans wanted one last time, but pulled it off. Yes, it opened with Resist’s slow burn “Nobody’s Child” and then the fiery “At the Time of Writing”, plus the pseudo title track anthem “We Resist” to open the encore, but there was still time not just for the old hit singles, but even some surprises.

Yes, we got such Oil classics as the impossibly powerful “The Dead Heart” (so many camera phones in the air at the signature start of the chronicle of the aboriginal Stolen Generation). “Blue Sky Mine” was surprisingly upbeat for the crowd, considering its take on corporate destruction. The following “Power and the Passion” not only had a killer drum solo from Rob Hirst (including corrugated iron behind him), but also is the best song to dance The Robot to this side of Flight of the Conchords’ “Robots”. Midnight Oil went into their encore break with the powerful back-to-back of “Beds Are Burning” and “Forgotten Years”.

One probably expected older song “US Forces”, given where they were playing, even “Redneck Wonderland” as well, but closing the evening with “Hercules” was a curveball – and coming after single “Dreamworld”, that was, like “Forgotten” after “Beds”, a case of the band not ending on the song you expected, but giving you one more.

Singer Peter Garrett was on fire, perhaps not surprising, until you realize that the former M.P. is almost 70 (to be fair, he’s been bald a very long time…). It was particularly great to see him engage with the rest of the band, from going up behind Hirst on drums while playing harmonica to even greeting touring members Leah Flanagan & Liz Stringer (the singers are alternating opening slots, with Flanagan opening this night – QRO photos) and saxophonist Andy Bickers. Midnight Oil brought the extra help in part due to the tragic absence of bassist Bones Hillman (“Takes three people to do Bonesy’s job…” was overheard in the crowd), and Garrett gave a really nice tribute to their late member, noting that, just before he passed in 2020, he urged the then-grounded band to, “Do more playing, do more playing…” There were introductions for everyone, from current bassist Adam Ventoura to always guitarists Jim Moginie & Martin Rotsey.

And yes, there were political speeches. Midnight Oil have long been a political band, and the times haven’t gotten less political. Moreover, the issues Garrett sings about haven’t gotten any less relevant. He talked about Australia’s First Nations and America’s (Flanagan namechecked Manhatta’s original Lenape Tribe in the open), before “Gadigal Land” (QRO review) and “First Nation” off of return record The Makarrata Project (QRO review). He also talked about Midnight Oil having once played in front of the nearby Exxon building in New York, and how, even with some slight reform to their actions these days, fossil fuel companies are still criminally wrecking the planet. There were also more upbeat notes, like dedicating Resist’s “Reef” to those people & organizations who are working for & “can see a brighter future.” And he loved the beautiful old Hammerstein (QRO venue review) – though noted that back home the building probably would have been torn down for something newer & uglier.

Like the reports of deaths, endings can be greatly exaggerated, but they have been hitting us hard as of late. Australia, America & the world still needs Midnight Oil, and one certainly hopes they will keep making music (and hope against hope that they’ll get back on the road again, even in their seventies…). At least this show was a fitting, relentless end of a relentless band.