Australian modern music has had few acts as important as Midnight Oil.... 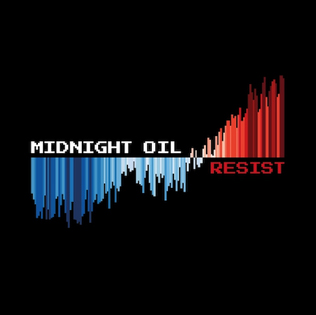 Australian modern music has had few acts as important as Midnight Oil, who managed to become national icons while also fiercely political, mainstream success with alt-punk sounds, iconic hits and a deep catalogue. Thus, it is sad that they’ve announced their 2022 tour will be their last, when the world needs them more than ever (as of this writing, Putin’s invasion of Ukraine rages on). They say there still will be more music made, but even if not, Resist is classic Midnight Oil.

Click here for photos of Midnight Oil at Fox Theater in Oakland, CA on June 4th, 2022 in the QRO Concert Photo Gallery

From the title onward, yes, singer Peter Garrett’s evocative advocacy is on full display (this is a musician who followed his words with deeds, having actually served as a Labour M.P. during the band’s early twenty-first century hiatus). Opener “Rising Seas” is both a call to action for adults and an apology for inaction to children. “At the Time of Writing” is both tragic and active. The band also keeps their wide sound, not relying solely on punk anger but brings a grand call with “We Resist”, echoing loss on “We Are Not Afraid”, and a melancholy sway to “Tarkine”.

It’s now over forty decades since Midnight Oil first started, so you can forgive the band for wanting to stay off the road. But they’ll always have something to say with their music.