Midnight Oil took their time, but have carefully crafted the powerful 'Makarrata Project', a seven-song mini-album that focuses on aboriginal rights & stories.... 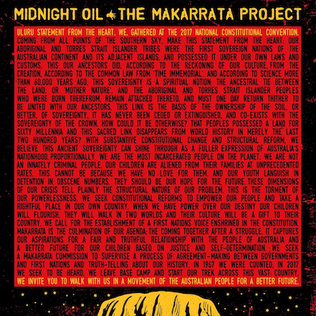 A few years ago, Australia’s seminal agit-rock band Midnight Oil reformed (after singer Peter Garrett’s time as an actual Labour MP), reengaging a no-less-political world with massive tours.  But the big question with any reunion is: Will there be new material – and will it be able to live up to very high expectations?  Midnight Oil took their time, but have carefully crafted the powerful Makarrata Project, a seven-song mini-album that focuses on aboriginal rights & stories.

While the theme of Makarrata is constant, the musical styles vary.  Single “Gadigal Land” (QRO review) is the powerful indie-rock call that Midnight Oil do so well, up there with classics like “Beds Are Burning”, and there is a cutting attack in opener “First Nation”.  But “Change the Date” is a moving carry, while aboriginal Australian Alice Skye sings the resigned tragedy “Terror Australia”.  Indigenous songwriting icon Frank Yamma leads the almost gospel-folk “Desert Man, Desert Woman”.  And the record closes with hope in Outback walkabout “Wind in My Head” and anthem “Come On Down”.

“Come” is partnered with first the Uluru Statement from the Heart, the 2017 statement from the First Nations National Constitutional Convention, which called for a “First Nations Voice” in the Australian Constitution and a Makarrata Commission to oversee the agreements between the Australian government and the Aboriginal and Torres Strait Islanders (like any significant spoken portion of a music album, it sits awkwardly on repeat listens).  The Makarrata Project is a focused call for change and progress, as well as a great listen by a great band’s great return.

Hannah Georgas – “Pray It Away” (with Matt Berninger)