At this point, can yet another alt-rock reunion excite? Midnight Oil can.... 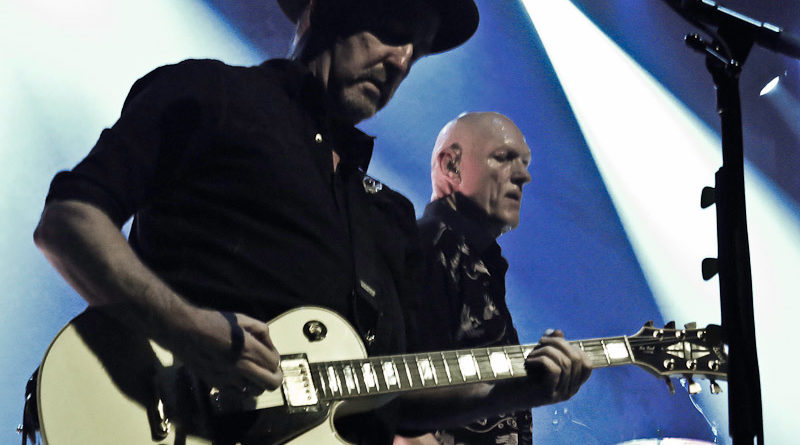 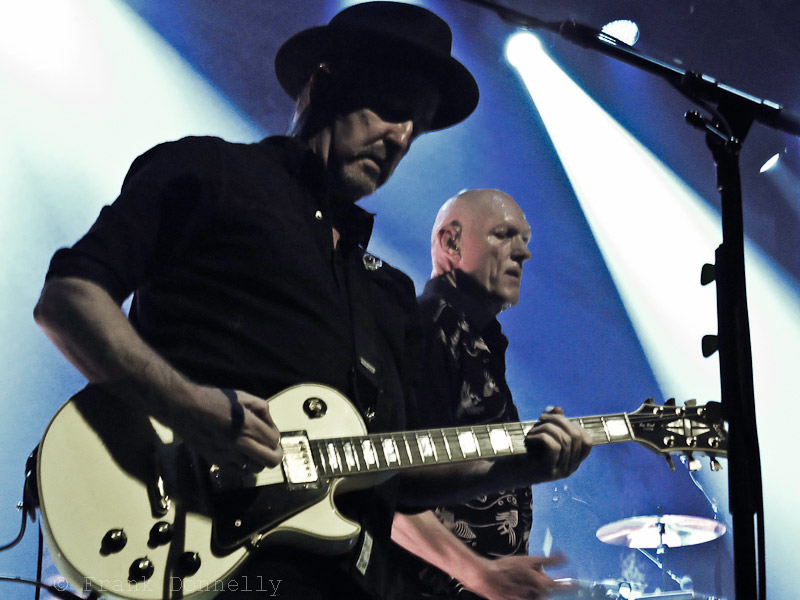 At this point, can yet another alt-rock reunion excite? Seemingly everyone who broke up and can still get back together already have, and the shock of seeing the likes of the Pixies headline Coachella over a decade ago has long since past. The well of who can come back can seem to have been exhausted, with too many these days hardly necessary (insert your own snarky pick here).

But proving that wrong is the reunion of Midnight Oil, the Australian greats of the eighties that you forgot how much you wanted to see them now. Their reunion tour has been as vital and impressive as they ever were, coming to New York’s Webster Hall (QRO venue review) on Saturday & Sunday, May 13th & 14th.

In many ways, Midnight Oil were ahead of their time with their alternative rock start in the late seventies, but stuck together to reap huge success in the home country and abroad starting in the next decade. Known for their political edge from singer Peter Garrett, they challenged the conservatism of their era, breaking up early in this new millennium after giving Prime Minister (and friend of George W.) John Howard one more protest in their performance to close the 2000 Sydney Olympics. Indeed, Garrett went into politics full-time, serving as a Labour MP in the post-Howard government. There had been a few Australian one-off benefit performances, but only this year has the band embarked on their ‘Great Circle’ tour, including playing the U.S. for the first time in twenty years.

The set on Saturday night in New York began with a powerful “Sometimes” announcing their return, and it would not be the last from Diesel and Dust. That 1987 record got the lion’s share of the set list (including the following “Bullroarer”), followed by its 1990 follow-up Blue Sky Mining. Those two records were their biggest hits in America, so it was not surprising that so many from the pair were played on the Saturday night, NYC date of their reunion tour. However, the set list was almost entirely different on Sunday (save for singles), the band likely thinking that would be for the deeper fans – Garrett even mentioned that many people were going to both nights, and that many people had travelled far for these shows [QRO’s own photographer first caught the Boston show on Thursday, then travelled down to NYC for both nights at Webster].

The only songs that were played both nights were the big hit singles, and interestingly on this tour Midnight Oil has been holding them until the end of the evening, going into the encore. Word is that they practiced/relearned all of their songs, some hundred-plus, which has enabled them to stack each show with ‘rarities’, for most of the main set & the encores [QRO’s photographer had seen them many times back in the day in Britain & Ireland, but was still remarked after coming out of the photo pit, “I never thought I’d hear that song live…”]. In addition to “Sometimes” & “Bullroarer”, also from Diesel was “Arctic World” and a carrying “Wakaruna”, plus encore “Sell My Soul”; Blue Sky gave a dark, compelling “Bedlam Bridge”, pub-emotional “Stars of Warburton”, and an absolutely revelatory “Forgotten Years” in the encore. Other non-single highlights from the main set included a rollicking “Don’t Wanna Be the One” (the sole piece from 1981’s Place Without a Postcard), an active “Somebody’s Trying To Tell Me Something” (1982’s 10 9 8 7 6 5 4 3 2 1), huge cheers for a more acoustic, but even more moving, “My Country” (1993’s Earth and Sun and Moon), and the always appropriate “When Generals Talk” (1984’s Red Sails In the Sunset). 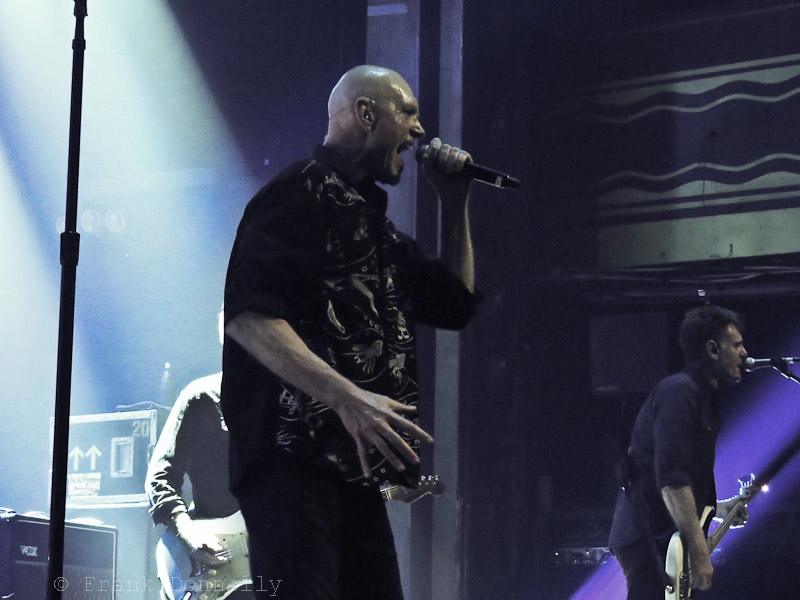 Putting the singles to the back end, all in a row, could have indicated that Midnight Oil weren’t that excited to play them, but knew they had to. Instead, it let the show build & build to a ferocious energy. 10 to 1’s “Power and the Passion” might be the most angular anthem ever, while Diesel’s “The Dead Heart” still carries its message of the “true country” (written about the ‘Stolen Generation’ of Australian aborigines taken by the government from their native families, from the start of the twentieth century into the seventies). Blue Sky Mining’s title track has only become more relevant with the recent environmental rollbacks for corporations in struggling Trump coal country & beyond (“Nothing’s as precious / As a hole in the ground”), its pressing power amazing live. Diesel’s aboriginal civil rights anthem “Beds Are Burning” is still their best known song, indeed one of Australia’s best known (sort of the dark flipside to Men At Work’s silly “Man From Down Under”), but, as Garrett pointed out, civil rights are applicable to everyone (and it’s not like America doesn’t have its own native civil rights issues – it was dedicated this night to those fighting the Dakota Pipeline at Standing Rock). And rather than closing with “Beds”, it was fellow Diesel single “Dreamworld” that went into the encore break.

The encore return opened with Garrett promising “Instant Karma” for former ExxonMobil CEO/current Secretary of State Rex Tillerson, covering John Lennon’s “Instant Karma” – which they had played in front of Exxon headquarters in New York almost three decades ago to protest the Exxon Valdez oil spill. Following were Diesel’s “Sell My Soul” and Mining’s “Forgotten Years”, a close, and then another encore with Red Sails’ “Best of Both Worlds”. 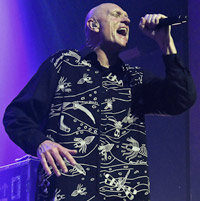 For a band whose members are in their sixties, they didn’t lack for energy on stage. Garrett of course played frontman, his signature baldhead leading the fray (and on harmonica for “Blue Sky Mine”). And yes, he got in some funny digs on America’s current political situation, such as apologizing for being gone so long, adding, “The amount of time we were away is in inverse proportion to how long your person will be in the White House…” He also talked global warming, ExxonMobil, and more (sometimes a bit hard to make out through his Aussie accent). And yes, Garrett’s head wasn’t the only bald one with an older, male audience, which also had a high percentage of not just Aussies, but also Brits & Irish.

The ‘Great Circle’ Tour continues in North America into June, followed by Europe in June & July, and even South Africa & Singapore later in the summer – with another North American stop in August (including the larger Terminal 5 on the 21st), before New Zealand and finally back in Australia to finish. A very welcome reunion. 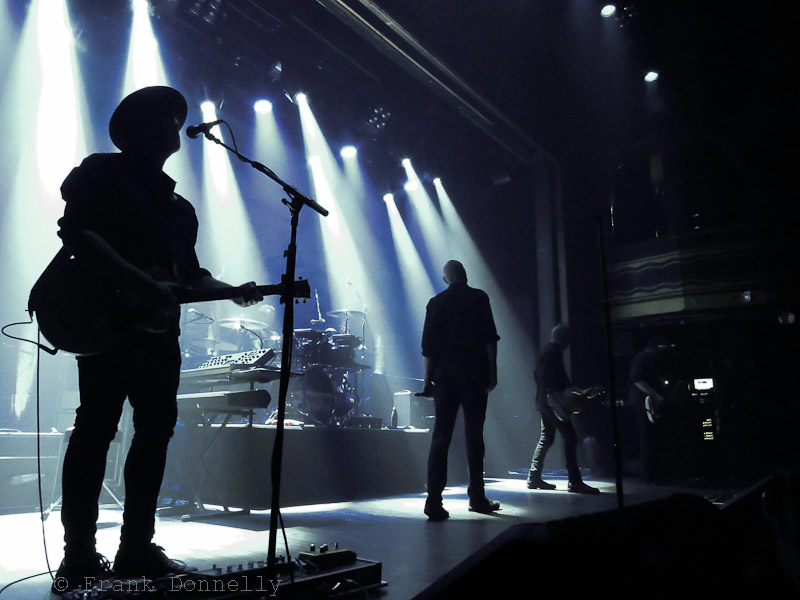