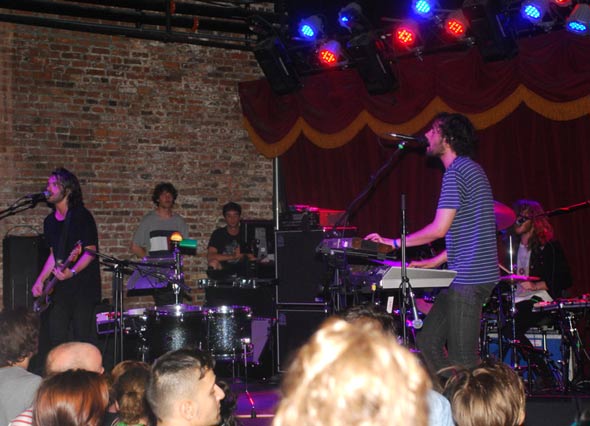 Saturday, the Twenty Fourth of July, Twenty Ten.  It’s a sweltering ninety-something degrees Fahrenheit (or over 32 degrees Celsius for those inclined to use the metric system) out on the streets of New York, but inside the four walls of the blissfully climate-controlled Brooklyn Bowl (QRO venue review), the denizens of Williamsburg and its surrounding neighborhoods preoccupy themselves with beer, bowling & French bread pizza, and pay little attention to the heat out of doors.  The lineup on this night is rather intercontinental; the Chicago-based Yawn is the first band to take the stage as people begin to trickle onto the dance floor while Fight Club and the Discovery Channel/BBC documentary series Life play on the Brooklyn Bowl’s several projection screens.  Yawn, contrary to what the name would lead one to believe, was lively and slightly tribal, and hardly soporific.

The Oberlin (Ohio)-turned-Amsterdam remix duo, Teengirl Fantasy, followed Yawn and filled the venue with a more ambient type of sound.  Members of the night’s final band, the Australian Midnight Juggernauts, could be seen wandering about the establishment or seated upon an arm of one of the Brooklyn Bowl’s oversized (and over-tacked) leather couches, watching the show or attempting to hold a conversation amidst the noise.  People continued to filter onto the floor, either to dance or to stake their claim of a spot to watch the Juggernauts’ set.  Meanwhile, Life concluded and was replaced by 9, leaving the Brooklyn Bowl patrons to wonder at the (rather wonderful) randomness of the club’s film library.

Click here for QRO’s interview with Midnight Juggernauts in 2009

Click here for QRO’s interview with Midnight Juggernauts in 2008

Click here for photos of Midnight Juggernauts from two nights before at Santos Party House in New York, NY in the QRO Concert Photo Gallery

Click here for photos of Midnight Juggernauts at CMJ 2009 in New York, NY in the QRO Concert Photo Gallery

Click here for QRO’s review of Midnight Juggernauts at Bowery Ballroom in New York, NY on May 9th, 2008

It was after 11:30pm before the Midnight Juggernauts take to the stage.  The once nearly empty dance floor is almost full of people as the Juggernauts introduced their set with the aptly named “Intro” before delving into a mix of songs from their two full length albums, Dystopia (QRO review) and The Crystal Axis.  A waistcoat-sporting Daniel Stricker was almost Animal-esque on the drums (and he’s got the hair for it), 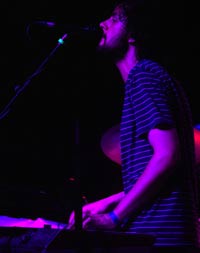 and Vincent Vendetta mostly sang and played the synths whilst moving in an almost yoga-like fashion (he could indeed frequently be seen standing upon one leg at the keyboard).  Bassist/guitarist/vocalist Andy Juggernaut took a slightly more low-key presence on stage right, but came front and center midway through the set to take over lead vocals and synths on “Tombstone”.

The Midnight Juggernauts moved the crowd.  The show started with the audience standing mostly still or swaying to the beat, and ended (rather abruptly due to technical difficulties with one very important synthesizer) with the masses dancing and singing.  All of the songs are great, though “Tombstone”, “This New Technology”, “Into the Galaxy”, and “Vital Signs” (during which Vendetta rhythmically attacked an extra pair of toms) were among the most memorable.  There seemed to be little artifice to the show.  There were some mess-ups, and the sound wasn’t always perfect (the first few songs left the audience screaming, “Turn up your mic!” to Mr. Vendetta who, with his in-ear monitors on, could understandably not hear a bit of what they were saying), but perfection wasn’t the point.  The show was about three guys who would probably be playing the same thing whether the audience was there or not, and that’s what made it so good.