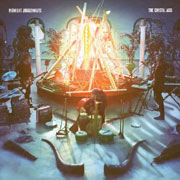 When the Midnight Juggernauts appeared a few years ago, the Melbourne trio was seen as the ‘Australian wing’ of the growing electro-dance/rock movement, like an Aussie version of France’s Justice (for whom MJ opened for, which first got them notice worldwide).  Since then, Australia has more than put its own name on the electro-map with acts like Cut Copy (QRO live review) and The Presets (QRO spotlight on), while the Juggs receded a bit.  But now they’re back on their local label with the strong Crystal Axis, though the procession that the band favors on it, over the Francophile debut Dystopia (QRO review), can dip a little.

Click here for QRO’s interview with Midnight Juggernauts in 2009

Click here for QRO’s interview with Midnight Juggernauts in 2008

Click here for photos of Midnight Juggernauts at CMJ 2009 in New York, NY in the QRO Concert Photo Gallery

With synths as the main weapon in their arsenal, the Midnight Juggernauts were always going to risk being cheesy, but it’s not a fate they ever suffer too much on The Crystal Axis – just, on pieces like “Vital Signs”, there’s more than there was on Dystopia.  Instead, the procession style of the new record leaves some of the songs less standing out than their debut, as “Lara Versus The Savage Pack”, “Virago”, and “Winds of Fortune” just proceed on a little too much.  But even if it doesn’t quite match its predecessor, The Crystal Axis still delivers choice Midnight Juggernaut material, electro-rock that ‘rocks’ while retaining electro-agility.  The band is better when they go bigger, such as “Lifeblood Flow”, ‘anthem out of the darkness’ “This New Technology”, pushing into “The Great Beyond”, and “Cannibal Freeway”, which best combines the Juggernauts’ press outward and upward with their synth sound.

Click here for QRO’s review of Midnight Juggernauts at Bowery Ballroom in New York, NY on May 9th, 2008

When EMI-owned Astralwerks picked the Midnight Juggernauts out of Australia, the band did feel a little ‘too’ Astralwerks-y, too similar to so many other acts on the famed electro-dance label.  Well, the formerly independent imprint has been pretty well subsumed into its major label, while the Juggs have gone their own way.  Not a breakthrough debut, The Crystal Axis is a solid follow-up.