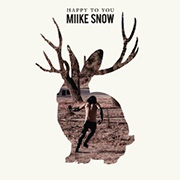 Miike Snow plays a special breed of music.  Their ability to craft catchy yet intricate songs really shows through on their second album Happy To You.  Hailing from Sweden, these gentlemen are doing a great job of carving a path of originality in today’s music scene.

Their first album, 2009’s Miike Snow, was a catchy blend of mostly electronic sounds with a bit of acoustic instrumentation thrown in here and there, mostly drums.  Happy To You builds off of that foundation and presents a more equal balance between the two.

Click here for photos of Miike Snow at 2012 Coachella Festival in Indio, CA in the QRO Concert Photo Gallery

Click here for photos of Miike Snow at 2012 Ultra Music Festival in Miami, FL in the QRO Concert Photo Gallery

Click here for QRO’s review of Miike Snow at Hawthorne Theater in Portland, OR on April 14th, 2010

Click here for photos of Miike Snow at SXSW 2010 in Austin, TX in the QRO Concert Photo Gallery

This shows up on songs like “Black Tin Box”, which exhibits mainly synthesizers but also employs some acoustic percussion.  Or there is also the album’s second song “The Wave”, which has electronic percussion, but then also uses an acoustic piano.  These are just a couple examples of how this album is fun to listen to because it makes you really listen to the songs to try to figure out what the musicians are doing.

Another piece that stands out is “Bavarian #1 (Say You Will)”.  This number is the best example of how Miike Snow have some similarities to the sound of Gotye’s Making Mirrors (QRO review) both in vocal and musical styles.

Another particularly interesting thing about Miike Snow’s music is that it is an eclectic mix of indie pop and a bit of an R&B feel.  Imagine if Death Cab For Cutie and Jamiroquai made an album together and that comes close to what some of the songs on this album sound like.  It may not be something that listeners would guess as being appealing, but it works.  On Happy To You this is best exemplified in the closing track “Paddling Out”.

Give this album a chance.  It’s one of those that will help you enter a dreamy state of escape from the pressures of everyday life.  These guys are doing something that they believe in and the result is something different.  That’s a respectable thing to be and do in today’s music scene.