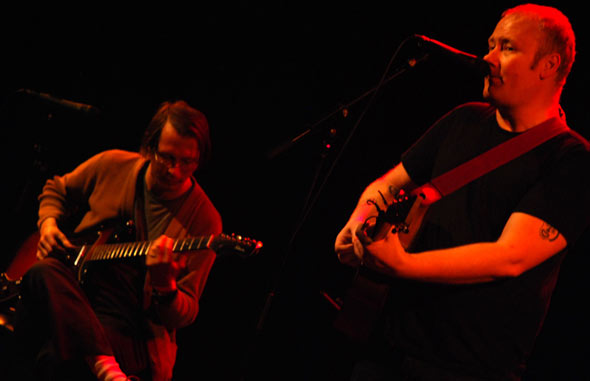 You might remember Mike Doughty from what seems like a lifetime ago (for you and for him), when he was the lead singer in alt-rap act Soul Coughin, and/or guesting on lead vocals for BT’s excellent “Never Gonna Come Back Down”, both of which are a decade old.  But Doughty’s kept going, doing everything from beating heroin to collaborating with/opening for Dave Matthews, and has put out a handful of albums in the twenty-first century, most recently with last year’s San Man, Happy Man.  He’s developed something of a cult following, thanks to his engaging live shows – so engaging that you don’t have to be part of the cult already to enjoy them, like at New York’s (le) Poisson Rouge on Saturday, April 24th.

While Sad Man and the preceding Golden Delicious were both recorded with a full band, Doughty still sometimes tours stripped down, just him and guitarist/cellist back-up Andrew ‘Scrap’ Livingston, and that was the set up on Saturday night.  (Le) Poisson Rouge is well designed for such an arrangement (QRO venue review), bringing out the tables and making it a (mostly) seated show.  This also kept chatter down, always a problem at solo (or in this case, near-solo) shows – though Doughty & Livingston provided more than enough of that on their own. 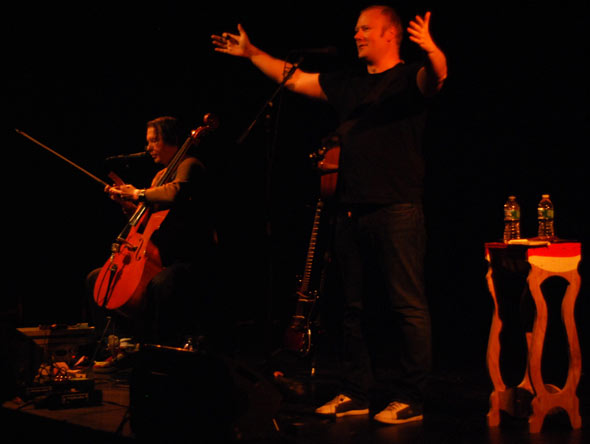 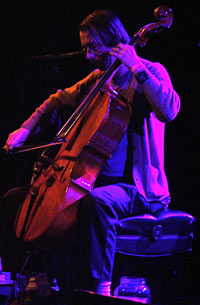 This is because Mike Doughty employs something more bands should do: a question jar.  A few times during the set, usually when having to changing tuning or the like, Doughty would ask ‘Scrap’ to read out loud some questions from the question jar, pieces of paper with queries written down by the audience before the show started (unfortunately, it was rather hard to add questions during the set – should have passed around the jar, or a second jar, at some point).  A standard of Doughty shows, many of the questions displayed how well the audience already knew the artist:

“What’s your favorite song, other than ‘Fire Truck’?”

“Fire Truck” is the first song Doughty wrote, as a child, whose lyrics are simply, “Fire Truck!” repeated ad infinitum (think Spinal Tap’s “Cry All the Way Home”, only done by a hyperactive kid), and one he always says is his favorite – indeed, Doughty couldn’t pick a second favorite.

“Is Nyack your favorite town in Rockland County?”

This was asked because Doughty name-checks Nyack in “Busting Up a Starbucks”, but Doughty admitted that it was his favorite town in Rockland Country – because it was the only town in Rockland he knew of, other than West Nyack, which it was far superior to. 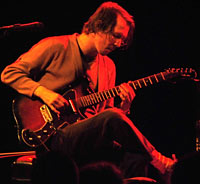 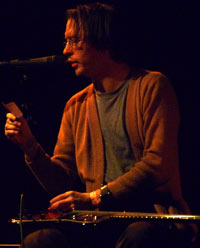 Other questions were less ‘in the know’; more open, and let Doughty really humor the crowd.  He talked about his first jobs, in McDonalds, then putting tags on military uniforms (“Which was infinitely more rewarding” – a comment more about McDonalds than the military…), where he worked with a woman who never spoke to him, except once, to ask him if he’d seen that movie on TV the night before.  Doughty hadn’t, but of course had said that he had, with which the otherwise silent woman replied, “He can sure fly that plane…”  Doughty also gave the crowd his favorite palindrome, “Able was I ere I saw Elba” (better than the standard “A man, a plan, a canal, Panama”, but no “Sit on a potato pan, Otis”…), favorite chord, and more (as well as describing ‘Scraps’ as both: a) an editing machine, when Livingston chucked one question without saying it aloud, and as b) a homeless golf instructor, in look – there was a homeless golf caddie in Happy Gilmore…). 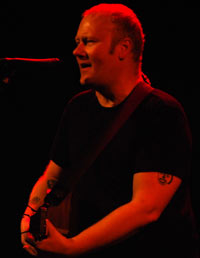 Doughty’s music is similarly wordy, with such titles as “Busting Up a Starbucks” (played after the Nyack/Rockland discussion – the name-check line in the song got a healthy extra cheer), “Thank You, Lord, For Sending Me the F Train” (which does run right near (le) Poisson Rouge…), “Down on the River by the Sugar Plant”, and “Looking At the World From the Bottom of a Well”, all of which Doughty played (though no “Fire Truck”…).  He still has the accomplished rhythm and cadence that made Soul Coughin stand out in the nineties; laid over alt-folk/rock and even jam (he did collaborate with Matthews on the recording of another number he did that night – sans Matthews – “Tremendous Brunettes”), rather than alt-techno beats, it’s less showy, more honest.  And Doughty can go out-and-out alt-country, such as with “Year of the Dog” or ‘Nectarine (Part Two)” (both from Sad Man, which did dominate the set).

Mike Dought playing “Looking At the World From the Bottom of a Well” live at (le) Poisson Rouge in New York, NY on April 24th, 2010:

As the evening wore to a close, Doughty pulled out another staple (one he even admitted that some in the audience might already know), “The song before the fake last song”, wherein he told the crowd that, after the song after the one that he & Livingston were about to do, they would say goodnight, and rather than walk-off stage, only to come back on, would just turn around, with their backs to the crowd, until they felt there had been enough cheering for them to ‘return’.  And that’s exactly what he & ‘Scrap’ did. 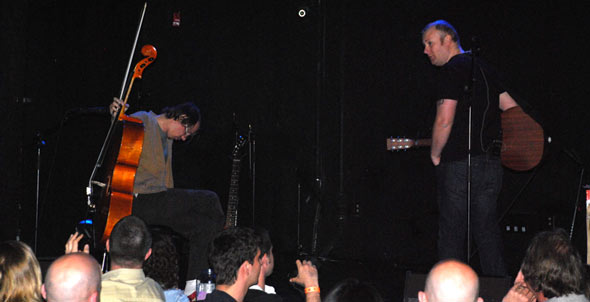 Items like that, or especially the ‘question jar’, could be excluding for new fans and/or grow tiresome for old ones, but neither was the case.  So funny were Doughty’s responses, so engaging was he with the crowd (while still nicely balancing the ‘I’m the one on stage you came to see/This is all for your enjoyment’ that some acts, especially solo/near-solo ones, fail to manage), that newcomers were left wondering why more acts don’t have questions jars, and regulars still searching for that perfect question (something that does occupy your brain before/during/after any show of his).  Mike Doughty might be a singular artist, but he’s not exclusive at all.

Mike Dought playing “Looking At the World From the Bottom of a Well” live at (le) Poisson Rouge in New York, NY on April 24th, 2010:

Adam Olenius of Shout Out Louds