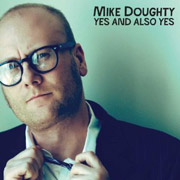 Even by the standards of the music industry, Mike Doughty has had an unusual career.  He fronted the electro-rhythm-meets-indie-rock outfit Soul Coughing during America’s nineties upswing in electronica, but broke up the band & was dropped by major label Warner over his heroin addiction.  Doughty beat that beast, but was back to the beginning, selling CD-R copies of his Warner-rejected Skittish by the stage after his solo shows.  It was only a chance meeting with Skittish fan Dave Matthews at Bonnaroo that got him on Matthews’ ATO Records and back to a more stable success.  And now Doughty strikes out on his own again with the self-released Yes and Also Yes – making it all the more remarkable how his rhythm and restraint haven’t changed, even as he varies things up.

While Doughty tours either with a band or at least main sideman Andrew ‘Scrap’ Livingston, his recorded work is very much his restrained self.  Doughty also hasn’t lost the rhythm of his Soul Coughing days.  Together these two facets frame much of Yes, from the resigned opener “Na Na Nothing” through such pieces as the more active “Into the Un”, ‘MC Doughty’ rhymes of “Day By Day By” and “Vegetable”, ominous “The Huffer and the Cutter”, sadder “Rational Man”, and even agit “Weird Summer”.  All work well, even if none can be considered the record’s ‘standout’.

Click here for photos of Mike Doughty at Bowery Ballroom in New York, NY on November 19th, 2011 in the QRO Concert Photo Gallery

But at fourteen tracks, Doughty doesn’t just tweak one style on Yes, as it also showcases his singer/songwriter country-folk side.  Easily most notable is his duet with Roseanne Cash, “Holiday (What Do You Want?)”, whose alt-folk brightness is actually rather moving.  Though when Doughty strips down to acoustic on “Telegenic Exes, #1” and “#2”, it doesn’t have quite enough effect on such a restrained album.  Better is the country-road gallop of “Have At It”.

Mike Doughty’s rhythm & restraint are welcome in any environment.  Is there any artist who’s been an electronic favorite and Dave Matthews’?  Has anyone ever worked with both Roseanne Cash and electronic artist BT (on BT’s great “Never Gonna Come Back Down”)?  Yes, and Also Yes.