<img src="http://www.qromag.com/wp-content/uploads/2009/10/milesrobinsonsummer.jpg" alt=" " />The too many named Miles Benjamin Anthony Robinson follows up his (completely) self-titled debut with <i>Summer of Fear</i>. ... 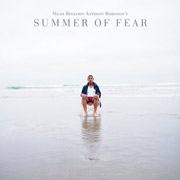 The too-many-named Miles Benjamin Anthony Robinson (QRO interview) turned a lot of heads with his (completely) self-titled debut, including those in Brooklyn art-rock big-names the likes of Grizzly Bear (QRO live review) and TV On the Radio (QRO live review).  A full-backing band tour followed, which only brought problems (most in his backing band seemed to pair off romantically, then split up, and Robinson had to end up going solo), but the singer/songwriter sat down for a new recording session, produced by Kyp Malone of TVOTR (also of Iran, Rain Machine).  Definitely higher-fi, but also a lot more twang, especially in Robinson’s vocals, Summer of Fear impresses when he presses, and gets good when he goes big.

While Robinson reaches his highest points when he presses, he’s more consistent when he goes bigger near the end of Summer.  Parts 1 & 2 of the title track, in-between-those-two piece "Death By Dust" and closer "Boat" all feel a little similar in their growing, brightening rock, but you don’t get sick of the sound.  However, those can’t quite match the standout pressing pieces, "The Sound" and "Trap Door", whose emotional, world-weary press is still uplifting, with a nice balance between Robinson’s vocals & the keys on "Sound", and vocals & his guitar on "Trap Door".

Click here for photos of Miles Benjamin Anthony Robinson at Music Hall in Williamsburg in Brooklyn, NY on June 7th, 2008 in the QRO Concert Photo Gallery

Robinson’s vocals can let him down at times, as his Dylan-twang voice can feel affected (and is also the most notable change from Miles Benjamin Anthony Robinson).  But one can also get used to it – so used to it, in fact, that twang-tracks that follow "Sound" & "Trap Door", "Hard Row" and "The 100th of March", respectively, are comparatively forgettable.

Robinson has a new (all-male) backing band, and is hitting the road soon on the back of Summer of Fear.  He hasn’t evolved in the most straightforward or expected way, but MBAR is certainly evolving.