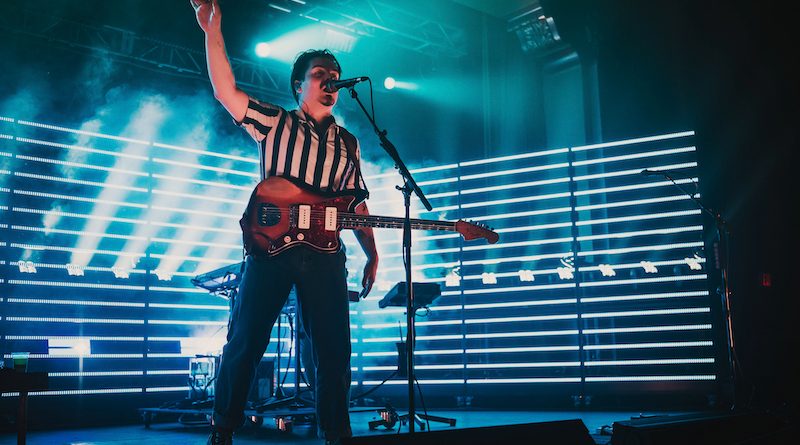 After several rescheduled shows, German alternative rock band Milky Chance finally made their way to Tampa Bay on Wednesday, December 8th. Playing at The Ritz Ybor in the Ybor City district of Tampa, Florida, the band was set for their sold out show on their North American 2021 Tour. Accompanied by local artist Kerry Courtney, the venue was filled wall-to-wall with hundreds of eager fans, many of whom have been holding on to their tickets for a year.

Opening up the show was local singer songwriter Kerry Courtney from across the bay in St. Petersburg, Florida. Accompanying Courtney was violinist Nick Ewing, keyboardist Micha Neubauer, drummer Sean Bucheck, and bassist Jordan Tellone. Courtney released his first EP Mother Moon, and played the Orlando show the night before as well as the current show promoting the release. Courtney started his own band at the age of eleven, and has since then shared the stage with major names such as Switchfoot, Vance Joy, X Ambassadors, Meg Myers, The Mowglis, and many more. Courtney also appeared on the last season of American Idol with which he was given a special on TV making it to Hollywood. Courtney has toured in almost every major continent and country in the world.

As the lights dimmed, Courtney and his companions took to the stage. Opening up his set with “Somewhere Else”, and immediately captivating the crowd. With a small break in his song, the crowd already erupted into an enormous applause, and he quickly continued the song, with the crowd going silent almost instantly. Finishing out his song, the crowd jeered in excitement as Courtney smiled off to them. He then started into this second number, “Coral Reef”, with members of the crowd slowly swaying and dancing to the rhythm. Off to the side, Ewing and Neubauer played alongside each other, with Neubacher’s keys ringing out and Ewing’s ethereal notes echoing in the venue. Sticking to the mic, Courtney beautifully played out each note on his guitar, with this soothing voice ringing out in the venue. Courtney moved between the mic and playing alongside Bucheck, and even moving close to Tellone, holding their instruments together and playing out a beautiful duo of guitar and bass. Courtney later moved onto “Wes Anderson” before closing out his set and taking off the stage, later to be found hanging out by his merch table signing copies of his records and hanging out with fans.

Click here for photos of Milky Chance at Webster Hall in New York, NY on March 31st, 2015 in the QRO Concert Photo Gallery

Click here for photos of Milky Chance at SXSW 2015 in Austin, TX in the QRO Concert Photo Gallery

After a small break, and with the crowd packing in more tightly, the stage was reset for the final act. Hailing from Kassel, Germany, alternative rock band Milky Chance was first formed in 2012 when lead vocalist Clemens Rehbein and drummer Phillipp Dausch completed their secondary education at Jacob-Grimm-Schule in Kassel. The band was soon completed with guitarist Antonio Greger in 2015, and later joined by touring member Sebastian Schmidt on drums and percussion. The band released their top single “Stolen Dance” in 2013 on YouTube and Soundcloud, which was included on their debut album Sadnecessary in 2014. Following this release, the band encountered massive amounts of success in their first shows, rocketing them into the music world. The band has then released three more albums; Blossom in 2017, Mind the Moon in 2019, and most recently Trip Tape this year.

As the lights dimmed, the quartet took to the stage under a dim blue glow. Immediately starting into their set, they opened with “Fallen” from Mind the Moon. With tumultuous applause and cheering, the entire crowd took to singing along. Taking precious moments to speak to the crowd, and thanking everyone for their dedication to coming to the show, Rehbein hit every note of their songs with his iconic voice. Moving across the stage, Rehbein would tag up with Greger to play together, combining their notes in a seamless unity. The band played through their set and soon started into their hit single “Stolen Dance”. As their song started, Rehbein pointed to the crowd to sing out the first few lines, and every single voice in the room erupted as they sang along, from the front of the pit all the way up to the balcony. Rehbein then moved into singing the lyrics, finishing out the song with a raucous applause, and heading off the stage. As the crowd cheered, the band soon re-emerged for their encore, finishing out their set with Rehbein and the rest of the members waving out to the crowd, holding his hands in the air along with his fans.

With the show finished, the crowd hung around for a few minutes, sharing their favorite moments from the night, before heading out to the merch table or leaving into the night. Although the show was delayed multiple times, Milky Chance delivered the show every Tampa fan was expecting.