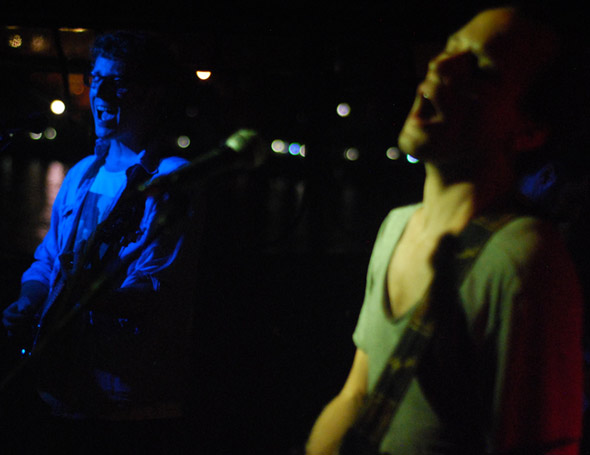 Click here for photos of MiniBoone at 2011 Make Music NY in Brooklyn, NY in the QRO Concert Photo Gallery

Click here for photos of MiniBoone at Pianos in New York, NY on April 25th, 2011 in the QRO Concert Photo Gallery

Click here for photos of MiniBoone at Knitting Factory in Brooklyn, NY on April 14th, 2011 in the QRO Concert Photo Gallery

Click here for photos of MiniBoone at Brooklyn Bowl in Brooklyn, NY on January 26th, 2011 in the QRO Concert Photo Gallery

Going to see a concert on a boat is always a risky proposition.  The sound and light systems usually are something well below par, you can’t avoid hearing all the bands playing if you don’t like any of them, are committed to a chunk of time, have to be there on time, and there’s always the worry about getting seasick.  That, plus the weather (and pirates).  But when MiniBoone is at the captain’s wheel, you’re in safe hands, like on the Half Moon in New York Harbor for Rocks Off Concert Cruises on Tuesday, August 16th.

To be fair, not sure how many of the passengers aboard the Half Moon were unaware of MiniBoone, considering they’re a local band (from Brooklyn, just across the East River from where the Half Moon docks – QRO venue review).  But Atlanta’s Gringo Star (QRO spotlight on) were also on board, making one of their first appearances since signing to New York’s Gigantic Records.  And there’s just the natural draw of a booze cruise – another one was taking off shortly after the Half Moon from the same dock, some sort of gospel or soul performance (it was pretty clear which line was for which boat – white hipsters for one, middle-aged black couples for the other, plus a third line full of people in sport jackets and sweaters, apparently going yachting…). 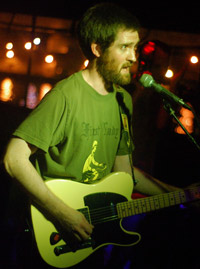 The bow (or is that stern?…) of the Half Moon was full when it took off, but that was as much because there’s not that much other room on the boat for passengers.  There is a downstairs, with tables and chairs (and a bar – plus a buffet…), but it feels odd being on a boat, but with a low roof and limited view – this is not what you left shore for.  But the main upstairs area is where the band sets up & plays – one kind of feels ‘in the way’ when a band is not performing, since an act is usually setting up and/or another is packing up, and the band’s area is one-half of the same floor that the crowd stands on – not even a step up divides them (and if you take the wrong set of stairs, will end up behind the band).

Click here for photos of MiniBoone at CMJ 2010 in New York, NY in the QRO Concert Photo Gallery

Click here for photos of MiniBoone at QRO Mag/Ampeater showcase at 2010 Northside Music Festival in Brooklyn, NY in the QRO Concert Photo Gallery

Click here for photos of MiniBoone at 2010 Make Music NY in Brooklyn, NY in the QRO Concert Photo Gallery

Click here for photos of MiniBoone at QRO Mag/Ampeater showcase at Knitting Factory in Brooklyn, NY on June 3rd, 2010 in the QRO Concert Photo Gallery 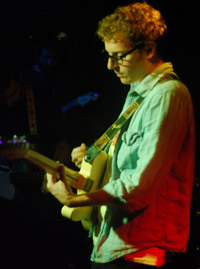 There was still some people wandering during the first act, two-person Your Youth (QRO photos), but Gringo Star (QRO photos) had a healthier crowd – and an unfortunate lighting that seemed to overdo the psychedelic with limited tools, mostly differently colored lights and a smoke machine (and that smoke had a suspicious, familiar, herbal smell…).  The smoke machine was thankfully gone for MiniBoone, though the colored lighting remained – and heavily favored whoever was in the middle of the stage (lots of light on drummer Taylor Gabriels – so much he had to wear shades – but none on bassist Samuel Rich, while it varied on Craig Barnes, James Keary, and Doug Schrashun depending on what they were playing/where they were standing).  The skies turned towards rain, but not heavy, and there was a tent-like roof above the main area, but not for the bow/stern, so only more of the crowd came in for MiniBoone.

The band mixed playing material from their Big Changes EP (QRO review), as well as their upcoming release, and both sides of seven-inch “The Other Summer (QRO mp3 review).  They started the show bombastic as always with “Brand New Thing” and “Devil In Your Eyes”, but there was a halt to the proceedings when tech problems knocked out the in-the-dark keyboards (when a member of the band asks the crowd if anyone has “DI box,” you know they’re in trouble…).  But between the band, the sound guy, and other group’s equipment (not the first time Gringo Star has provided equipment for a band playing after them – QRO coverage), MiniBoone were back on track with “The Other Summer”, its more-than-a-b-side “Fight Song”, and this correspondent’s Big Changes favorite, “Cool Kids Cutout of the Heart Itself”.  New song “Liars & Hiders” showed a more aggressive side to MiniBoone, but then they were up-tropical with “Rosalina Must Dance Alone”.  It all closed with a great rendition of Big Changes closer “Funny Money” as the Half Moon pulled into port (which unfortunately meant no encore). 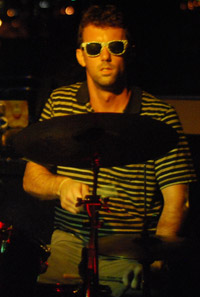 The last time MiniBoone played on a boat, they were nearly caught up in a street fight after another boat let out at the same time, with drunken bridge & tunnel folks creating a scrum that endangered the MiniBoone van (the boys luckily were not part of the fight, and got out of the scene right before the cops arrived).  The streets upon debarking were safer this time, and the passengers of the Half Moon had a spring in their step as they were heading home, thanks to MiniBoone. 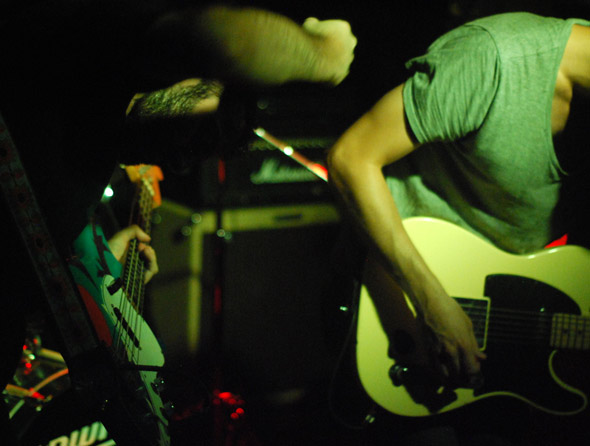 Vacation – “Anything For You”