It was happening, just as advertised.  The mantra that the sixth annual Mission Creek Festival shared with LCD Soundsystem’s swan song (QRO review) was taking shape, reifying itself off of the covers of the free weeklies where it sat beckoning next to likenesses of John Waters, the vaguely creepy, pencil-mustachioed, de facto main attraction of this 2011 edition.  This is happening.

The streets were pretty quiet-it was Monday, true-but rumblings could be felt on March 28th.  From windows, through walls, up from underground, and plastered all over kiosks, there were rumblings.  They sounded from the mouths of locals, showed up in the gait of guests, came off in the novelty of hearing Sonic Youth (QRO live review) on the speakers at an Irish sports bar.

Maybe it’s no coincidence that the Iowa City gathering would come to an end just after LCD Soundsystem graced Madison Square Garden (QRO venue review), or any stage, for the last time.  Of course, Mission Creek will likely be back next year, just as James Murphy will (likely?) be back to headline Coachella 2020.  After accepting the offer from the vacant piano sitting at the east end of the city plaza – “Tickle My Keys”, it beckoned, and it turned out to be a means of making the sunset pouring in from the plaza’s west end all the more cinematic – it was time to head to the Blue Moose Tap House for the first show of the week. 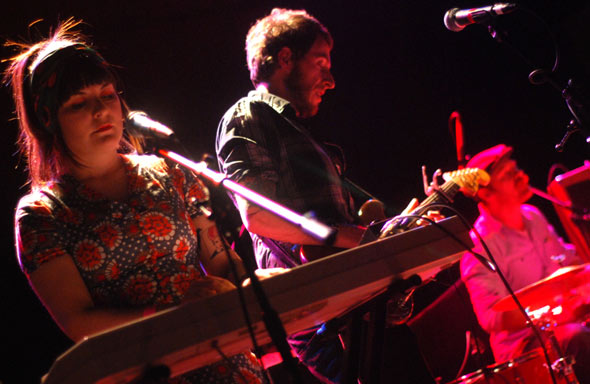 Click here for photos of A Classic Education at Bowery Ballroom in New York, NY on April 21st, 2011 in the QRO Concert Photo Gallery

Coming off like ‘80s U.K. indie-pop via dreamy U.S. ‘60s ballads, openers A Classic Education, featuring four Bolognese instrumentalists backing an Ottawan singer, draped the Blue Moose in starry-eyed reverb a-la Wild Nothing (QRO live review) breezing through the Appleseed Cast’s Two Conversations or early, lo-fi Shins (QRO live review) sticking to the electric guitars.  Their heady blend of swoon-pop was ideal for fest-goers starting the eight-day Mission Creek on light, paced feet that Monday night.  If there were a beach near the exit, some young woozy lover might wander there with “Gone to Sea” spinning in his or her buoyed head, though never mind the total dearth of beaches-with its clear rural skies, Iowa makes stargazing a plentiful harvest, and this mostly Italian quintet supplied the soundtrack.  Frontman Jonathan Clancy introduced the set’s fourth song (new one “Billy’s Gang Dream”) as being “about Billy trying to join a ‘60s Chicago biker gang… this is his test.”  The refrain: “Please don’t go out in the world / Please don’t go playing with fire / Cool now I’ve got to decide / If you are fit for this life.”  As with the rest of the night’s effort, it proved equal parts jaunty and wistful. 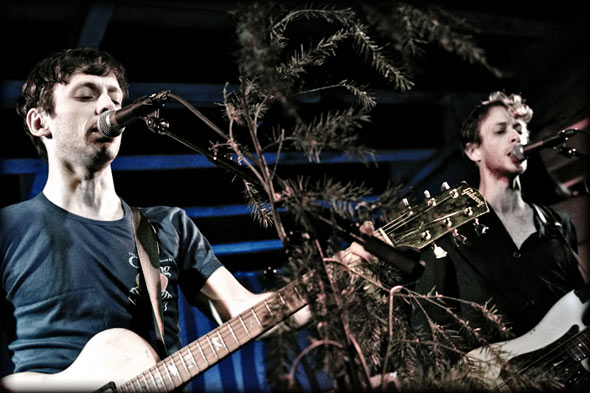 Click here for photos of British Sea Power at Doug Fir Lounge in Portland, OR on April 3rd, 2011 in the QRO Concert Photo Gallery

Click here for photos of British Sea Power at Music Hall of Williamsburg in Brooklyn, NY on March 22nd, 2011 in the QRO Concert Photo Gallery

British Sea Power have been at it for over a decade now and still they remain somewhat unknown and undervalued this side of the Atlantic.  Tonight marked their first-ever foray into Iowa City territory, and they were the first headliners to play a set in this year’s absolutely stacked incarnation of the Mission Creek Festival.  Frontloading the new stuff from the recently released Valhalla Dancehall (QRO review), the Brighton-based sextet broke in with one of the young year’s finest and most quotable rock anthems, “Who’s in Control?” A sample: “Sometimes / I wish / Protesting was sexy on a Saturday night!”

Or on a Monday night, for that matter.  It didn’t seem that many present were terribly familiar with the Sea Power oeuvre, with the exception of the fellow who yelled “Open Season!” after “The Land Beyond” wrapped up, thereby acquainting the rest of the room with the title of the album from whence it came – a curiously maligned, pastoral pop gem the band set adrift in 2005.  “The Land Beyond” showcased the clearest, most tender strains of Abi Fry’s viola, which was otherwise relegated to bit part status by the cloudy house mix.  Brothers Yan (QRO interview) and Hamilton swapped the mic as well as guitar and bass duties, their breathy, almost dashing timbres a big part of BSP’s knack for crafting anthemic songs at once lush and boisterous.  Wood (the original four members adopt a single-name stage-name gimmick) held steady as he pinged away behind the kit, clad in nautical stripes, and role player Phil Sumner, on cornet, keys, and auxiliary guitar, bolstered the widescreen sound to its maximum in the tight upstairs space.

Click here for QRO’s review of British Sea Power at Music Hall of Williamsburg on May 11th, 2008

Lead guitarist Noble commandeered the night.  His melodic depth charges on old favorite “Carrion” sliced through the loudest aural wall of the night, as he made like the Joey Santiago of Yorkshire with his manic, trebly solos.  He climbed things and stood atop them.  He slipped offstage to tear away at his guitar while standing casually amongst patrons who sat and sipped dark drinks.  In truth, he emerged as the other social lubricant in the amiably boozy waters of the Blue Moose Tap House, waters that finally gained a bit of chop after the ‘encore’ (“We’ve already started drinking,” Yan said, and the Blue Moose lacked a backstage, so they just kept playing) kicked off with the pro-immigration bliss-out “Waving Flags”.  The crowd was, lamentably, too thin to surf upon, so during BSP’s raucous, traditional closing jam in the key of A major, Noble sought piggyback rides and jumped a willing photographer, a nearby member of tourmates A Classic Education, and anyone else who was 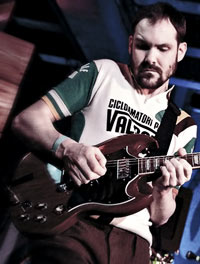 game, as he and his human perch ran around in circles slapping hands with whomever.  Not that anyone was dozing, but Noble’s giddy antics certainly helped rouse the crowd into higher spirits.  And then, as he had before the show, Noble ducked behind the merch table to peddle mugs (“British Tea Power”) and greet the faithful.  As goes the opening line of “Waving Flags”: “You are astronomical / Fans of alcohol / So welcome in.”  Let’s see pub rock get this epic. 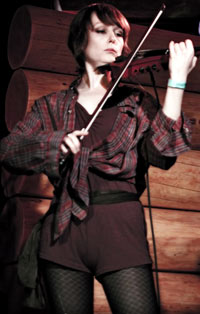 British Sea Power playing “Carrion”/”All In It”/”Rock In A” live at Doug Fir Lounge in Portland, OR six days later:

Today’s final act either sent you to bed feeling lifted or kept you up late feeling high.  Either way: euphoria.  Iowa City being a college town, and Monday being night one of an eight-day (!) festival, it was easy to imagine plenty of U of Iowa undergrads setting themselves up for serious academic damage control come April 5th.  But for the moment, the move was Rubblebucket at Gabe’s Oasis – just around the corner from the Blue Moose – and they were about to make you start kicking all that incumbent bunk with their afro-beat delight.  First for the night, then for the week.

There were eight of them, and each one “Came Out of a Lady” – more specifically, they came from Brooklyn, that perennial hotbed of hipster-dom.  Their Twitter bio suggests Rubblebucket is, “What it sounds like when eight different freak flags fly in unison.”  Could there be a more apt description?  Strutting new material from the forthcoming Omega La La, including the aforementioned first single “Lady”, while showing off the old stuff, best represented by the ecstatic sway and scat singing on “Bikes”, Rubblebucket and its formidable horn section, inventive percussion, vintage organ tone and prominent low end raised it all to full mast.  The sound met somewhere amidst Bow Wow Wow’s “See Jungle”, the Luaka Bop and Daptone rosters, and Lotus.  That is, if Lotus’ instrumental sound was augmented by the presence of a gorgeous and apparently uninhibited frontwoman and saxophonist such as Rubblebucket’s Kalmia Traver.  For sure, Rubblebucket exuded that Remain in Light-era swagger, but there was little of the anxiety or jittery affectation that defined the Talking Heads as much as did their playful side.  This was just joy, deft joy.  Pure swag.

Dim strings of lights pulsated across the Gabe’s ceiling, knotted into a web – it illuminated the freaky dancin’ below and helped set the mood for Rubblebucket’s flavorful performance.  Would they in fact be the breakout stars of the festival, as speculated in the free weeklies?  Mission: Operation Mission Creek had begun.