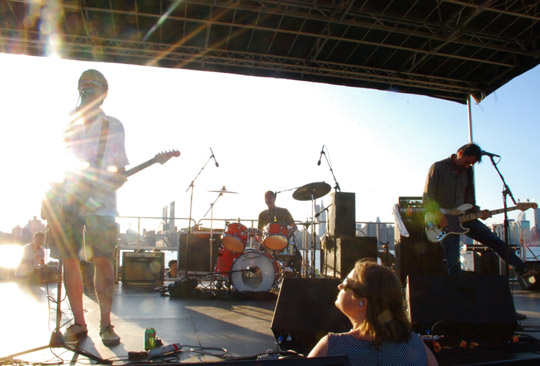 Click here for QRO’s review of Mission of Burma at Music Hall in Williamsburg in Brooklyn, NY on January 18th, 2008

Rock ‘n’ roll, and especially punk rock, is inherently a young man’s game.  It’s all about rebellion (and less about skill…), about playing loud & fast & hard.  None of those things scream ‘elder statesman’, and many veteran punk rockers, as they’ve gotten on in years, have either mellowed or embarrassed themselves by trying to cling to their youth (or worse, ‘reinvent themselves’).  However, the venerable Mission of Burma belied all of that when they dominated the first Pool Party of the summer, now at Williamsburg Waterfront (QRO venue review) in Brooklyn, NY, on Sunday, July 12th. 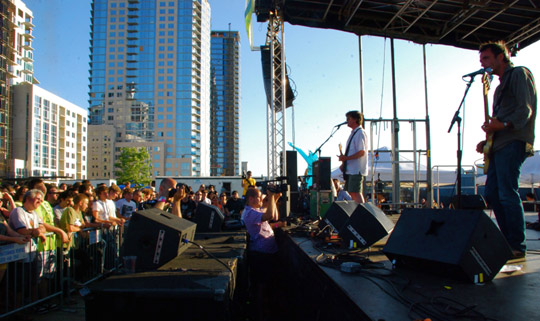 Click here for QRO’s review of Mission of Burma at Irving Plaza in New York, NY on January 19th, 2007

The Pool Parties (QRO Festival Guide) at McCarren Park Pool (QRO venue review) had always been living on borrowed time, as the defunct WPA-era community pool had been approved for rehabilitation into a venue only so as to make enough money to pay for it to become a community pool once again, and unfortunately not even the worldwide economic collapse stopped 2008 from being the final year for the excellent – and totally free – Pool Parties.  But Jelly NYC, the people behind the Pool Parties, persevered in keeping the dream alive, shifting the whole thing a few blocks south and a few blocks west to Williamsburg Waterfront.  It was a close-run thing: the schedule was announced very late, and word is Albany was dragging its feet (no big surprise there, considering they don’t even know who’s the State Senate Majority Leader…), but it all came together in time for the first big show, headlined by Mission of Burma. 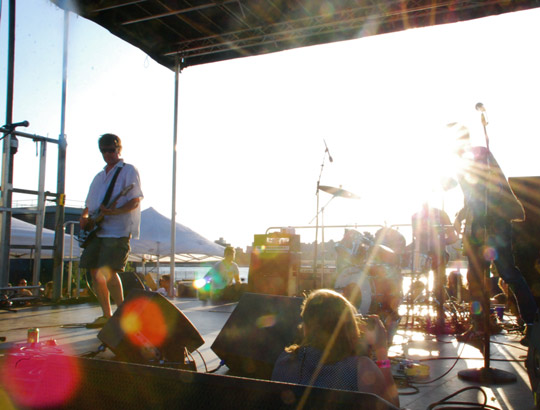 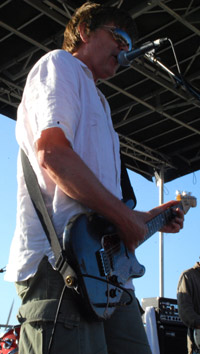 Art-punk legends, Burma only lasted four years, 1979-1983, when singer/guitarist Roger Miller’s tinnitus forced their dissolution, but not before giving classics like The Horrible Truth About Burma and “That’s When I Reached For My Revolver”.  They were known not just for their (sometimes) amazing live shows (the hit-or-miss quality was the actual ‘horrible truth about Burma’…), but also for early employing of tape loops – not just on record, but live, thanks to Martin Swope.  Miller, singer/bassist Clint Conley, and drummer Peter Prescott reunited in 2002 (with new tape-loopist Bob Weston, though he actually still uses early-eighties tape-loop tech, like what Swope used), presaging the alt-rock reunions of more famous acts like The Pixies or Dinosaur Jr. (QRO live review).  Mission of Burma is now coming out with their third new post-reunion, The Sound, The Speed, The Light, this October, and previewed it, along with some old (and old) material at Williamsburg Waterfront. 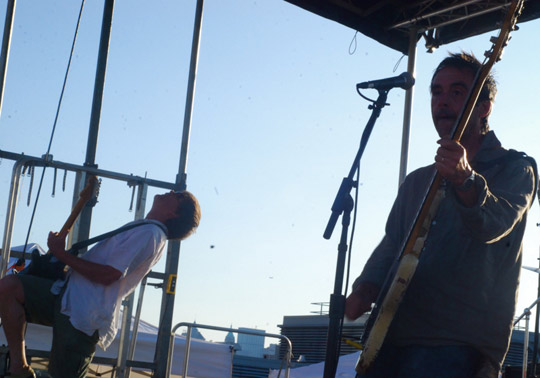 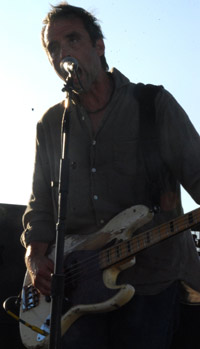 The first Pool Party opened doors at 2:00 PM, and you didn’t have to be as old as Conley’s mother (in attendance – QRO photo) to be worn out by the time Burma took the stage.  There were three bands before the Mission, all young, all loud, and all unimpressive: the garage-rock of Jemina Pearl (QRO photos), formerly of the now-defunct Be Your Own Pet, whose guitarist was seemingly unable to tune his instrument, the noise-rock of Ponytail (QRO photos), who played too long, and screaming of Fucked Up (QRO photos), whose frontman was funny and engaging with the crowd (reminiscent of Tim Harrington of Les Savy Fav – QRO photos), but their music, nothing special.  The sun was beating down (though there was a nice, constant breeze off the East River), there was no Slip ‘n’ Slide (though there was dodgeball, refereed by a guy in a Captain America outfit, like an extra from a Flaming Lips show – QRO review), and security was a bit tight (including park cops, Williamsburg Waterfront being a state park) – it all could have been a downer. 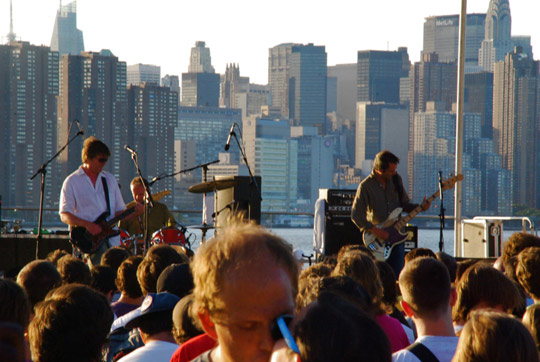 But then the old folks showed the kids how it’s done.  It started with a parade of government officials, the people who actually approved the Pool Parties, capped by an awesomely funny speech by Brooklyn Borough President Marty Markowitz (QRO photo), who first pitied people who lived in that “outer borough” of Manhattan (which the Waterfront looks out onto), then read a speech (written by a younger speechwriter) praising “the longest-named festival ever, ‘Jelly NYC Presents: Pool Parties at Williamsburg Waterfront’” (or something), made up almost entirely of the names of Mission of Burma songs, saying such lines as “We’ll have ‘1001 Pleasant Dreams’ in this ‘Playland’…” – hopefully the kids in attendance knew Burma’s hiatused songography.  Markowitz even joked that he couldn’t say the name of the band before, “F’ed Up” (one of Albany’s sticking points was that a band named ‘Fucked Up’ was playing, even after Jelly listed them as ‘F***ed Up’ – didn’t ‘Fuck Buttons’ play the Pool Parties last year?… – QRO photos).  There’s a reason Brooklyn is hipster-central… 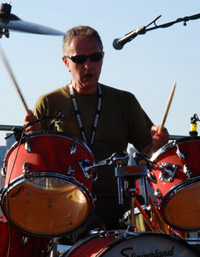 But there is nothing hipster about Mission of Burma.  Famously ‘too punk for art-rockers, and too art for punk-rockers’, Burma was the musical model other punk rock acts took when they got more experienced & more complicated, like Hüsker Dü (QRO spotlight on) or Sonic Youth (QRO live review).  Conley’s a little more art, Miller’s a little more punk, Prescott’s just funny (“We’re gonna play some more new songs now – ‘new’ as in, after 1982…”), and Weston’s invisible (seriously, he was impossible to find…); it all adds up very well.  Live, outdoors, and with the tape-looping, it was a bit hard to get a read on most of the many The Sound pieces they debuted, though opener “1 2 3 Party!” was a crazy explosion.  But they also hit up ‘new’ old tracks from 2006’s The Obliterati (though interesting none from 2004’s first reunion record, ONoffON), like “2wice”, the aforementioned “1001 Pleasant Dreams”, and “Spider’s Web”, as well as ‘old’ old classics like “Red”, “Mica”, and “That’s When I Reached For My Revolver” – returning for an encore of the always-excellent “This Is Not a Photograph”.

Mission of Burma playing “That’s When I Reached For My Revolver” live at Williamsburg Waterfront in Brooklyn, NY on July 12th, 2009:

Fucked Up had joked that their last show had been in Serbia, opening for Korn, and “One of those two bands, Mission of Burma & Korn, have influenced us – guess which one…”, but it was hard to see any Burmese influence.  Burma did do the headliner’s duty of thanking all the openers, but also specifically told people to check out the superior, and far more interesting, Future of the Left (who are playing less than a week later, at The Village Voice’s Siren Music Festival – QRO preview) – okay, FoL are on the same label as Burma, Matador, but so is Fucked Up (and another Matador alum, Georgia Hubley of Yo La Tengo – QRO live review – was in the crowd – QRO photo – taking it in before Tengo opened up for Wilco the next day, outdoors at KeySpan Ballpark down on Coney Island – QRO event listing).  The Pool Parties might be there for the kids, but it was the adults who made sure the first was a good time. 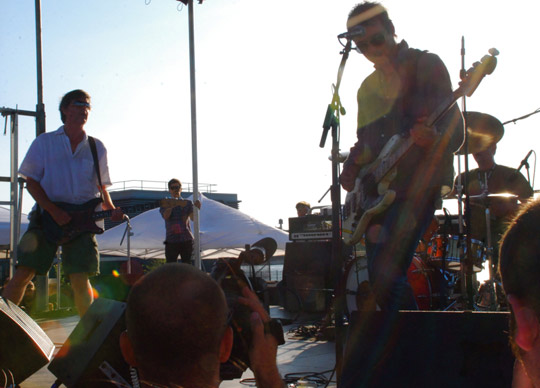