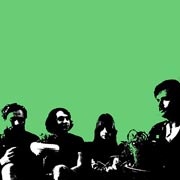 New Hampshire has always had the reputation of being the conservative yin to the liberal yang of Vermont.  Mostly known for biker conventions, NASCAR, and Mt. Washington, you hardly ever see the state make the tour itinerary of an indie band.  Sad but true.  All the more edifying, then, that the Granite Staters finally have an indie darling to call their own: MMOSS.  It’s probably pushing the point too far to say that MMOSS captures the previously uncaptured indie soul of the state; it’s enough to say the three-piece gloms onto the flower power heritage that runs rife all through New England.  Back in the ‘60s all the northeastern acidheads ditched the cities for a more countrified life.  The ones in upstate New York got artsy; the ones in Vermont got groovy; and the ones in New Hampshire got wicked paranoid, put up chain link fence, bred vicious guard dogs, and switched over to meth.  Artsy, groovy, paranoid: MMOSS is all three, woven into an acoustic folk tradition with a touch of the medieval.

Sources report that i was a long time in the making.  That’s sometimes the case for albums with this much attention given to vocal arrangements.  MMOSS strikes some Mammas and the Pappas harmonies to pitch perfect effect on songs like "grow down" and "woolgathering".  A retro effort a-la Drug Rug (QRO live review) or Quilt.  The amount of effort involved in nailing vocals like this is almost like recording a second album on top of the instrumental tracks.  But the effort was worthwhile; the vocals give the album some of its nostalgic appeal, bringing you back to a time when groovy ensembles could get signed with little more than a tambourine and some attitude.  More maximalist medieval folk numbers like "come what may" and The Doors-esque psychedelic show closer "and i do set my bow in the clouds" tread into darker territory, the far side of a bad trip.

At the other end of the spectrum are the brighter, fuzzier pop jingles of "molly molasses" and "hedge creeper".  Thrashing acoustic chords and flute knock out straight up, danceable numbers reminiscent of another New England throwback, Thick Shakes (QRO album review).  MMOSS could have put together an entire album of these chippier songs and saved the mind-bending psychedelic blowouts for the live show.  But i includes both, plus instrumental asides like "part one" and "bow down", and it says a good deal about the band’s ambitions for the album.  There’s a sense of the epic here, a journey from the familiar to the strange, and back again.  That’s probably the hippie heritage muscling it’s way into the picture, and it works.  Clocking in at only 48 minutes, i feels like a much bigger album.  In today’s what-have-you-blogged-for- me-lately internet culture, MMOSS’ approach is pretty refreshing.  A lot of love went into i, as an organic whole instead of a collection of mp3s.  Here’s to hoping the public at large catches on to a pretty great record.