<img src="http://www.qromag.com/wp-content/uploads/2011/05/mogwaimay5.jpg" alt="Mogwai : Live" />Where you play makes a considerable difference for a touring band.<span>  </span>And it was obvious that the members of Mogwai were more than... 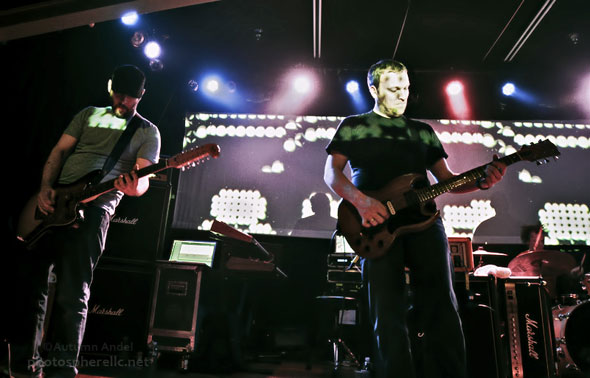 Where you play makes a considerable difference for a touring band.  And it was obvious that the members of Mogwai were more than happy to play in Portland.  Though the show happened to fall on the same day as the Stumptown’s popular and trendy ‘First Thursday’ gallery event and the opening night of Cinco de Mayo celebration in downtown, people flocked to the east side to catch the religious experience that is Mogwai.  But then again their last stop was in Salt Lake City – when Stuart Braithwaite (guitar/bass) mentioned this fact, the crowd laughed and booed in sympathy at the implication.  Though the performers and the audience reside a half a world apart, seem to stand on a common ground with their insight.

Opening for Mogwai is not an easy task.  But Errors, who are signed to the headliner’s label, Rock Action Records, dazzled the crowd.  With undeniable influence of their fellow countrymen, the quartet recalls the familiar majestic progression of Mogwai with electronic beat sensibilities of Holy Fuck (QRO live review) to fuse their post electro rock.  Though it was impossible to decipher every word that came out of Simon Ward’s mouth, one understood their appreciation for a great first encounter with Portland.  Their eight-song set lasted about quarter of an hour and kept the Mogwai fans buoyant with cheers.

Mogwai playing “Mexican Grand Prix” live at Wonder Ballroom in Portland, OR on May 5th, 2011: 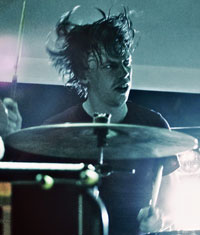 The 15-song, hour and half set showcased Mogwai’s ability to oscillate and amalgamate shredding guitar riffs, computer generated sounds, and gloomy piano chords to produce music that is fragile and powerful at the same time.  Playing seven songs off their seventh studio LP, Hardcore Will Never Die, But You Will (QRO review), presented a less coruscating set where the earplugs were less essential as some of their past shows.  As usual, the set opened with “White Noise” – a melodic instrumental that gradually crescendos into Mogwai’s trademark thundering climax.  As one of the most accessible albums of their catalog, songs like “Mexican Grand Prix” and “George Square Thatcher Death Party” with processed vocals of Barry Burns, set against fervent drumming had everyone bobbing their heads involuntarily.  For unspecified reasons, drummer Martin Bulloch was missing from the quintet.  Luckily James Hamilton from Errors filled the post nicely, pounding away like it was the last day of his life, yet exposing beaming smiles in between songs.  His liveliness contrasted to the mostly inert band, except for Braithwaite, who undulated with his guitar or bass.

Visual projection accompanied few of the songs from the Glasgow-based band’s latest album.  While “Mexican Grand Prix” and “Death Rays” were played against roaming geometrical shapes, “You’re Lionel Richie” displayed time-lapse of cityscapes, which gave paradoxical poignancy to the track that begins gently with shimmering guitar riffs, gradually revealing the tormented beast within to a deafening explosion.  In case you didn’t know, the song titles are totally arbitrary.

Mogwai playing “Death Rays” live at Wonder Ballroom in Portland, OR on May 5th, 2011:

Introspective tracks like “Killing All the Flies” and “I Know You Are But What Am I?” from 2003’s Happy Songs for Happy People, filled in the gaps left from the new material.  Braithwaite sat with his bass for the hypnotically lush and tragic “Helicon 1” from 1997’s compilation album, Ten Rapid.  Making sure the set ended with a bang, the band treated the audience with the harmonically cacophonous and serenely mournful “Mogwai Fear Satan” from their debut album, Mogwai Young Team.  The 16:19 album version shaved off about four minutes, but still no less majestic.

Mogwai playing “You’re Lionel Richie” live at Wonder Ballroom in Portland, OR on May 5th, 2011:

After less than five minutes, Mogwai returned to the stage in smashing spirits.  First song of the encore was from the piano-driven “Auto Rock” from 2006’s Mr. Beast.  Before launching into one of the singles off Hardcore Will Never Die, But You Will, Braithwaite announced that they’re going to play “Rano Pano” but because keyboards broken, Barry Burns was taking up bass for the occasion.  With heavy guitar distortion feeding off the myriad of effects pedals laid out in front of the stage, the song brimmed to metal shoegaze territory.  These two tracks were strategically placed to prepare the audience for the final crescendo of the night – returning to one of their favorite albums, Mr. Beast, “Glasgow Mega-Snake” has been the favorite closer for several dates on this tour.

Mogwai playing “Auto Rock” live at Wonder Ballroom in Portland, OR on May 5th, 2011:

Few bands elicit worship from their followers like Mogwai.  Often spotted were people with closed eyes, swaying as if they were in trance.  Love was the most frequently used word of the night.  On countless occasion, “I love you!” was shouted out.  At one point, someone uttered, “I love you too!” then someone else blurted, “I love you four!”  And the Scots thanked the audience with smiles.

Mogwai playing “Rano Pano” live at Wonder Ballroom in Portland, OR on May 5th, 2011:

Mogwai has managed to avoid the pitfalls of music fads in their decade and half-old career, and consistently produce material for the critics as well as their listeners to look forward to.  They are well on their way, if not already in the league with their idols  – i.e. Pixies (QRO live review).

Mogwai playing “Glasgow Mega-Snake” live at Wonder Ballroom in Portland, OR on May 5th, 2011: 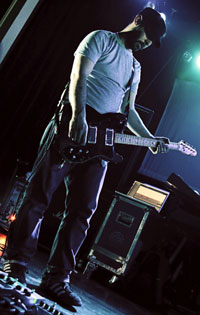 [on a risible side note as a photographer who makes a habit of photographing the set list, when the crew originally plastered the set lists around the stage, it was a neatly typed twelve-song list.  Then few minutes later, a bloke came out with a marker filling in the three-song encore, and crossing out “(How To Be a) Werewolf” and wrote “Ithaca”.  Then the guy returned again to cross out “Hunted By a Freak” and illegibly wrote “(Rano)Pano”] 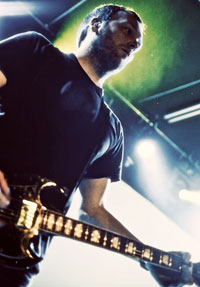