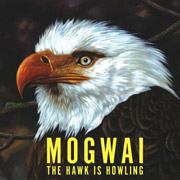 Glaswegians Mogwai seem out of energy, riffs, or both on The Hawk Is Howling.  They mostly rehash old concepts that were better executed the first time.  None of the songs here are bad, but many are dull.  As on previous albums, Mogwai often build tracks by gradually introducing repetitive guitar, bass, and keyboard voices, thus developing the pieces harmonically and dynamically.  This worked well for them in the past, but here they’ve come up with their weakest bunch of riffs yet.  That means trouble for the most formulaic pieces, as adding and subtracting dull parts neither builds nor releases tension.  This lack of tension is worst in “I Love You, I’m Going To Blow Up Your School”, in which after six and a half minutes of shy guitar playing, the Big Distorted Climax sounds both inevitable and inappropriate.

The dullness isn’t just the fault of weak riffs, though; the rhythm section is extremely uncreative on this album.  Mogwai’s dynamics and tonal palette present the drummer a challenge, and Martin Bulloch’s willingness to meet it has always been erratic.  Sometimes he comes up with great, pitch-perfect beats, as on “Mogwai Fear Satan” from Young Team, and sometimes he’s content to play a gentle four beat as chaos unfolds around him.  He mostly takes the simpler road here, and it doesn’t help songs that have little else of interest going on.

There are a few solid tracks.  The best one, “Batcat” starts full-on, much like “Glasgow Mega-snake” off 2006’s Mr. Beast.  It’s got a few good things most of the other tracks don’t: mean riffs, an inspired narrative, growling bass tone, and hard drumming.  The band tears it up toward the end, as if the intensity missing from the rest of the album collected in that second cut.  “Batcat”-caliber interplay helps the band along elsewhere, though it’s not just guitars.  The chorus of “Danphe and the Brain” has a neat call-and-response thing going on between guitar and what sounds like a vibraphone.  “Scotland’s Shame” artfully pits guitars and keyboards – maybe organs – against each other, letting the latter have the first and last word.  And “Kings Meadow” approaches interplay in a totally different manner, recalling the last For Carnation album.  A gentle, repeating guitar melody is set against a stream of jingling electronic or percussive tones that seem to exist in a different world from the rest of the song, as if they unwittingly sat down to record a guitar and piano piece in a windchime factory.

The band also takes a stab Trans Am-ward in “The Sun Smells Too Loud”, and they sound like they’re having fun.  It’s not a exceptional tune, but after a few listens through The Hawk is Howling, the most appealing tracks are the energetic ones and the original ones.  Six full-length albums in, Mogwai still has legs and ideas, if not enough to fill an album two and a half years after their last.