If we are to believe, then the truth must be inspirational, creative and above all totally at ease with all the love we are prepared to invest.... 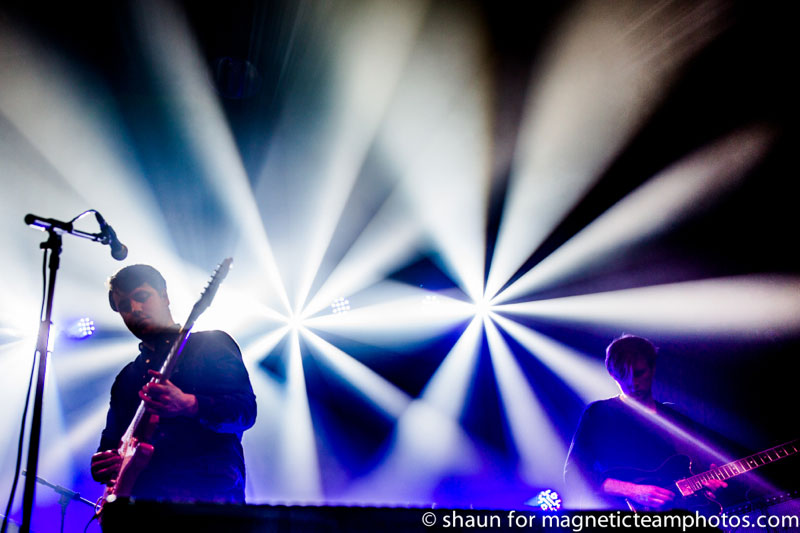 Click here for QRO’s review of MONEY at The Corner in Nottingham, U.K. on November 15th, 2013

If we are to believe, then the truth must be inspirational, creative and above all totally at ease with all the love we are prepared to invest.  “MONEY” is probably the worst name possible for a band that deals in love and honesty to the extent that they do; with the aura created by the group being a vast cosmos away from the lure and pursuit of the filthy lucre.  The four members of this Manchester-based outfit are on the verge of well-deserved greatness and this was their only appearance as the headline act before a summer of festivals, and a tour supporting Wild Beasts.  If musical performance still has the capacity to feel like an event then this was definitely one of them on Thursday, February 20th at Heaven in London.

Last November QRO caught MONEY live in a small venue in Nottingham (QRO review) and although the promotional duties for the debut album have been quite sporadic since, the fan base seemed to have grown exponentially, and a large proportion of young females were in evidence.  The celebratory air was also heavy with expectance; bands that are prone to discuss the sacred essence of their music must produce something that is pure in spirit and is also a unique amalgam of ideas that move the mind as well as the libido.  The night opened with a mini series of piano ballads, with a single ultra bright cascade of lasers illuminating Jamie Lee at the keyboard.  The grandiose ethereal pop of “Blue Bell Fields” was the anthem of the evening, and as a performance we felt the depth of gravitas that again we expect rather than are thankful for.

In this era of multimedia over load, music websites are proliferating in all the genres and 10/10 scores seem to be de-rigueur.  “Shadow of Heaven” when released a little over six months ago seemed to have polarised opinion like no other, with comments ranging from “thoughtful” and “exquisite” to “self indulgent” and “ponderous”.  Polarisation usually occurs when the band makes bold claims and are outspoken over their path and ambition.  One review mentioned a comparison with “Storm In Heaven” by The Verve whereby on its release Richard Ashcroft claimed the music gave him cerebral as well as physical flight, as it was so powerful.  We need these mavericks; they remind us that artists are prepared to go all the way or lose face by only peeking at the possibilities to explore.  It could mean mockery or isolation, but isolation gives them the opportunity to excel whilst all the others are merely a test of their endurance.  Lee certainly has the frontman persona and his claims that the music is more than a wave in the ether and that his personal quotes on his sexuality and attitudes to the band are valid, and are to be admired.  This doesn’t mean that he needs to carve “4 REAL” slogans in his arm to authenticate his art but as these questions are raised, then with the big claims come the big responsibilities.  MONEY at the end of the day only needed their songs, and in Heaven we heard the angels sing and play as if their life and truth depended on them.