Australia’s alternative/indie rockers Monks of Mellonwah have achieved a formidable amount of accomplishments in such little time.  The band recently picked up the award for ‘Best International Act’ at... 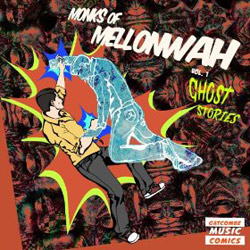 Australia’s alternative/indie rockers Monks of Mellonwah have achieved a formidable amount of accomplishments in such little time.  The band recently picked up the award for ‘Best International Act’ at the 2012 LA Music awards.  Following the recent award, the band has began to release its first full-length LP, and will do so through the separate release of three EPs, beginning with Ghost Stories EP.

Similar to the band’s fellow A&R Worldwide labelmates Muse, Monks of Mellonwah find their sounds strongly influenced by several guitar-dominated classic rock icons.  The EP’s A-side, consisting of both the album introduction and the eponymous track, captures the band’s alternative themes, with combining repetitive yet mesmerizing guitar riffs alongside harmonious vocals.  “Turning and burning / The apple doesn’t fall far from the tree,” the seemingly distant vocals of the chorus transition between the light, melodic guitar patterns to distortion-powered chords and a hair-bending outro that could leave Monks of Mellonwah’s musical predecessors impressed.

“Vanity” and “Sailing Stones”, the remaining tracks on the EP drive home the band’s alternative influence.  “Vanity”, consisting of the choice combination of damped chords followed by an unbounded, wild guitar riff alongside muffled vocals, showcases the band’s appreciation of dynamics.  The cool lyrics of vocalist Vikram Kaushnik ride alongside the staccato upbeat rhythms.  Closing track “Sailing Stones”, from the start of the song, brings to mind Pearl Jam’s “Even Flow”.  Kaushik resembles Eddie Vedder’s auditory style almost perfectly.  Although the styles seem almost perfectly in sync, this definitely isn’t Pearl Jam.  While “Even Flow” almost seems unchained and blood lustful, “Sailing Stones” demonstrates the band’s mastery of harmony and melodies, bringing what could simply be auditory mounds of distortion into an intricate and thought-provoking work.

Although Monks of Mellonwah is currently touring in the land down under, the band still keeps its international audience members on their toes.  The band’s recent release of the video to “Ghost Stories” is only one of the many treats it has in store, and as its website mischievously announces to viewers, “more tour dates TBA,” as well as the remaining two EPs to complete the band’s LP.  For now amuse your ears with the band’s teaser Ghost Stories.

Stream “Ghost Stories” and watch the video below: