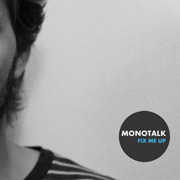 Tired of the real Radiohead and hungering for a cheap Israeli knockoff?  Been in a coma for a while?  Hearing impaired?  If you answered ‘yes’ to any of the above questions, then Monotalk may be the band for you.  In their recent release Fix Me Up, Monotalk does to Radiohead (QRO album review) what elevators do to jazz.

That’s not to say the band doesn’t show ability.  Monotalk have a certain mastery over the art of the electric lullaby.  The pitter-patter of drums, angelic synth, and intricate guitar melodies weave together into a matrix of post Kid A-topia.  It’s sometimes hard to draw the line between loving apprenticeship and lazy forgery, but not in the case of Fix Me Up.  The aesthetic impact is like that of hearing your favorite song covered by a Christian rock band: waves of nausea, revulsion, bile.

The real albatross hanging around the neck of Monotalk is the lead vocalist Israel Erez.  He sounds kind of like (you guessed it) Thom Yorke.  But not really.  To his credit, Mr. Erez does not reach for some of the more astronomical heights that have become Thom Yorke’s calling card; instead, he keeps it in the laidback, resigned and muttering Thom zone.  A wise decision.  Unfortunately it is too little, too late.  Songs like "The Story of a Crazy Man" and "I’ve Missed the Train to Nowhere" will suck your soul out through your ear holes.

The real tragedy of Monotalk and Fix Me Up, however, is not this or that song.  It’s that some people will listen to this music and truly not understand how second rate it is.  Thousands of innocent Israeli boys and girls running about with Monotalk blasting in their headphones, with Monotalk posters on the wall, with the Monotalk logo scribbled over their schoolbags, have been implicated in a travesty not of their doing.  President Obama, this is the real crisis in the Middle East.

Julian Casablancas : Phrazes for the Young