It has been a hundred years since last year, since everything shut down. We’ve all missed so much, from family vacations to music festivals. You desperately need a break,... 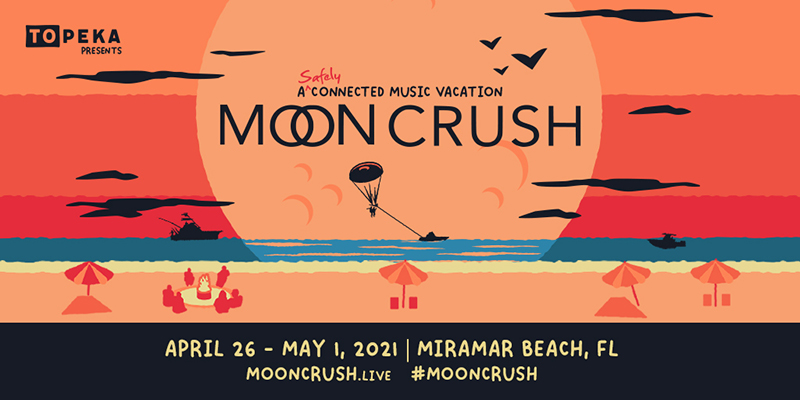 It has been a hundred years since last year, since everything shut down. We’ve all missed so much, from family vacations to music festivals. You desperately need a break, need to get away, and so Moon Crush is here for you. April 25th to May 1st in Miramar Beach, Florida, Moon Crush is safe & socially distanced getaway with yoga, fishing, golf, bonfires, lots & lots of great food, and what QRO cares most about: The Music.

New Orleans seven-piece Americana rock band The Revivalists (QRO photos at a festival) have been reviving N’Orleans rock in such hit singles as platinum “Wish I Knew You” and “All My Friends”. Look for all their friends to shimmy over on the Gulf Coast to Florida to catch their return to the festival stage (QRO photos at a Florida festival).

Samantha Bowers, a.k.a. Sammy Rae, brings her friends & good times to Moon Crush behind such recent EPs as The Good Life and Let’s Throw a Party.

South Carolina’s NEEDTOBREATHE (QRO interview) began on the Christian music charts but have since moved to rock with 2011’s The Reckoning (QRO review), 2014’s Rivers In the Wasteland (QRO review), 2016’s Hard Love, and last year’s Out of Body – as well as opening for Taylor Swift along the way (QRO photos) to becoming a major draw (QRO live review) in their own right (QRO spotlight on).

The Fader once called Margo Price (QRO photos a festival) “country’s next star,” and she’s become it, winning the Grammy for ‘Best New Artist’ in 2019. There’s not a better place to find that out than at Moon Crush (QRO photos at a Caribbean festival), which she comes to after last year’s acclaimed hit album That’s How Rumors Get Started.

You already know hit singer Sheryl Crow (QRO photos outdoors). She’s mixed country, pop, and rock to become a Top 40 mainstay for far more years than most women in music are allowed. She’s racked up Grammy nominations & wins, appeared on everything from Cop Rock to 30 Rock, worked with everyone from Michael Jackson to Kid Rock to Dolly Parton (QRO photos with Parton & more at a festival). She (QRO photos outdoors) comes to Moon Crush (QRO photos outdoors) behind 2019’s Threads.

After meeting at the prestigious New England Conservatory of Music (QRO photos at a Boston festival), jazz-soul outfit Lake Street Dive (QRO photos outdoors) have been bringing pop-soul to modern times. They come to Moon Crush (QRO photos at a festival) behind this year’s Obviously (QRO review).

The War and Treaty

One of the biggest & best names in today’s alt-country, Jason Isbell & The 400 Unit (QRO photos at a festival) bring all the best of his home of Nashville (QRO photos in Nashville). Last year saw Isbell release his excellent Reunions (QRO review), as well as the powerful duet with wife Amanda Shires, “The Problem” (QRO review). He’s also one of the best music follows on Twitter, so be ready for great banter between great songs.