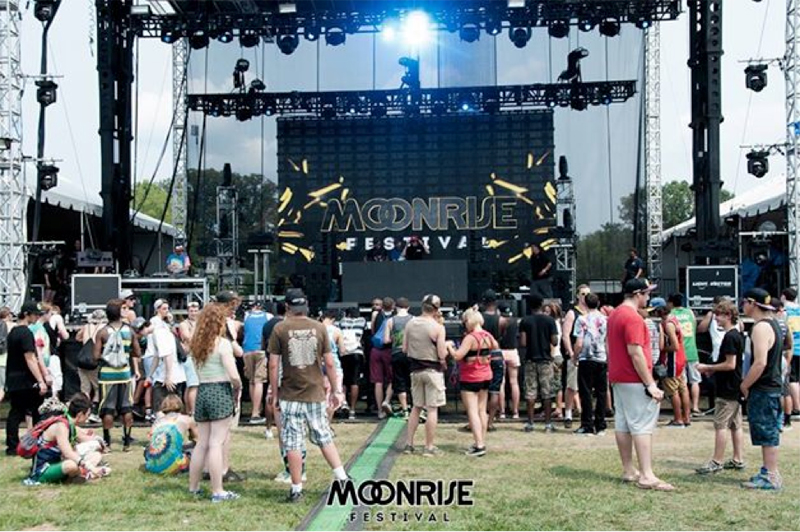 Baltimore’s Pimlico Racetrack was bustling with whomps and wubbles for Moonrise Festival’s successful debut last weekend, August 9th & 10th. The two-day lineup called for a particularly EDM-centric festival, but Moonrise Festival proved to be a vibrant and surprisingly dynamic event this year.

After going through a very thorough security check (the shoes and socks had to come off), the crowd was led through a short underground passageway that led to the festival. While the grounds were a little bigger than expected, it wasn’t exactly appealing to the eyes – essentially it was just a collection of stages with a Ferris wheel in the background. But don’t let appearances fool you. The primary focus of a music festival is the music, and while Moonrise may have been rusty in some areas, but the solid lineup and performances made this festival an event well worth the hype. 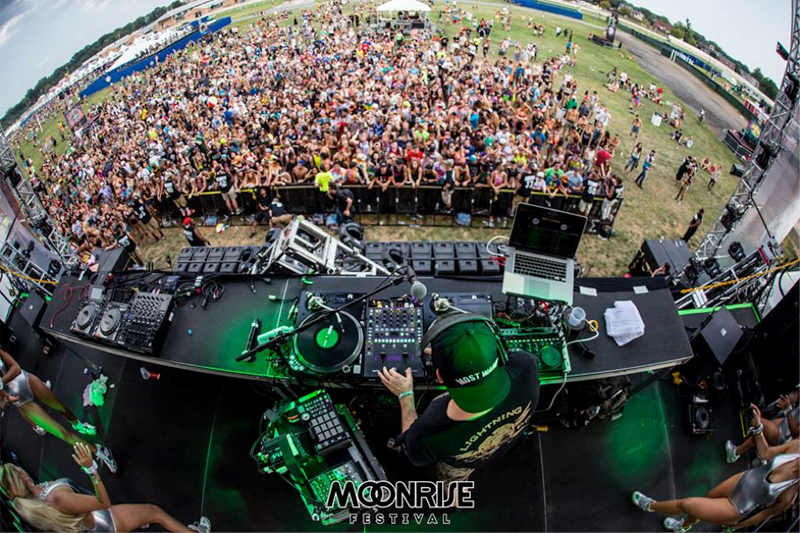 The racetrack was littered with glittery thongs and burn-holes-through-your-eyes-neon attire as Pennsylvania based producer MitiS played on the Lunar Stage. Playing familiar songs like “Born” and new tracks from his 2014 EP, Touch, Joe Torre’s heart melting melodies combined with uplifting bass lines inspired the crowd to move non-stop despite the harsh midday heat. Following suit, Sound Remedy played a slew of melodic house and trap at the Lunar Stage, including popular songs like “Chiaroscuro” and “Liberation.” Later, L.A.-based house act Clockwork was featured on at the Solar Dance Tent. The sweaty, packed tent made it clear that Clockwork was no longer seen as “RL Grime’s alter-ego” – it built an enormous, solid fan base that sought after its distinct, big-room house style. 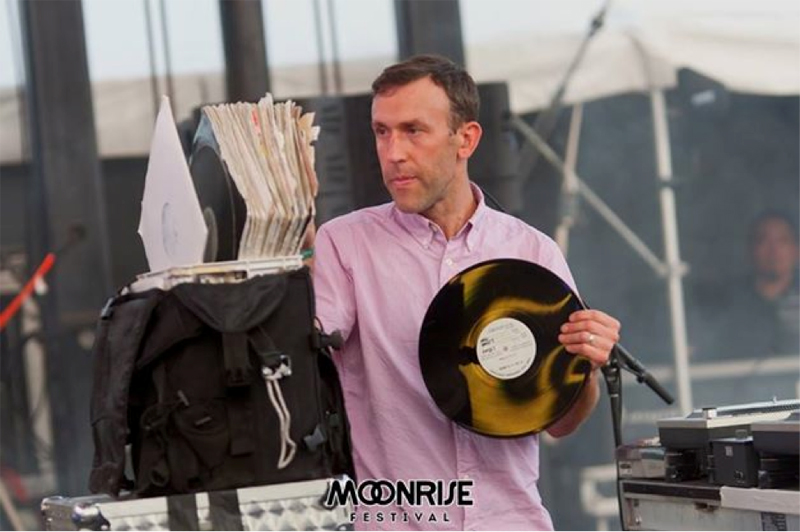 Hip-hop producer RJD2 laterperformed one of the best sets of the day, busily shuffling through his vinyl stack while performing songs like “Ghostwriter”, “A Beautiful Mine” and “Milk Tooth” After a full day of listening to button-pushing DJs, was refreshing to see an act that approached the live electronic music scene in a more organic manner. Next, Infected Mushroom intensified the Lunar Stage with their trashing middle-eastern psytrance. The five-piece band practically attacked the crowd with their pulse-raising songs, including the appropriately titled, “I am Going Insane” and their heavy version of Beastie Boys “Sabotage”. 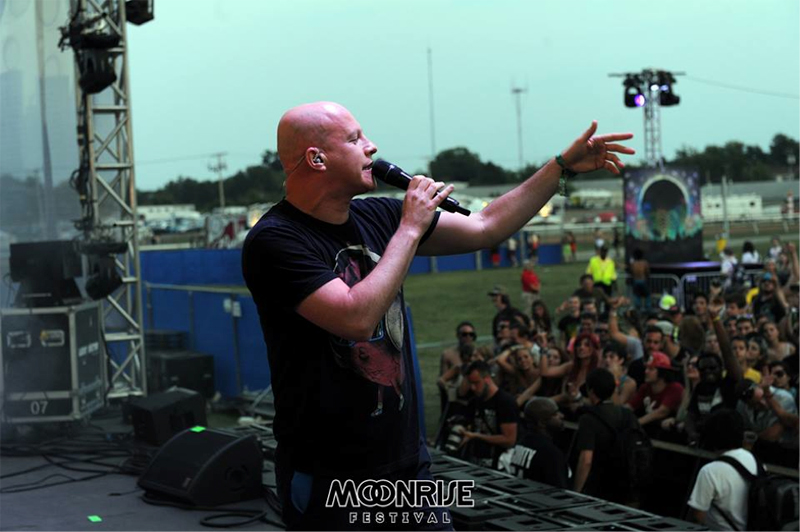 The jamtronica band STS9 closed off the first day at the Lunar Stage with another beautiful and unforgettable set. Their unique light show and triangular visuals gave the stage a starship-like appearance, which went perfectly with their extraterrestrial theme. The band played familiar songs like “Moonsocket” and tracks from their EP When the Dust Settles, as well as newer songs like “New Dawn, New Day”. As one of the few jam bands of Moonrise, STS9 did a great job crafting a calming set to finish the chaotic first day. 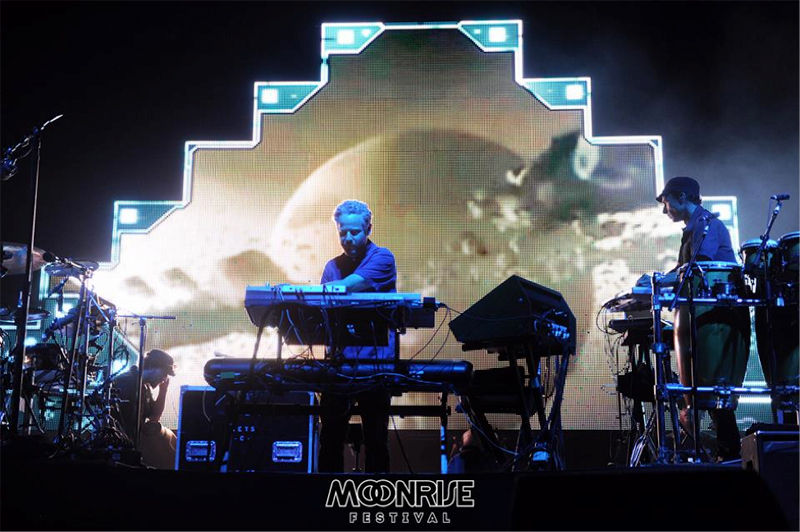 The second day of Moonrise was shaken up with Keys N Krates at the Solar Dance Tent. Best known as a trap act, the trio gave exactly what their fans wanted from their set, not venturing too far from their usual buildups and drops. Up-and-coming producer Anna Lunoe had a late start on the smaller Celestial Garden Stage due to some technical mishaps, but her set was one of the most interesting new encounters of the entire festival. Playing a lively disco set with songs like “I Met You”, it was hard to leave the stage for the other overlapping acts. Back in the Solar Dance Tent, ravers were trashing to Rusko as he played an array of heavy dubstep tracks like “Hold On” and “Everyday”. EOTO, a side project created by Michael Travis and Jason Hann of String Cheese Incident, played their improvised electronic set on the Lunar Stage. Unlike most acts, EOTO does not pre-recorded loops and instead utilizes a variety of acoustic instruments and synthesizers to create beats on the go. Devoted fans swarmed the stage danced non-stop for the hour-long set. 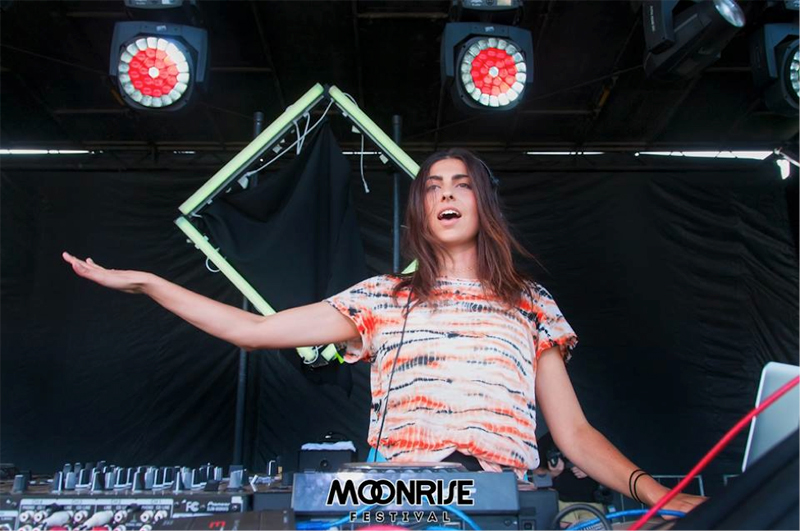 Continuing their festival circuit, Zeds Dead once again blew the crowd away with their signature “blitzing” dubstep. The restless crowd was practically spilling out of the sides of the Solar Dance stage for their performance. Their set included crowd favorites such as “Adrenaline”, “Rude Boy”, and “Rumble in the Jungle”. Of course, the duo incorporated a variety of remixes like “Purple Haze” by Jimmy Hendrix and a drum-and-bass remake of “Somebody to Love” by Kanye West. The hour-long set was closed out by “Collapse”, the emotive first song of their latest EP, Somewhere Else.

The versatile jam band Lotus read the crowd very well and compiled a very active set to please the attendees, including their acoustic version of Deadmau5’s “Ghosts ‘N’ Stuff”. 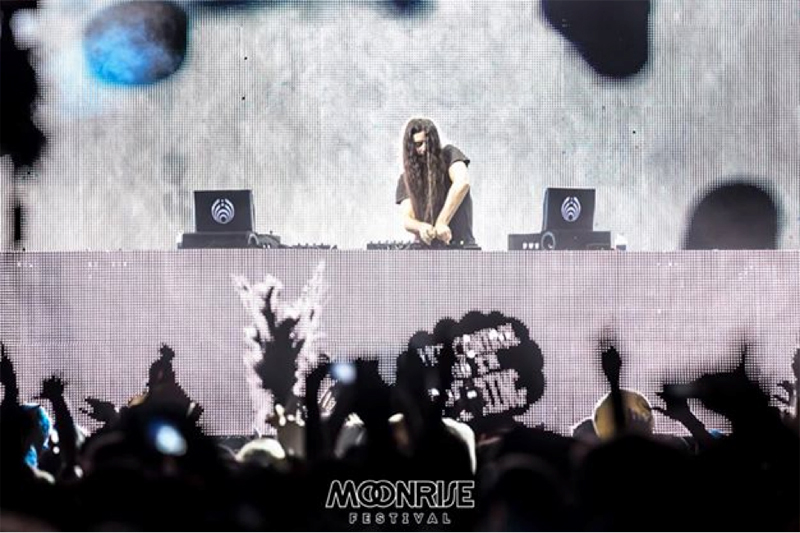 The crowd at the Lunar Stage almost quadrupled in size for the most anticipated act of the weekend: Bassnectar. Many in the audience (including yours truly) were extremely let down by the cancellation of his headlining performance at Hudson Project (QRO recap), so expectations were high for this final set at Moonrise. Of course, he did not disappoint. After asking the audience to scream at the enormous super moon up in the sky, Lorin Ashton threw down a variety of old and new songs from his repertoire, including “Voodoo”, “Pink Elephants”, “The 808 Track”, “Pink Elephants”, and “Noise” – there couldn’t have been a better way to close out final day of such an amazing weekend. 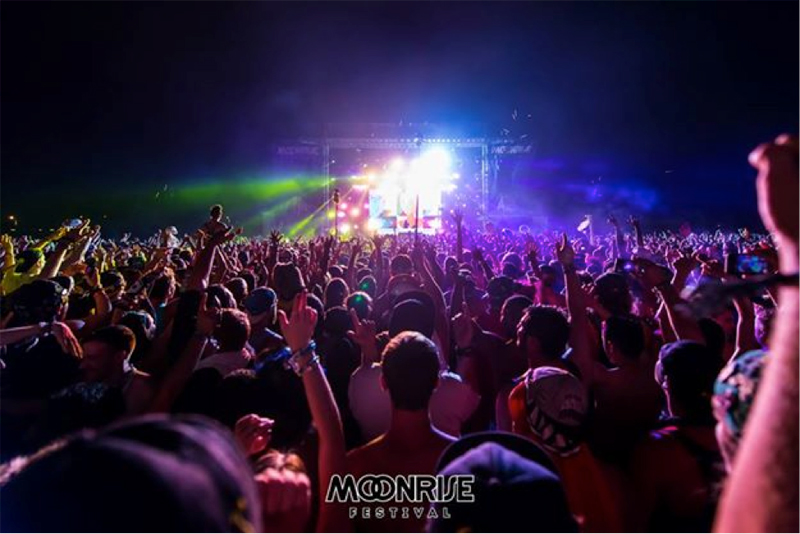