<img src="http://www.qromag.com/wp-content/uploads/2011/09/morningparadesep26.jpg" alt="Morning Parade : Live" />It was obvious from the crowd reaction at Scala that Morning Parade have built a loyal audience with their few singles to...

Click here for photos of Morning Parade at CMJ 2013 in New York, NY in the QRO Concert Photo Gallery

Click here for photos of Morning Parade at The Cockpit in Leeds, U.K. on December 2nd, 2011 in the QRO Concert Photo Gallery

It was obvious from the crowd reaction at Scala in London on Monday, September 26th that Morning Parade have built a loyal audience with their few singles to date, and at their best you can see why.  “A&E” in particular is a combination of pounding beats with heavy guitar riffs and a massive accusatory chorus of, “This is not an accident!”, like Delphic (QRO photos) if they were out to get fists in the air as well as feet moving.  One newer song posed the question, “What would happen if you bolted Robert Miles’ Children onto anguished rock?” and came up with an excitingly positive answer.  A short and tender ballad towards the end of the set, backed by little more than guitar, showed a decent way with a lighter touch too. 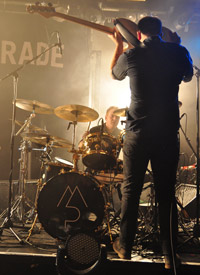 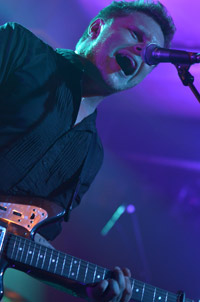 Unfortunately, that touch and the dancier beats both deserted the band for large parts of a set bulked out with earnest mid-tempo ballast.  Most of it could have been mistaken for mid-album filler by any number of mid-table mid-noughties bands, from Thirteen Senses to part-namesakes Morning Runner.  There were long stretches when you wished Morning Parade could bring any kind of distinctive identity into the songs and during which it was difficult to imagine them ever making it to anywhere bigger than the limited confines of Scala.

Some ill-advised banter about their “fit female fans” could do with dropping fast if they don’t want to limit their audience still further, too.  However, as they encored with another pulsating single in “Under the Stars”, it’s clear again that there are some flickers of potential here.