Morrissey – I Am Not a Dog On a Chain

Hopefully no matter how many silly publication spars, ill advised political battles, mortality bouts, or “The Secret of Music (Industries)” notions Morrissey has, some of this old sense of... 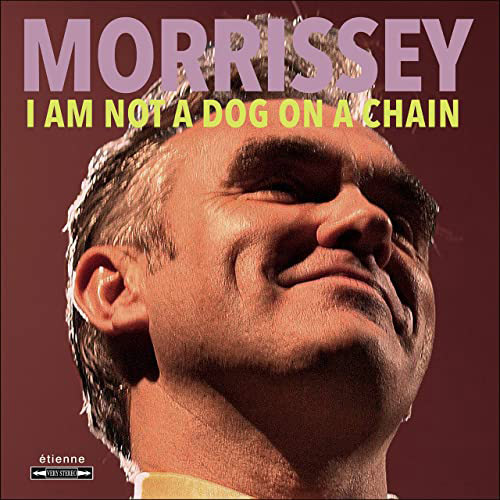 “Fair enough”, the truth seen in this phrase from the song “I Started Something I Couldn’t Finish”, and more life in one older song than the anger, which pointedly is seen almost overwhelmingly on I Am Not A Dog On A Chain, alongside some decent music, even if as expected, it is far from that early mood.

Granted, “Bigmouth Strikes Again” or “Money Changes Everything” and anything off of Viva Hate or Vauxhall and I are superior, but at least, even if Vauxhall did it better, “Bobby Don’t You Think They Know?” is familiar to the nicer side of Morrissey.

Click here for photos of Morrissey at Forest Hills Stadium in New York, NY on September 7th, 2019 in the QRO Concert Photo Gallery

Click here for photos of Morrissey at Theatre at Madison Square Garden in New York, NY on December 2nd, 2017 in the QRO Concert Photo Gallery

Click here for QRO’s review of Morrissey at Roseland Theatre in Portland, OR on November 30th, 2014

Besides, though there are better notions in a lot of his music, positivity wise, Morrissey, seen in early years (and burglaries) as well as specifically the Vauxhall opening number, “Now My Heart Is Full”, is now better equipped to be both incisively moving and nice. Politics aside, one wishes he was always like this.

Composition wise, the melodies are good, and the guitar is amazingly fearsome, opening with “Jim Jim Falls” was genius, even the drums, orchestra, and basswork are fine, while most importantly the vocals are superbly rising, harmonious, and aurally really emotionally there, with background singers too, if sometimes the strain of singing makes the whole affair limited in a newer way.

Personal, is the bottom line here. Forward, upward, and liberally open music is in the better numbers like “The Secret of Music” or “Jim Jim Falls”; then fluidly, and cyclically composed riffs, voice, and licks drive in those as well as the middle of the road tracks such as “My Hurling Days Are Done” or “Bobby Don’t You Think They Know?”. Most everything on here, even, lesser tracks like “The Truth About Ruth”, are forward and relaxing sounding music, lyrically or otherwise. At one point during “Once I Saw The River Clean” Morrissey claims, “Look into the buried eyes / But only if you want the truth,” and this is what one needs to take from this release, your choice is yours, but he is relaxed about it either way.

Could one artist emerge as more important than the sum of his parts, well given songs like “Darling, I Hug A Pillow”, “What Kind of People Live in These Houses?”, “Once I Saw The River Clean” and “Jim Jim Falls” are actually surprisingly intimate for the later, angrier, and still poetically disheveled Morrissey, it is possible. Where others like “Knockabout World” and “Love is On It’s Way Out” are more disturbing and aggressive than anything, these are still strong, centerpiece type numbers like earlier releases could be, in equally aggressive, but touching “One Day Goodbye Will Be Farewell” or “The National Front Disco”.

Hopefully no matter how many silly publication spars, ill advised political battles, mortality bouts, or “The Secret of Music (Industries)” notions he has, some of this old sense of touching and really reaching vulnerabilities sticks around. Morrissey once represented an enduring and tremblingly strong hand to reach for (see the Live At Earls Court cover), perhaps he still can with I Am Not A Dog On A Chain.