<img src="http://www.qromag.com/wp-content/uploads/2009/12/morrisseynov30.jpg" alt=" " class="alignright" />Morrissey brought his West Coast tour to Portland, a town he hadn't been to in seven years.<span>  </span>This meant the sold out crowd was... 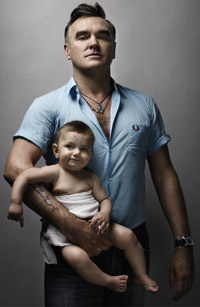 Morrissey brought his West Coast tour to the Roseland Theatre in Portland, Oregon on November 30th to support his latest album Swords (QRO review), a collection of b-sides released during the last five years.  Having skipped Portland during his last tour in 2007, he hadn’t been to town in seven years.  This meant the sold out crowd was eagerly anticipating their beloved.

In years past, there have always been three things one can expect from a Morrissey show.  The first is a barrage of flowers tossed onto the stage by Morrissey’s admirers.  The second is that Morrissey will inevitably tear off his shirt and throw it into the crowd.  The third is the rushing of the stage by a few lucky fans that will gleefully wrap their arms around Morrissey.  This trio of staples truly sets a live Morrissey show apart from all others.  His fans may be accused of being borderline rabid at times but when the Mozzer lets loose, the love flows freely from the man to the crowd and back again.  It’s nothing short of magical.

It quickly became apparent that things were going to be different this time around when entering the venue, as security swiftly confiscated all flowers in sight.  Not even a one-inch bud was allowed entry.  According to security, a strict ‘no flowers’ policy is now in effect as Morrissey is afraid of slipping and falling on the same flowers he’s been performing with and around for the past 25 years.  There was definitely some disappointment in the air from those who brought the flowers, but the rest of the house was buzzed with excitement.

At promptly 9:01 Morrissey bellowed to the audience, “Can you smell the roses?!” (a nod to Portland’s moniker as the City of Roses, which seemed so fittingly Morrissey to even acknowledge the fact, given the new no flowers policy).  He decided to whip the crowd into a frenzy right from the very start, opening with The Smiths classic “This Charming Man”.  Now age 50, Morrissey showed he still knows how to mesmerize a room.  With more stage presence in his pinky than most frontmen half his age, he is a performer’s performer.  Can a microphone cord be turned into a stage prop?  It can when Morrissey gets a hold of it.  He somehow manages to make it work.  If anyone else tried to pull this off they’d come across looking ridiculous at best.

By 9:30 the venue was sweltering, but the sweat soaked crowd was reveling in all things Morrissey.  His voice was solid as he serenaded his fans.  Due to some slight miscommunication with the tour manager, QRO’s photographer was thrown out of the venue for taking pictures at this point which put a slight damper on things, but the show did indeed go on with a mix of more Smiths classics such as “Cemetry Gates” and “Ask” along with some stellar versions of newer Morrissey tracks “I’m Throwing My Arms Around Paris” and “Ganglords”.  Morrissey interacted with his fans in his typical fashion.  When someone yelled, “I love you!” Morrissey replied, “It will pass.”

With the show quickly coming to a close, Morrissey’s was still donning his original shirt of the night.  That all changed when he launched into  “How Soon Is Now?” which seemed to be the crowd favorite.  His shirt came off as his fans squealed with delight while he pranced and danced around the stage.  He quickly exited and reemerged wearing a new shirt just in time for the next song.

Shortly after 10:00 the encore began with “First of the Gang” and at long last his shirt sailed into the crowd.  Up next was the Frank Sinatra cover “Swinging On a Star”.  At this point, Morrissey did shake several hands in the audience, but he was suddenly gone in a flash as the house lights and music jolted the crowd from their Moz induced delight.  It was clear that the show was over, yet not a single member of the audience had made it onto the stage.  Most in the crowd seemed shocked by the abrupt ending.  The grumbling was almost immediate as several people remarked in disbelief that no one made it up on stage, and the show was a scant 80 minutes.  However there was still plenty of all-around praise for a well-played show.

Notably absent from the evening’s play list were Morrissey tracks from his early years.  While the purpose of this tour is to promote his newer material, the complete omission of such an important phase of his career seemed odd.  Granted it took him more than a decade out on his own before he would even play anything from The Smiths, but one or two tracks of classic Moz would’ve been a nice gesture for the fans.

The quinquagenarian Morrissey proved he’s still got it.  Those who have never seen a Morrissey show probably won’t know what they are missing and should leave feeling satisfied with the experience.  Perhaps his long time live supporters will have better luck next time around.  Here’s hoping Morrissey brings back the missing elements that add to his mystique.

This Charming Man
Irish Blood, English Heart
Black Cloud
Don’t Make Fun of Daddy’s Voice
Death At One’s Elbow
When I Last Spoke To Carol
One Day Goodbye Will Be Farewell
Is It Really So Strange?
I’m Throwing My Arms Around Paris
Cemetry Gates
Ganglords
Why Don’t You Find Out For Yourself?
If You Don’t Like Me, Don’t Look At Me
Ask
The World Is Full of Crashing Bores
Teenage Dad On His Estate
The Loop
How Soon Is Now?
I’m O.K. By Myself
First of the Gang To Die/Swinging On a Star (cover)