<img src="http://www.qromag.com/wp-content/uploads/2009/11/morrisseyswords.jpg" alt=" " />Releasing an album consisting strictly of b-sides can be a risky move.  However, anytime Morrissey is thrown into the equation, all bets are off. ... 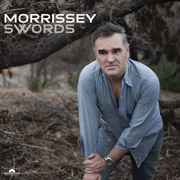 Releasing an album consisting strictly of b-sides can be a risky move for an artist.  More often than not, b-sides are called b-sides for a reason.  However, anytime Morrissey is thrown into the equation, all bets are off.  Focusing on material released over the last five years, Morrissey is still filling the niche for those who feel unlovable.  Swords contains a hefty 18 tracks and probably won’t be converting many people who aren’t already fans, but those who appreciate Morrissey’s unique self-deprecating style will find plenty to please them here.

More than twenty-five years after he first burst onto the scene, Morrissey is still able to come up with some of the best song titles in the business and Swords is no exception.  Such tunes as "Don’t Make Fun of Daddy’s Voice", "If You Don’t Like Me Don’t Look at Me", and "Shame Is the Name" (featuring Chrissie Hynde of the Pretenders) are all bona fide Moz.

Swords has several sweet and tender ballads such as "Friday Mourning", a swan song of sorts with the line "Friday mourning I’m dressed in black / Douse the house lights / I’m not coming back."  "The Never-Played Symphonies" (which finds Morrissey on his death bed) and the heavenly "Sweetie Pie" are both strong contenders for best ballad on this album.  Morrissey also manages to voice a little social commentary directed at the police with "Ganglord", and in the heavy-hearted "My Dearest Love" he laments on a lifetime of loneliness.

The Morrissey faithful will always defend their hero till the bitter end, and although Swords isn’t strictly top of the charts material, it’s still strong enough to pull a few punches on it’s own.