<img src="http://www.qromag.com/wp-content/uploads/2009/02/morrisseyyearsofrefusal.jpg" alt=" " />The iconic singer is more at ease being himself on his latest, <em>Years of Refusal</em>. ... 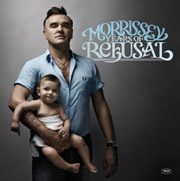 It’s been over twenty years now since Morrissey’s much-beloved Smiths broke up, over a decade since drummer Mike Joyce and bassist Andy Rourke sued Morrissey & guitarist Johnny Marr (now of Modest Mouse – QRO album review) for royalties (which put the final nail in any reunion coffin…), and five years since Morrissey returned from his self-imposed post-trial retirement.  The iconic emotional singer seems more comfortable with himself and his place on his latest, Years of Refusal, giving tracks that vary in quality, but are all quintessentially Morrissey.

The emotional voice that was forged in eighties New Wave with The Smiths has influenced countless vocalists since then (especially since the neo-New Wave revival starting earlier this decade), but Morrissey can still deliver it all on his own, and that strain holds true throughout Refusal.  From that base, the record sometimes builds and sometimes doesn’t: his classic grand emotion works well on single “I’m Throwing My Arms Around Paris” and especially the evocative “It’s Not Your Birthday Anymore”, which stands alongside classic Morrissey tracks, but pieces like “Mama Lay Softly On the Riverbed” and “That’s How People Grow Up” feel a bit like ‘paint by the numbers’ Morrissey.  The press well complements and amplifies the vocals on “Sorry Doesn’t Help”, but fails to grip on “One Day Goodbye Will Be Farewell”.

One of the nicer surprises with Refusal is when Morrissey gets a little catchier, something not expected, but certainly welcome on opener “Something Is Squeezing My Skull” and the slightly humorous “All You Need Is Me”.  There’s also a bit of a southwestern duel march with “When I Last Spoke To Carol”, Morrissey riding off into (our out from) the sunset.  But also startlingly, his normally expected darker stab “Black Cloud” and orchestral one “You Were Good In Your Time” both feel paler than what Morrissey has done before, and Refusal ends on its weakest track, the overdone, up-down without substance, “I’m Okay By Myself”.

Maybe Morrissey had something to prove when he returned in 2004 with You Are the Quarry – certainly tried to access new audiences by employing producer Jerry Finn, then best known for work with the likes of Blink-182 and Green Day.  But after slipping in 2006’s Ringleader of the Tormentors, Morrissey embraced his legacy with a Greatest Hits record and tour, perhaps re-finding himself for Years of Refusal (though for the new record he also re-employed Finn, who tragically suffered a brain aneurysm and died shortly after finishing work on Refusal, at the age of only 39).  If not a wall-to-wall collection of hits, Refusal is still a return to form for Morrissey and all these many Years.

MP3 Stream: "It's Not Your Birthday Anymore"